The Wild Music of the Gael / Ceol CaithrÈimbach na nGael

The Dorsey (Na Dorsa) is a Bronze Age earthworks in South Armagh, an area well-known for its musicians such as the fiddler Josephine Keegan (also for many years Se·n Maguire's piano accompanist), singers like Tommy Makem and Patricia Flynn and a strong story-telling tradition maintained most notably by John Campbell.  So, its mighty peculiar when a new band which features three members from the county (fiddler Paul Bradley, accordionist Martin Quinn and guitarist Paul Meehan) sounds as though it could have come from anywhere in Ireland - in contrast, say, to DÈanta who always seemed to be rooted in the North. 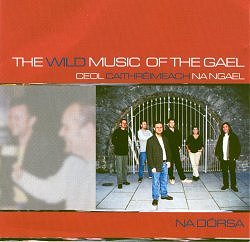 Track 5 kicks off with James Gannon's barn dance, recorded by his fellow Sligo fiddler Michael Coleman and learned by Na Dorsa from a Donegal fiddler, Colmcille ” Monach·in.  So you might imagine that a band which draws its constituents from the Ulster province would not end up producing a rendition which sounds suspiciously like a M·irtÌn O'Connor era De Dannan.  In contrast, the first track's opening set of jigs is redolent of mid-period Bothy Band.  Similarly, though singer Margaret Cunningham (from John Doherty's old stomping ground of Carrick) learned Heather on the Moor from the Kilkeel, Co Down singer RÛisÌn White (erroneously described in the sleevenotes as coming from Armagh) her version of this song simply sounds like a cross between Maighread NÌ Dhomhnaill and Dervish's Cathy Jordan.  Unsurprisingly, she also pays homage to the former with Amhr·n Pheadair Bhreathnaigh (the opening track on Maighread's No Dowry album).  However, she proves to be her own woman on the, naturally, unaccompanied Brid Bh·n (a song from Teelin where, trivia-lovers will be gratified to know, MairÈad NÌ Mhaonaigh and Dermot Byrne have recently purchased the village pub).  Elsewhere, Na Dorsa manage to emulate Calico on a composition by the Breton guitarist Gilles Le Bigot (surely either a misprint or a pseudonym!) and L˙nasa on the slip jig The Whinny Hills of Leitrim - but then anyone playing a slip jig nowadays seems to sound like L˙nasa.

None of this should be taken as a criticism of the musician's abilities, far from it as Tiarn·n ” Duinchinn amply demonstrates on the piped slow air T·imse i Mo Chodladh or in a scintillating duet with Paul Bradley's fiddle on a set of untitled reels penned by Josephine Keegan.  It's just that the album is a stylistic mish-mash drawing from too many sources to offer coherency as a whole.  Equally, like many other recent releases, the rapidly-strummed guitar is far too prominent in the mix.  Also, Na Dorsa suffer from the ëtwo bands' problem which also afflicts Solas, Dervish, Providence and even, to some extent Altan (as Another Sky demonstrated).  So, you have the all-instrumental band, and the band that accompanies Margaret's songs - and the two don't always appear to be the same.

Still, in its favour, this is a first album from a group of young and enthusiastic musicians, and at least they have been listening to the right people.  Sleevenotes are both brief and pertinent and include a marvellous description of the playing of fiddler Charlie O'Neill - 'He played Casey's Pig in the key of A and claimed that the grunt of the wild boar could be heard to echo through the ancient oaklands of the bottom string'.

The album's title comes from a question put to the Fermanagh fiddler Mick Hoy (some of whose exploits are recounted in Ciaran Carson's Last Night's Fun):

Tourist at a session: "What is the music?"
Mick Hoy: "Ah! ëtis the wild music of the Gael."