Is there a 'Balkan' music tradition or just a number of individual national or ethnic or regional traditions?  That's a question that is extremely germane to Tri Muzike's new release, Treo.

Tri Muzike is a band formed by (mainly Italian) musicians playing in a number of different Balkan traditions - including Greek and Jewish (predominantly Sephardi, I feel, though klezmer also makes an appearance). 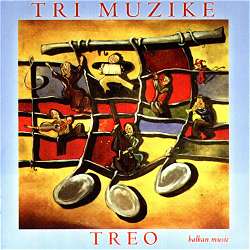 They have tried to blend the traditions in what seems almost a philosophical attempt to heal the region's rifts between nationalities and religions (Turkish/Islamic, Jewish, Orthodox and Catholic) - particularly intriguing in May 99, as NATO heads for Belgrade and the ethnic Albanians of Kosovo head for everywhere else.

The group calls the music 'contamination' - suggesting an organic approach in which different traditions act almost as viruses to change others.  However, the feel of what they play is cooler, more clinical.  The lineup looks pretty brassy - trumpet, Turkish G clarinet, two bagpipes, accordion as well as double bass and guitar - but it feels muted, sometimes to good effect (in a rather nicely understated performance of Üsküdar) but sometimes taking the edge off the music.  And Balkan music is, in a way, all about 'edge'.

Tri Muzike's performance doesn't have the usual crispness of Bulgarian and Macedonian music, in particular.  I compared the Bulgarian Krivo Oro on this CD (sound clip) with two other performances, both 'village Bulgarian' which covers a multitude of sins and isn't attributable either (tapes from friends in Sofia); the Tri Muzike version is slower, the percussion seems to set less of a rhythm, and there's a more linear, less rhythmic effect from the accompaniment.  Maybe Tri Muzike don't play for dancing, but good Bulgarian playing (just like good uilleann piping) should set feet tapping.  This performance doesn't quite.

The arrangements are influenced by jazz; in some places they sound rather palm court orchestra, and one particular (otherwise quite nice) arrangement seems to me rather reminiscent of Hawaii Five-O - with a bit of Kurt Weill cabaret music thrown in for good measure.  In Lebedik un Freilekh the group plays a slightly mocking klezmer, but deviates into almost pure jazz at one point before returning to a tighter klezmer style.

And the beginning of Stani stani,a Serbian love song of the unrequited misery-guts sort, sounds as if it could come from Weill's Mahagonny or The Threepenny Opera - it's very sleazy-Weimar-cabaret (sound clip).  There's a certain swing to the slow numbers that makes them quite attractive, and to my mind more successful than the Horos and Kolos (faster, dance numbers).  The more intricate arrangements also come into their own when the listener has leisure to follow the individual lines.

The other major influence appears to be Middle Eastern, perhaps classical Arabic or Persian, or Sephardi (a lot of modern Sephardi groups take their instrumentation and approaches to improvisation, rhythm, and ornament from Arabic style, as did a number of the pioneer medieval music groups such as Thonmas Binkley's Studio für Frühen Musik).  It doesn't seem to sit too easily with the more jazzy elements of the group's style.  Perhaps when they release their next CD they will have made the different strands cohere a little more.

Is the rather cool response I had to the CD a reflection of the group's attempt to create a hermetic tradition?  I'm not sure.  I do have an impression that most fusions come about as a result of individuals working with each others' very defined traditions.  For instance, Show of Hands' work with Latin American players to create Alleanza depends to some extent on the distance between the traditions - most intriguingly encapsulated in a simultaneous performance of Adieu my lovely Nancy (I think that's what it was, but I can't now find the tape!) together with a Chilean tune where the two lines create a highly contrapuntal texture and there is no attempt to 'blend' the traditions at all.  The fact that Tri Muzike are not 'in' any tradition, but floating between traditions, may have something to do with the lack of real conviction.

Still, I did warm to the CD after a while.  I certainly would like to see what these guys do next.

The liner notes (in Italian and English) are interesting.  They actually specify the maqam of many of the pieces.  I'm certainly not an expert on tuning systems, but I'm not aware of any practising Bulgarian players who would define makams, just as few folk singers would tell you that they're going to perform a song in mixolydian mode…  It strikes me that the group have applied an Arabic music definition to other cultures, in a rather theoretical way, which bears out my feel that the Middle Eastern influence is rather stronger than the purely Balkan.  It's a pity, too, that though the notes on many of the songs are interesting, they don't include the full lyrics.

There's some virtuosity missing, too.  Patrick Novara is not a bad bagpipe player (though his pipe has, according to the notes, a Galician gaita chanter and a Macedonian gaida drone…

a weird combination, and with perhaps too soft a drone for the strident chanter) but his ornamentation doesn't have the flair and variety, and sheer finger-flying bravura of, say, Ahmed Saliev's (sound clip - Tsonkinata, from Song of the Crooked Dance).  Unfair comparison, I know.

Taking another bagpipe player - better known for his kaval playing, though Welkya (Gega New GD 141) does contain a gaida appearance in Ballad about a puffed up bagpipe - as an example, 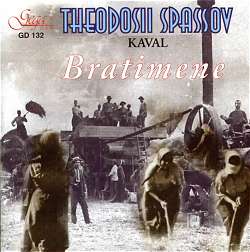 I'd like to compare the way Theodosii Spassov works with the Bulgarian traditions of music and folklore.  He, like Tri Muzike, is not a 'traditional' artist in that he is a free creator not working within the bounds of a tradition, but employing techniques of jazz and more recently ambient music to create a distinct soundworld.  However, I find Spassov's music more interesting, though the jury's out on exactly what it is he creates.

For instance on Bratimene, the first track, a horo with kaval, is very unusual in feel with a jazz or even Latin percussion element, but the kaval still goes into the standard horo rhythmic mode - even though the tune isn't a traditional one, you recognise it as deriving from the tradition.  The staccato playing feels quite traditional to me, even though mode and tune are new.  Spassov seems to have taken the asymmetrical, repetitive (almost obsessive)

nature of traditional gaida and kaval music, and accentuated it.  For instance a later track on this disc has a wonderful moment (sound clip) when the kaval is twinned with tenor sax playing the same staccato, asymmetric line; the contrast of the two timbres and octaves creates an effect of polyphony which isn't really there.

Spassov's treatment seems more wayward than Tri Muzike's.  At times he is just purely jazz, at times almost completely traditional.  And yet altogether, he strikes me as pushing the music much further - he's not trying to synthesise existing traditions, but instead experimenting within two different traditions in both of which he's worked.  Perhaps, so far, Tri Muzike have not been experimental enough?

Drumovi's Zabe i Babe CD sells itself as 'a dance party laced with hard-core traditional Balkan singing', which led me to expect the replacement of zurno-and-tupan by drum-n-bass. 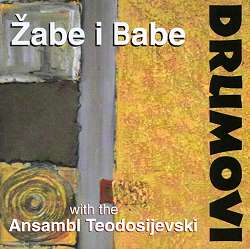 The fact that the title translates as 'frogs and grandmothers' didn't make me feel any better about it as I dubiously fed the CD to the E-drive on my PC, and waited…

Fortunately, the CD isn't nearly as bad as it sounded from the publicity.  It's not 'real folk music' and it doesn't pretend to be.  It includes two songs by Goran Bregovic, for instance (one of which sounds suspiciously like Italian MOR pop), and another recent Sarajevan hit, as well as various traditional songs in different arrangements.  But the ethos of the record is what most of us would recognise as real 'folky' values - recorded live in one room and "in Jim's backyard"!  The dance music has a real dance feel to it.

The traditional ethos and non-traditional arrangments are echoed in the notes, which mention the sources for most of the non-composed tunes; one was learned from a singer, the others from recordings (presumably field recordings by participants).  That's 'sort-of' oral tradition, though not as we know it.

If this record reminds me of anything, it's Fairport and Pentangle.  It seems to take the same rocker's approach to the folk tradition, and indeed the opening of track 6 is very Folk Revival, a gentle electric guitar solo accompanying a hypnotic, suspension-laden vocal line.  The final track on the album is a harder-driving, much rockier number, with enigmatic words

("The tall tree has no shade, the wide field has no end") - again, the arrangement creates quite a mysterious effect by layering a sinuous, repetitive vocal line over quite jazzy drums (sound clip), so there are two distinct things happening at the same time, counterpointing each other.

Maybe I shouldn't have been so surprised.  Two of the band members (Tim Eriksen and Peter Irvine) are in Cordelia's Dad - a band that does the same rather rocky things to American hymns, with (I think) great success (and who incidentally do quite a lot of research into old songs and tunes themselves).

On the other hand there's one number (Track 4) that you could mistake for Italian pop.  The musical style is similar, though the lyrics are a bit more literate.  It's actually by Bregovic.

I was less sure about the unaccompanied songs.  They're more traditional, maybe, but most of them were lacking the swing that the Macedonian Roma musicians of the Ansambl Teodosijevski bring to the band tracks.  The 'Balkan' singing is described as 'hardcore' and that's what it is, taking vocal stretches to a mannerist extreme that occasionally is just damn ugly - but never anything less than totally committed.  On the other hand the sjecanje or 'cutting ornaments' of the mountain songs, basically a tonal oscillation, is fascinating - it seems to have developed in the same way as yodelling, as a method for yelling across valleys more effectively.  There's also a rather interesting song to charm the queen bee and her swarm into a new hive, together with sounds of clicking and whistling - certainly beekeeping is a Serbian speciality (when I walked in the Frushka Gora before the Bosnian war, there were beehives everywhere, even loaded up on articulated lorries to be driven into the hills, and one of the ethnographical museums was putting on a display of beehives).  Certainly this is a band that dares to experiment, and if it doesn't always result in success, at least there seem to be some risks being taken, unlike so many 'folk' recordings today where the main value appears to be carefulness.

The notes are pretty good, though alas, not always with full translations and with no Serbo-Croatian lyrics at all.  Still, in what's obviously being sold as a 'pop' rather than musicological recording, one has to be thankful for smaller mercies.  There's certainly enough to whet the interest.

Oh yes … frogs and grandmothers.  Apparently that's a Serbian phrase that means 'apples and oranges'.  Or chalk and cheese?  Certainly, on this hearing, the combination works rather better than that would imply.