Born in Belfast in 1961, Marcas comes from a line of flute-players on his mother's side.  It was she who encouraged the young Marcas to seek out the musical company of fine old flute players such as Josie McDermott, a distant relative from Co Roscommon and Packie Deignan from Co Leitrim; pictures of the young Marcas with these two proudly adorn the album booklet [but too small to reproduce here].  He plays tunes learned from both of them, including some that were not included on either of their 1970's Topic albums.  Others come from other great Irish players such as Paddy Taylor, Matt Molloy and Cathal McConnell, but here is a distinctive stylist that could not be confused with any of these.

He has absorbed a great deal of the North of Ireland style and repertoire of flute-playing, but clearly this is not enough for him and he sets out to demonstrate the range and capacity of the flute in Irish traditional music in this very carefully programmed, full-length (72 minutes) album.  He maintains interest by judicious changes of key, using different toned flutes throughout, even a bit of tin whistle to ring the changes. 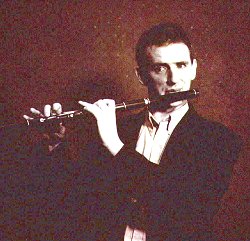 Just when the mood needs changing, there is change of tempo or he breaks up the tunes with the occasion song in Irish in a pleasant dry-toned voice.  The most interesting of these is probably the translation by Liam Mhic Charráin into Irish of The Flower of Sweet Strabane.

We hear him playing solo, but also in some very compatible partnerships.  Perhaps the most successful of these is the instinctive close understanding that he shares with fiddler Maurice Bradley, close followed by some fine duos with the accordion of Peter Gallagher.

He shows a different side of his talent in sharing some planxties with the harper, Eoghan O'Brien from that fine traditional group, Déanta.  However, it is when he is playing reels flat-out that he is at his most exciting, for his masterly technique is such that he is always in full control.

The set of three reels Patsy Hanley's, The Piper's Broken Finger and The Cocktail are a real tour-de-force and form the outstanding selection of a very fine bunch.  The start of these has been chosen for the sound clip.

Marcas has been a leading teacher of the flute for a number of years, including playing a leading role in the Willie Clancy Summer Schools.  His highly-recommended first album shows him to be an outstanding and creative interpreter of traditional music.