Ireland has many musical dynasties and one of its most influential is the Mulligan clan.  Tom ('TP') Mulligan, who died in 1984, originated from Barnacoola (Barr na Cúille) 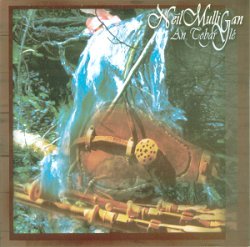 in County Leitrim and left his native county at the age of nineteen to work in Dublin in 1935.  Tom had first heard the uilleann pipes three years previously when he saw Leo Rowsome play at Mohill and, once he had arrived in the capital, acquired his own set, developing the musical skills which he had already acquired on the fiddle.  Indeed, aged twelve, he had made his own first fiddle from tea-chest plywood.

In Dublin Tom met fellow piper Tommy Reck, forming a lasting friendship, and married Catherine MacMahon, from Beale in North Kerry and their home in North Dublin proved such an open house to musicians that it was termed the ‘Rotary Club’ by Séamus Ennis.

The couple’s children all proved to have musical talents too (and Tom also runs The Cobblestone pub in Smithfield), but it is Néillidh (born in 1955) who has become the best known

1.  He began learning the pipes from his father at the age of eleven, progressing to classes with Leo Rowsome during the week and at The Pipers’ Club on Saturdays, learning rapidly and surprising nobody by his natural aptitude for the instrument.  Indeed, he won both the All-Ireland under-14 and under-18 titles in his teens, but gave up competing after the latter success, preferring not to vie for honours with his friends.

Yet his musical education was not purely formal.  As Neil recalls: “My father was a great man for jumping in the car - for Leitrim, Galway, wherever ...  Maybe down to play with Packie Duignan for a weekend, then he would come home as happy as Larry.”

2  Indeed Neil’s tours with his father, playing as a pipes and fiddle duo, saw him meet and learn from many famous musicians: “When I was with my father, you’d be constantly bumping into people who turned out then to be regarded as legends today.  I remember meeting Ed Chisholm from New York who knew Michael Coleman.  I met Lad O’Beirne once, up in Fred Finn’s sister’s house in Bunninadden.”

3 Then there would be regularly sessions with Willie Clancy, Felix Doran and the McCarthys (back over in Clare from London each summer).  There was also the Joe Heaney connection - Neil and his father played in the concerts the singer organised on his trips back to Ireland and it was at Heaney’s funeral in 1984 that the pair played together for the last time, for Tom died two days later.

That sense of history and the importance of learning from the past have inspired each of Neil Mulligan’s three solo albums of piping from Barr na Cúille released in 1991, via 1997’s The Leitrim Thrush to this year’s An Tobar Glé (The Clear/Bright Well)

4.  Moreover, before examining the latest album, it is worth quoting him once more on the subject of solo performances: “Unless you’re into buying and listening to CDs, there’s no place to hear it.  There’s nowhere like Slattery’s

5 today.  And music is all speeded up – everybody seems to have a bouzouki or guitar player in tow.”

6 (Indeed since that comment was recorded the number of unaccompanied instrumental CDs has declined even further.)

So, as expected from the above, it can be safely revealed that An Tobar Glé is a bouzouki- and guitar-free zone (and the bodhrán is mercifully absent too).  Instead there are fourteen tracks featuring simply Neil’s sublime piping and two at the end are home tapes of father and son duetting in 1982, recorded by Neil’s brother Alphie.  The album’s title derives from the name of a traditional music club run by Séamus Ennis in the 1970s in the aforementioned Slattery’s where Tom and Neil Mulligan and the Connemara sean-nós singer Máire Áine Ní Dhonnachadha were the resident musicians.  That information is amongst the wealth of detail provided by Neil in his notes for the liner, itself beautifully designed by Édain O’Donnell and featuring archive photographs, including ones of Ennis, Tommy Reck, and Tom and a young Neil playing in the company of another Connemara sean-nós legend Seán ‘ac Dhonncha.

The sean-nós references are important too, for much of Neil’s playing on An Tobar Glé has been inspired by the singers he has heard on his travels, especially his renditions of A Stór Mo Chroí and Táimse im’ Chodlach, both derived from ‘ac Dhonncha, and Dónal Óg, learnt from Caitlín Maude, the poet, playwright and singer who died at a young age in 1982.

As for the music itself, it is a dazzling piping confection, as anyone who has heard Neil’s previous albums or seen him play live might naturally expect.  The album commences with a couple of jigs, The Gold Ring and Sixpenny Money, learned from Séamus Ennis and played here in suitably sprightly fashion and (one of Neil’s trademarks) exceptionally subtle use of the regulators.  In total contrast, the next tune, Caitriona Rua, written shortly after his mother’s death, is fittingly dolorous yet the air carries, via Neil’s construction, elements of hope and happiness.

The third track comprises a pair of hornpipes, The Blackbird and Miss Galvin, the first of which derives via the flute player Seán Ó Broin from another Leitrim fiddler, George Rowley

8, who had also migrated to Dublin.  The second comes from the late Roscommon flute player Peg McGrath

9 and carries all the jauntiness one would expect from someone rooted in the North Connaught tradition.

Track four offers a combination of the well-known reel, The Stoney Steps, and another of Neil’s compositions, The Dooneen Reel (the farm where his mother lived before her marriage bordered the Cliffs of Dooneen, themselves, of course, the subject of a familiar song).  Again, there’s a strong contrast here with the remarkable rendition of A Stór Mo Chroí which follows where Neil’s playing conveys all the intricacies of Seán ‘ac Dhonncha’s singing style without ever over-icing the cake.  Indeed, the refinement of his vision is equally emphasized on the subsequent Bímis ag Ól ‘s ag Pógach, a jig learnt from Willie Clancy which Mulligan does not so much play, with much trilling and popping, as explore!

Séamus Ennis’s father, Jim, is the source for the first tune in the next coupling, The Morning Thrush and the extremely popular piping tune Colonel Frazer in the unusual four-part version favoured by the Ennis’s.  Following these come two tunes (an air and a hornpipe) collected by the younger Ennis - Is Fada mo Chosa gan Bróga which he acquired from the singer Nóra Ní Ghallchóir from Gortahork, Co Donegal, and a tune from his Scots travels, Castles in the Air.  If anything, this is the weakest track on the album, even though Neil’s interpretations of both tunes are delicate and lacking extravagance, for the simple reason that the pairing of these two somewhat disparate melodies does not quite work.

In his notes to track nine, Neil records that his father was the source for many of his tunes and the first jig, East of Glendart, is one such, while the second, the bearer of the most macabre title in the Irish tradition, I Buried My Wife and Danced on Top of Her, comes from Willie Clancy.  The latter is one of the breeziest jigs around and it is played here with appropriate zest, with Neil again reinforcing the melody through his regulators.

Neil is extremely fond of hornpipes and two more now follow.  The Peacock’s Feather comes from Breandán Breathnach’s Ceol Rince na hÉireann, while its partner, Boys of Bluehill was learnt many years ago from Leo Rowsome and it’s possible to detect some of the characteristic intricacies of the tutor’s touch in his pupil’s recording.

Following another delightful air, Dónal Óg, comes another pair of jigs, both composed by the Mulligan hand.  The former is the album’s title track while the latter, Oileán na Meannaín, takes its name from an uninhabited island off the Mayo coast - both played sweetly and perkily. Heading down the home stretch takes the listener first to three reels which need little explanation, The Fairy Reel, The Pigeon on the Gate and The Merry Blacksmith, though Neil notes that the first of the trio is also known as The Jolly Banger in County Clare.  The last solo tune, Táimse im’ Chodladh, is a gloriously sonorous air derived from the song whose lyrics envisage 'the day when the English are harnessed and ploughing the fields', laments oppression and emigration and concludes by calling for a rising against the English and their casting into the sea.

As mentioned earlier, the two final tracks are the home recordings and, although their sound quality is obviously poor in comparison to the wonders of a modern studio and mastering systems, they both amply convey the magical element which inspired the playing of the two Mulligans.  The first track consists of a trio of reels (The Fermoy Lasses, The London Lasses and The Rose in the Garden) while the second cheekily combines Chase Her Through the Garden and Kiss Her in the Furze, providing utterly joyful music on both counts.

All told, An Tobar Glé is an unquestionably exquisite example of the piper’s art and confirms Neil Mulligan as one of the instrument’s supreme contemporary exponents.  The album is distributed in the UK by Copperplate - http://go.to/copperplate - and Neil’s website is the readily memorable www.neilmulligan.com

[1] The nickname ‘Néillidh’ was ascribed to Neil by Séamus Ennis in honour of the Donegal fiddler Néillidh Boyle (Neil O’Boyle).

[4] Next time I meet Neil I must ask him if he’s working on some idiosyncratic six-year cycle.

[7] Gael-Linn has finally got around to releasing Caitlín Maude’s only album (originally released in 1975), Caitlín, in CD format.  She was one of the founders of the Dublin traditional singers’ club An Bonnan Buí.

[8] Indeed, the first tune is sometimes called George Rowley’s Blackbird and was recorded under this title by the group Bakerswell on their self-titled release (Claddagh CCF 20).

[9] Peg McGrath was taught by Josie McDermott and can be heard on the Outlet release Cherish the Ladies (PTICD 1043) recorded with Kathleen Smyth and Mary Mulholland.