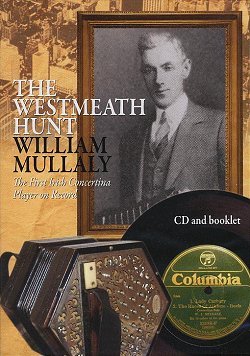 This CD is a reissue of the 1992 Viva Voce cassette of Mullaly's entire recorded output covering 10 sides but is much more than a simple re-release on a better medium.  The original biographical notes by Harry Bradshaw are still here but the accompanying booklet includes an analysis of Mullaly's playing style ornamentation and technical approach to the mechanical use of his instrument written by Jackie Small; a discography from Nicolas Carolan and detailed transcriptions and analysis of all the tunes by these two as well as Treasa Harkin and Orla Henihan.

William Mullaly had the distinction to be the only concertina player to be recorded commercially in the first half of the 20th century, and yet his playing demonstrates a style that became virtually extinct in the second half of the century.  The 10 tracks were recorded in three separate sessions in March and November 1926 and June 1927 and were originally released between June 1926 and November 1927.  It is worth noting that the pitch of the instrument on all 10 tracks has been standardised, resulting is some changes of pace between recording sessions.  These changes don't really affect the listening, and the recordings have been very well restored, with little of the hiss and crack that some 78 collections suffer from.  All the tunes played are jigs or reels and the sides are mostly a medley of two tunes.  As was standard practice at the time, all ten tracks clock in around the 3 minute mark so there is half an hour's listening.

Piano accompaniment, especially in the 1920s and '30s, was notoriously variable, to the point of leaving the modern listener wondering if the pianist had ever heard an Irish reel before.  Fortunately both Ed Geoghan and Ed Lee were better than many, and Lee in particular shows a canny knack of knowing the concertina player's setting well enough to appear to be playing in duet with him; certainly he carries on recognisably playing the tune at the end of The Ivy Leaf.

Mullaly's style on what was probably a 20 button Anglo concertina is described as one-row press and draw by Jackie Small's notes.  The nearest comparison is the one-row accordion or melodeon player who gets drive and punch from playing in the main key of the single row.  A few of the older generation of concertina players, some recorded in the '70s and '80s in Co Clare played in the same punchy driving style that seems ideally suited to dancers.  Most modern concertina or accordion players play cross fingered shapes on chromatic instruments that need more than one row to give the notes for G and D, the most common basic keys in Irish music.

The way Mullaly plays may sound unusual today but he stands comparison with contemporaries Joe Flanagan or Peter Conlon, probably the greatest box player of the 78 era.  His playing of The Mason's Apron, here titled Lady Carbury is characterised by superb control, using simple finger and bellows driven ornamentation, and some doubling across octaves and he continues to drive the music along with a very danceable rhythm into The Race of Athlone.  Mullaly's greatest hit with the record buying public was the pairing The Green Groves/The Ivy Leaf which stayed on HMV's catalogue until 1955.  This pair is one that many session players will still recognise as a natural pairing in the same way that Coleman's medleys are still retained.  Some of the other sets are, sadly, little played these days.

The booklet sets this release apart from many CD releases of 78s.  The detailed analysis of Mullaly's way of playing, use and range of ornamentation enables the listener better to understand and appreciate why Mullaly shifts the pitch of tunes to fit his basic D shapes or why he changes the setting of tunes like The Liffey Banks to build more of the first part around D which enables him to substitute the otherwise out of key C# for C-natural when he doesn't play the natural note.  Interestingly, Patsy Touhey and other pipers recorded at the turn of the 20th century rarely played C-natural when playing in G major.  Music readers have the additional benefit of transcription of all the tunes as they are played once round.  For comparison, O'Neill, O'Farrell and Ryan's versions are provided for some of the more common pieces.

The addition of the academic background and analysis puts this release, albeit on a smaller scale, on a par the great work done by the likes of Jackie Small and Pat Mitchell on the great pipers, Ennis, Clancy and Touhey.  The fact that a lot of the booklet is quite technical means the CD probably remains more of interest to the enthusiast than the casual listener, although the music is certainly an enjoyable listen.  None the less it stands as a very important addition to the general understanding of the development along the way as this relatively recent instrument became an integral part of the Irish music scene.  The Irish and Northern Irish Arts Councils as well as the Micheal O'Domhnaill Ciste/fund have supported the project, and the whole thing has been nicely packaged by ITMA.