Notes From The Heart

The New Found Out; The Drunken Landlady; The Thrush In The Storm / Billy McCormack's; An Seanduine Doite; Maguire's Kick / Her Long Golden Hair; The Cameronian Highlander / The Road To Cree; John Egan's; Sarah Hobbs / Mike Rafferty's; Bimis Ag Ol ; The Lark On The Strand / Charlie Mulvihill's; Farewell To Ireland / Joe Banne's; The Road To Glounthane / The Bag Of Spuds; A View From Across The Valley; The Galway Rambler / The Whistler At The Wake; The Humours Of Glynn / Cooley's; The Virginia; Master Crowley's / Lady Gordon; The Rainy Day; Barr Na Cuile / The Shaskeen; The Banks Of Lough Gowna / The Green Mountain; The Hearty Bucks Of Oranmore / Padraig O'Keefe's No 1; Padraig O'Keefe's No 2; The Humours Of Ballydaly / Gathering Sheep; Lad O'Beirne's; Paddy's Gone To France / Paidin O'Rafferty; John McHugh's; The Fog In The Bog / The Leitrim Lilter; Patsy Touhy's; The First Month Of Spring.

Compared with most things in life, my list of pet hates in Irish music is not particularly long.  Nevertheless, it includes bodhráns, bouzoukis, guitars, harps, pianos, spoons, tight ensembles, family bands, and CD titles like the present one. 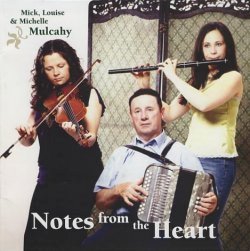 Therefore, by every law of motion which ever descended on Newton, this disc should have been sent on the shortest possible route to my local charity shop.  The fact that it has been wedded to my CD deck ever since it arrived does not mean that I have repealed or rescinded my stock of personal prejudices.  It simply means that that this record is so good that it defies the musical equivalent of the laws of gravity.

How so?  Well, for starters, the members of this tight little family band are first class and versatile, and they know how to hold the listener’s attention.

The line-up consists of the accordion and melodeon player, Mick Mulcahy and his two daughters, Michelle (fiddle, concertina, harp and piano) and Louise (flute and uilleann pipes).  They are assisted by Cyril O’Donoghue on the bouzouki and guitar and Tommy Hayes on the bodhrán. (Sound Clip - The New Found Out)

Between them, they work through a varied and attractive set of jigs and reels, which are interspersed with two sets of flings and one set of slides.  The variety is enhanced by the fact that the programme ranges between trios, duos and solos, while the melodies range from the well known to the relatively unknown.  Moreover, it is evident from the booklet notes that a lot of research has gone into finding some of them.  Surprisingly, there are none of the usual obligatory slow airs, which are so beloved of this reviewer.  Truth to tell though, I enjoyed the record so much that I scarcely missed them.  What’s more, buíochas le Día, there are none of the usual obligatory, and often dreadful, guitar accompanied vocals.

There are though, two harp solos.  With these in mind, I shall wheel on my stock of dislikes.  Pride of place naturally goes to the bodhrán.  This instrument has, like Spike Milligan’s Irish tenor, become known and hated the world over, purely because the vast majority of bodhrán players can neither play the thing or understand its role as a supporting instrument.  Anyway, I’m not sure whether this is a result of sensitive handling or sensitive recording, but the instrument here does exactly what it is supposed to do.  It adds a nice rhythmic pulse to lift the melody and propels it forward.

As with the bodhrán, bouzouki and guitar players often deserve painless castigation, for driving their instruments to the point of tasteless excrescence.  For me, however, they pose a further problem.  It is that the bouzouki, and to a lesser extent the guitar, are relative newcomers to Irish music.  In fact, their widespread use post-dates my involvement in the stuff by about a decade.  The consequence is that I cannot get used to, or enjoy, the noise they make.  Yet, while Cyril O’Donoghue’s playing is more prominent than Tommy Hayes’ bodhrán, his accompaniments are skilful and tasteful, and he never commits the sin of trying to dominate the music.

Which brings me to the aforementioned harp solos.  These, for me, were the disc’s only real let down.  Now, the harp is assuredly the oldest and arguably the most aristocratic of all stringed instruments.  In Western and Third World art musics alike, it has an ancient and noble lineage, and Mozart and Handel both composed magnificent concertos for it.  Moreover, it was enjoyed in the great houses of Ireland by native Gael and Saxon usurper alike.  But we are dealing with a vernacular dance music tradition,

of which the harp was never a part, and I do not believe that the harp is structurally capable of doing justice to that tradition.  Moreover, while the playing here is no less skilful than that of the rest of the album, I do not hear anything in these two sets to make me amend that belief.  I must say though, it made a most agreeable complement to the flute solo on track 8. (Sound clip - The Bag of Spuds)

Propriety stops me from detailing my loathing of spoons players.  Instead, we shall take a brief look at the bilingual booklet.  It is nowhere near as bad as one I’ve seen lately, but it has its shortcomings nonetheless.  First of all, I hate to describe another writer’s work as naive and romantic, but Peadar Ó Riada’s introduction is tinged with the kind of romantic naiveté which characterises far too much writing on Irish music.  Moreover, Ó Riada is credited with being the sole author of the sleeve notes, as the booklet credits call them.  However, the notes to the tunes have clearly been written by a member of the Mulcahy family, by Mick himself, I would guess.  Incidentally, the booklet does not specify the translator.

Whoever the author of the tune notes is, s/he commendably and thoroughly identifies the sources of their material and gives us a fair bit of background information.  It is a pity that, in some cases, this could not have been fleshed out more completely.  For instance, we are told that a copy of The New Found Out can be seen in an old manuscript, but we are not told the name of the manuscript, nor where it is held.  Also, I would have been heartily grateful if the writer had used a wider range of adjectives.  As it is, the word great crops up so often that it began to, well, grate.

But this is a great record.  It is great because the musicians convey so much talent, enjoyment and vivacity that one ends up overlooking the things one doesn’t like.  That reminds me that I forgot to discuss my distrust of family bands and tight ensembles.  Let’s just say that the stereotype of excessively rehearsed kids, scrubbed and groomed to within an inch of their lives, mechanically and tediously plunking their way through Ireland’s musical heritage, because Dad says so, has no place here.  What I hear is a group of first class performers who play together because they enjoy playing together, and whose ‘orchestral’ sound has come about through long years of mutual bonding and mutual empathy.

Whenever I feel pessimistic about the state of Irish music, I shall play this CD.