This is an interesting presentation of an accomplished singer of much experience.  Having treasured her Belts wi' Colours Three: Scots songs and ballads (Tangent TGS 125 Stereo) for 25 years I took the opportunity to fire up the old valve turntable to compare the three songs common to both.  (And enjoy those earlier performances.  It is something to ponder over - that the old analogue vinyl recording remains still fresh and clear while this current release in CD form, if the pessimists are right, is unlikely to last that long. 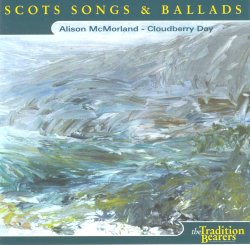 When cosmic radiation or whatever has finally shot holes in the world's CDs are we all going to have to turn to those plastic platters in the attic to recover our musical heritage, never mind all those archives, databases and recordings presently being issued solely on silver spinners?)

It is interesting that she is being released as part of Living Tradition's 'Tradition Bearers' series, for both the ethos of the series and Alison's attitude to sources fly in the face of those who insist that you can only be a 'tradition bearer' if you have aurally assimilated all your repertoire from other 'tradition bearers', preferably around an encampment fire.  Pete Heywood risks the wrath of the rigid by defining a 'tradition bearer' as one 'of a relatively small group of singers who are genuinely carrying on a tradition ...  who have immersed themselves in a tradition and have the skills to carry it forward'.  This seems fair enough in a solipsistic way, but he then goes on to say that such TBs can be recognised as 'people who have earned the respect of their fellow singers'.  I wonder how he sets about ascertaining that.  Does Musical Traditions invite nominations (from bona fide singers only)?  Admittedly it takes us well past the silly: 'I am a traditional singer - I learned my songs from Jeannie Robertson.  You are a revival singer - you learned your songs from Jeannie Robertson's records', but only as far as 'I am a tradition bearer; my fellow singers say so'.  Why can't we simply encourage people, especially the young, to sing - and give them something to get their teeth into (see final paragraph) instead of erecting even more exclusive enclosures of the elect?

Alison sings and, bless her, also passes her skills and repertoire on to both schoolchildren and the students of the Royal Scottish Academy of Music and Drama.  She doesn't care who or where she gets her words and tunes from, and indeed has spent a lifetime assimilating a wide-ranging repertoire from anyone, anything, anywhere.  She unashamedly mixes 'encampment' sources with book and manuscript material and is, indeed, happy to mix all three in the same song, if she thinks that is what will work for her.  She reminds me of the late Lizzie Higgins: always delighted to get extra verses or fresh songs or versions from anyone, singer or scholar.

So expect eclectic contents if you purchase this CD.  Of course the 'big' ballads are there, for she is scathing on her 1977 record of those who think such songs are 'archaic', but, her Edom o' Gordon (Child 178) comes via Peggy Seeger, and her The Swan Swims Sae Bonnie (Child 10) - to banjo accompaniment no less - comes from Betsy Whyte - supplemented by literary sources.  But there's also a mix of familiar (e.g. Skippin Barfit through the Heather) and less so (e.g. Twa Years O'er Young).

It is good to see how many of these songs she has brought to life from the great Greig-Duncan Collection (final Volume 8 out in April 2002 if all are spared) as well as its precursors such as Dean Christie, or collaborators such as John Ord and Pat Shuldham-Shaw.  Add in material from the invaluable School of Scottish Studies, plus friends such as Willie Scott, and you have a good mix of songs, styles, centuries and subjects.

These centuries include the twentieth; its evolving songlines are not neglected.  She gives us the 1950's Traivellers Joy from the days of the great Hydro-Electric Dam projects, her husband Geordie McIntyre's lyrical title song Cloudberry Day and - very daringly - her own tune to Hamish Henderson's famous The Flyting o' Life and Daith.  I have to confess that I have always found this last song a bit dull and dirge-like when performed to Hamish's tune, but Alison has, frankly, transformed it, and I am sure her old friend and mentor will be charmed.

I have some reservations - which are highlighted by comparing this CD with her 1977 record (or her live performances).  She is showing a tendency to slip into a reedy nasality, not unlike that employed to great effect by traveller women; it doesn't seem to sit well with her usual 'open' singing and sparing use of ornamentation.  Pace can be another problem, and a number of the songs, including her favourite Belt wi Colours Three are taken too slowly.  In her 1977 recording of The Swan Swims Sae Bonny O the pace of her banjo playing was skilfully driven forward by Aly Bain's fiddle.  In this present recording the effect is more plodding.  Unlike in 1977, there are no live tracks, which is a great pity, for that is when her trademark joyfulness comes over best.  The majority of the songs are unaccompanied, but a handful have concertina, imbira (Norman Chalmers) or fiddle (Derek Hoy).  Her daughter Kirsty joins her in a very attractive rendering of Pullin Hard Against the Stream.

This series has started at last to expand its somewhat skimpy accompanying booklets, and Alison's is both interesting and scholarly.  BUT - as I keep on complaining - there is no point in a 'tradition bearers' (or any other) series which provides neither words of the songs nor glossary.  Out of the fourteen pages, eight are used for song notes, but even these are swollen with purple passages such as: 'We stravaiged the ancient Drovers route from Peebles to the Yarrow Valley.  It was a day of glamourie (enchantment).... etc., etc.'.  The remainder are given over to descriptions of Alison and her singing, including her own, a gnomic quotation from Lorca, and advertising the series in general.  The editor should trim out such excess in order to fit those crucial texts in, even in micro-print, for not even Scots speakers will catch all that she sings and anyone else, inspired by this CD to follow her and carry on their own personal tradition (even, who knows, to be elected one day by their Fellows to the Living Tradition's Hall of Tradition Bearers), will often be flummoxed.  To modify slightly the great inscription that the city despot on Terry Pratchett's wonderful DiscWorld has had painted on the walls of the scorpion pit (in which all mime artists are suspended) 'GIVE THE WORDS!'