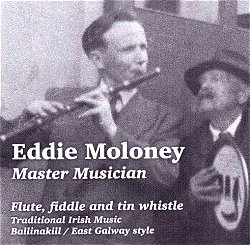 So far this has been the year of retrospective collections, with Micho Russell and Bobby Casey already reviewed in these pages.  This collection of Eddie Moloney's music is perhaps the most exciting of the lot as this is the first commercially released collection of his solo playing.  Prior to this there has been only a handful or tunes on compilations and private recordings circulating on the internet; and his playing as a member of the Shaskeen Ceili Band on two LPs recorded in the early 1970s and now long out of print.

Moloney was born in 1920 in the East Galway area of Ballinakill near Loughrea and was the son of Stephen Moloney who, with Tommy Whelan, formed the flute playing half of the Ballinakill Players who made such groundbreaking recordings in the early 1930s.  One of nine children, Eddie learned the flute from his father and later the fiddle from Jack Mulkere of Crusheen who, as well as teaching Irish music around North Clare and South Galway, also taught Irish to Lady Gregory of Coole Park.  Eddie passed his love of traditional music on to his children and it is Eddie's son Sean who has put this collection together from a wide range of home recordings, RTE archives and other sources.  Running at over 100 minutes across two CDs, it is arranged thematically into a CD of mainly solo flute, fiddle and whistle and a CD of duets, trios and a couple of larger ensembles.  Ranging in recording date from 1947 to 1974, the collection gives a taste of Eddie's flute and fiddle style at the top of his abilities.  Moloney died relatively young in 1980.

CD 1 is given over to solo playing and the first track was recorded in 1947 by Seamus Ennis.  Moloney plays a tune he calls The Ballinakill that sounds like a two part version of the well known Foxhunters reel.  The CD continues with a duet with Joe O'Leary on fiddle, then we get a generous sample of tunes recorded by Mick O'Connor in the early 1960s.  Moloney's tone on these recordings is strong with a lot of driving rhythm while the playing is at a steady, easy going pace.  He plays fairly long phrases on a single breath which he punctuates with occasional tonguing for emphasis, almost mimicking the piper's tight fingering as he sets up the basic tempo of each tune.  Most of his ornamentation is based on rolls and the odd triplet.  There's a bit more tonguing on the tin whistle, but his fingering is pretty consistent across both instruments. Most of these tunes are only played through twice so there's little room for much melodic variation and for the most part the variation is very subtle and you need to listen more than once to see the clever shifts in the tune's shape as each part is repeated.  The ability to make simple tunes endlessly interesting is the mark of a great musician and Moloney almost unconsciously creates something new at every repeat.  He puts some wild and probably well rehearsed variations into his setting of Miss McLeod's reel just to show that subtlety is not the only order of the day.

The second CD kicks off with flute and an un-named dancer to show how well Moloney's music fits for dancing.  This is followed by a 1955 recording of the Ballinakill Ceili Band featuring Eddie and his father playing flutes.  Eddie had a very long musical association with Aggie Whyte, another Ballinakill musician; in fact they won an Oireachtas competition in 1937.  This CD has six tracks of Eddie and Aggie from the early '50s.  The recording quality of these is not as good as some of the tracks but the playing is of such a high standard they fully merit inclusion.  Later on the CD there are three tracks featuring Galway fiddle and composer Tommy Coen which are simply sublime.  The shared understanding and drive puts these tracks into a different class, the music is outstanding.

In between these there are selection with various ceili bands and ensembles rounding off with Eddie's solo setting of the Sally Gardens reel from the 1960s tape.  Some of the tracks feature Eddie with one or two accompanists, but the backing never obscures the lead musician.

About 12 of the tunes across both CDs are credited as composed by Tommy Whelan, mostly these are well known although not universal, and Eddie has some interesting twists in his settings which are probably closer to the original playing than many session settings that are in circulation.

The reproduction on most of the tracks is of a very high quality, as they come from original, or at worst second generation, copies and the arrangement across the two CDs is very well thought out.

There is a 16 page booklet with the CDs where Sean Moloney sets out a brief family and musical history of Eddie's life and times.  Frankie Gavin and Mick O'Connor both wrote little memoires in appreciation of Eddie.  The sources and approximate dates of the tunes are also provided.  There are a few typos in the notes that should have been cleared up before publication and some transposition of tune names and numbering have slipped through, especially on the first CD where the hornpipe selections are mis-matched and the reel and jig at track 22 and 23 are in the other order on the CD to the notes.  That aside, the sleeve notes are full of interesting insights into the traditional music scene around Galway city where Moloney spent all of his married life.

This collection is a long overdue memorial tribute to a great flute player.  We can't recommend it highly enough.  It's available, as usual, from Custy's shop http://www.custysmusic.com