Milestone at the Garden

This CD fairly rocks along like a wild thing with music of the highest calibre.  This is hardly surprising, given the roster of star performers.  Practically all of the outstanding recorded fiddle players - both at home and in the U.S. - are represented.  A few omissions spring to mind - John Fahey, Patrick Gaffney, James Swift - but we already get the maximum playing time, so maybe eventually a second volume will appear.

Stylistically it is County Sligo that dominates, a fair enough proportion in relation to the original output.  Several of the performers, though, wield their fiddles with an Irish Midlands flute player's mentality, scarcely 'pausing for breath' once.  Paddy Cronin is one, while Denis Murphy is another. 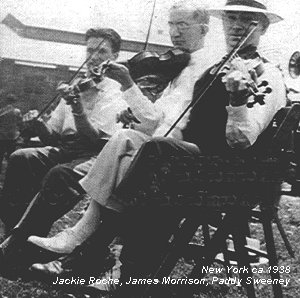 Solo fiddle with piano accompaniment is the norm here, but the common twin fiddle combination is also represented, including the prolific Killoran and Sweeney.  Another such duo - Louis E. Quinn and James 'Lad' O'Beirne - strike an almost eerie pose with their 1933 rendition of the hornpipe Fly By Night, on the three tune set released as High Level.  They reprise the remaining two, High Level and The Newcastle, on a private acetate made nearly two decades later, although not quite so together, and rather let down by the anonymous floundering pianist.

There are, though, more than fiddles carrying the melody at times.  Barney Conlon melds perfectly with flautist John McKenna, although the latter is rather further back in the mix than one might like.  Similarly, Frank Quinn is complemented by a fine anonymous accordion player.

'K Scanlon', for so long time the greatest mystery of pre-war Irish discography, rears his bow once again.  As the authors note, he plays firmly in a recognisable Sligo style, and has indeed been identified on occasion as Michael Coleman.  Reinforcing that notion is the fact that one of Coleman's influences back home was one Kipeen Scanlon.  But it's unlikely to have been him in 1929, recording pseudonymously at the height of his career.  One friend is reminded of Coleman's cohort Packie Dolan, a suggestion which is as good as any.  Whoever he may be, his playing is certainly fiery.

On the knotty problem of rhythmic accompaniment, John Howard and the great Frank Quinn (see the companion Flanagan Brothers review for further exposition on this terrific artist) prove that it wasn't at all necessary.  That the recording companies foisted an, often unsuitable, accompanist is a subject for deep regret.  Julia Grey, for example, is merely plodding behind Frank O'Higgins' otherwise fine offering.  That said, just once in while a pianist hits it just about right.  The late Eleanor Kane (not represented here) was spot on during her teenage years, on the 1935 sessions with Pat Roche's Tara Harp and Shamrock Band.  And Thomas McSharry, heard here with Paddy Cronin, is uplifting and rock solid, and even his histrionic pauses aren't as annoying as they might have been.

I have few enough complaints regarding both musical and textual content of CD and booklet, and nothing but praise for Jack Towers' usual exemplary sound restoration.  Two niggles remain, however, one of them major.  Despite discussion in the notes of "highlands and strathspeys ... polkas and slides" the compilers omit even a single example of these forms, leaving reels and jigs to predominate to almost a distracting extent.  Only six of the twenty five tracks are in other rhythms, and three of those - hornpipe selections by Quinn and O'Beirne - are grouped together.

Rather more serious a quibble is Rounder's ongoing blatant disregard for including discographical information.  The situation is akin to publishing an academic work and, after all, many CD booklets fall directly into that category.  But giving inadequate bibliographical details in that context is rightly considered poor scholarship, and that tarry brush is just as applicable here.  It's both annoying and frustrating, and Rounder need desperately to get their act together.

Notes describing the very first track proudly proclaim that it is 'reissued here for the first time' and right they are.  But its scarcity pales in comparison to quite a number of further items on offer.  That original Morrison disc can still be bought.  Beyond price are the never issued acetates of Sligo players Paddy Killoran and Kathleen Harrington.  The CD is worth the price for these tracks alone, and the compilers have, by and large, chosen uncommon items which are unavailable on any but the original 78s.  The whole is a rich and fecund cornucopia of Irish fiddle styles.