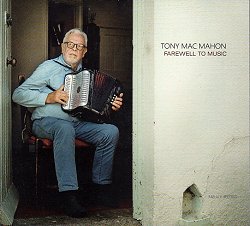 For the last 50 years odd, Tony Mac Mahon has been an enigmatic presence in the world of traditional Irish music.  He is a self-confessed anti-accordion campaigner - once saying that they should all be dumped in some deep bog with just one retained in order to remind people of the pestilence that was, and to dissuade, by practical demonstration, anyone tempted to commit future musical sin.  Influenced in his youth by Joe Cooley and later learning from Sonny Brogan and Bill Harte in Dublin in the late 1950s, he became a master of the pull/push style associated with the C#/D accordion.  This is a style with an inherently greater punch and rhythm that the alternative B/C style being developed in the 50s by Paddy O'Brien, Joe Burke or Finbar Dwyer.  He came to be highly regarded as a stylist by other musicians.  Yet for all that he seemed happier as a radio and TV producer bringing other musicians to public attention, through The Long Note on radio and The Pure Drop and other programmes on RTE TV.  He recorded one LP for Gael Linn in 1972, then released a compilation of other projects and recordings in 2001.  In between, two live concerts he'd played with concertina player Noel Hill and assorted set dancers were released on CD.  These highly atmospheric recordings are classic examples of Irish music played for dancing.  The CD Live in Spiddal, a recording from 2005, was released a couple of years ago, and reviewed in MT in December 2014.

When tremors in his hands foreshadowed the onset of Parkinson's disease, Coaimhin O'Raghallaigh persuaded Mac Mahon to record his repertoire of slow airs over a three day period in 2009 in a local church.  This CD of the edited highlights of that session can be seen as a companion to the 2005 concert.  As the title suggests, this is Tony's musical farewell as he no longer feels able to put the heart and soul into his playing as he did in his prime.  Anybody who has seen him play live or has watched the few available Youtube clips, will know he really did pour a lot into his playing.  As Seamus Ennis said on the first LP, Mac Mahon "seems to shed even his very presence, as though his music has taken him into another dimension."  In his typically idiosyncratic way, it's obviously all in or not at all for Tony Mac Mahon.

In old harping traditions, music is divided into moods, geantrai is light hearted music for entertainment and dancing and Mac Mahon has given us plenty of that in his time.  Goltrai is music for lamenting and crying.  This CD is definitely his musical guide to Goltrai.  There are no sleeve notes to speak of, the music stands stark and self-contained.  Sharing a flat in New York with Seamus Ennis started MacMahon on the road to playing airs on the accordion and he was probably the first to attempt some of these tunes; certainly the first to make a real study of the art.

The CD takes its title from Carolan's Farewell to Music, reputed to have been written by the celebrated harpist at the end of his life.  It is a poignant air searching for a resolution that never comes.  Played forcibly with plenty of bass chords, but slowly, this is very deep and sets the mood for the rest of the CD.  The de-tuned nature of the sound of the old Paolo Soprani, an instrument almost the same age as Mac Mahon, and the natural echo of the church places the music in a time far removed from the current instant access style of Irish music so often found on CDs.

The CD continues in similar vein through the epic Anach Cuain, set originally to a poem by Raifteiri an file, via Pilip Seimh O'Fathaigh (Gentle Philip Fahy, an aisling air from Ennis himself), to end with An Buachaillin Ban, the Fair Haired Boy, a version of the Dear Irish Boy from that 1972 LP.  It is powerful and emotional playing and the CD will probably stay in our collection as something to dip into for a small, concentrated dose rather than something to play all the way through. As Caoimhin O'Raghallaigh says in his dedication, if you wish for respite or light relief there is other music.  One does find after a while that the music is so slow and contemplative that you can lose the thread of the tune in the flow of notes, especially with some of the less familiar airs.

Despite Mac Mahon's own view that the accordion is not suited to Irish music, this is the way he has chosen to express his musical personality and he has created some of the most affecting music of the last 50 years on the box.  While this recording may be something the casual listener may bypass, it remains a significant part Tony Mac Mahon's musical character and, as such, deserves the attention of any enthusiast of Irish music.  It's unlikely we'll hear anybody quite like him again.