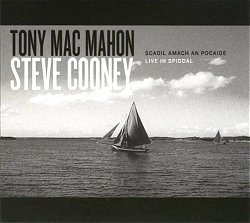 This is just wonderful!  No ifs or buts - I can (and have) listened it for hours at a time.

Raelach Records is a name new to me, and I'm surprised that this is their fifth CD - as they've not sent me the other four - but maybe they thought this would be the one I'd like.  They were right!

Steve Cooney's is a name I've often encountered as accompanying guitarist, and I've found his playing to be interesting - if not particularly subtle.  One could argue this this is the case here too - but it doesn't matter.  It works very well with the box on this music.

Tony Mac Mahon, on the other hand, is not someone whose playing I've heard much of - mainly, I think, because he's not recorded very much.  Too traditional in style for commercially minded record companies, I wonder?  There are two reviews of his earlier releases amongst these pages - one, by Ken Ricketts & Marya Parker, was full of praise for his playing.  The other, by me, was of a pair of reissues of old Gael Linn LPs, and his playing on one of them was the only thing I really found to like.

So, if I'm coming late to Tony's playing, it really is like an early Christmas present!  The sad news (to be found in the Press Release, is that he's recently been diagnosed with Parkinson's Disease, which is begining to affect his playing.  So this CD (recorded a few years ago at a concert in Co Galway) and another (already in the can) of slow airs, are likely to be his final releases.

But his illness certainly wasn't affecting his playing when this recording was made.  It's some of the most wonderful music I've had the pleasure of listening to for years.  Let's start at the beginning - Here's a bit of C·nla from track 1.  Who could ask for a better start?

Then we have track 3, The Rolling Wave.  I've often told musical beginners that English jigs should be played 'lumpy' - and then have to show them what I mean.  Astonishing to find a perfect example of the beast on a record by an Irish box player!  And, as you can hear, he's an Irish box player who plays his basses - generally as a matter of course, rather than to produce an effect.  And - if this isn't going a bit too far - he plays them very much as I do, emphasising the rhythm, rather than doing that old 'boom-ching' bass-chord thing far too many English players picked up from tutor books, and never got round to replacing!

I'd happily give you a bit of almost every track, but that would be rather silly - let's finish up with a set-dance, and its first tune is what I'd call a hornpipe, The Garden of Daisies (GairdĒn na N¾inĒnĒ) on track 8.  I hope you're beginning to see what I love about Tony Mac Mahon's playing.  What a shame that the CD's only 43 minutes duration.