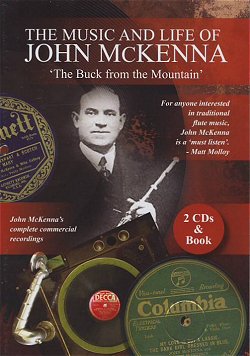 Flute player John McKenna was born in January 1880 in the townland of Tents, Tarmon in North County Leitrim.  He emigrated to America in 1904, returning briefly in 1909 to marry Mary Keaveny before settling down with her in New York.  In a 15 year period from 1922, McKenna recorded 44 sides of tunes as solo and duets with flute, fiddle or banjo.  18 tracks were issued on a Viva Voce Cassette in the mid 1980s and the sleeve notes from that cassette are still available on the MT website as Article MT114 and these provide a helpful historical context to this review.

Towards the end of 2014, all 44 sides were collected and published with a 100 page booklet by the John McKenna Society.  The booklet follows the pattern set by collections on Coleman, Mullaly and Conlon in giving a well researched life story and more academic studies of the musician's style and repertoire as well as detailed listings of recording dates, labels, numbers and personnel.  The analysis of McKenna's fluting style is backed up by a couple of detailed transcriptions that show in the finest detail how the master flute player weaved his magic around the notes.  The book is generously illustrated with commercial and family photos.

What you appreciate by actually listening to the CDs, though, is what Patsy Hanly, himself one of the greats of Connacht flute playing, describes as the excitement and exuberance in the music.  "This was not of the finely honed type of music where the technicality was the main goal, but a style which evolved naturally among the many flute and fiddle players of his own locality and echoed among his own Whinny Hills."

The music is presented across the two CDs in a pleasing blend of early and late sessions, mixing duets with solos, reels and jigs as well as the one song and one side including lilting that McKenna recorded.

CD 1 starts with one of the great duets with James Morrison that the pair recorded in late 1928 and early 1929.  The Tailor's Thimble / The Red Haired Lass are still played as a standard pairing in Irish sessions today.  The Tailor's Thimble is a tune that was undocumented before this recording so must be from McKenna's home place.  The excitement generated by the attack of both players, the closeness of their setting and the punchy pace makes this the classic it remains to this day.  Above all else, this is music for dancing and dancing underpins every track on both CDs.

Up to 1925, recording techniques were entirely acoustic and any sense of mixing the sound was done simply by positioning the players around the recording horn and the quality of the early sides is always limited.  Billed as Fireman McKenna on his first recording session with fiddler Barney Conlon, he plays tin whistle, and on solo recordings from 1922 to 25, McKenna used a flute in F to try to project a better sound.  Some of these early records are extremely rare and one or two tracks suffer from a high level of surface noise.  McKenna recorded with Columbia Records in 1925 when Columbia had adopted electronic recording techniques using microphones and McKenna played a concert pitch flute on all his subsequent 78s.

McKenna had a very long personal and musical friendship with banjo and fiddle player Michael Gaffney both at his home and at dances, weddings and such and their music was very close and well rehearsed.  McKenna recorded eight selections with Gaffney in 1925 and their duet playing was always exemplary.  The January 1925 session includes the two tracks with vocals and lilting.  The November sides are the first recorded through electronic microphone and the quality is noticeably brighter than the earlier 78s.

John McKenna's recording career was interrupted in 1926 when his wife died and he took responsibility for raising his six children.  He didn't record again until 1928 when he recorded four sides in March for Columbia.  In September that year he recorded the first 4 sides with fiddle maestro James Morrison.  These sessions included the polkas My Love is but a Lassie / The Dark Girl Dressed in Blue which features soloing from flute and fiddle as well as well rehearsed duet playing.

Early in 1929 the pair recorded three more sides.  This time Morrison plays tin whistle on two of the tracks, the other being the wonderful pairing The Tailor's Thimble / The Red Haired Lass.  McKenna's contract with Columbia was concluded in 1930 with two solo sides.

In 1934, McKenna was reunited with banjo player Michael Gaffney.  These 1934 duets on the Decca label include some of the most commonly known and well played pairing from McKenna's repertoire and Colonel Rodgers Favourite / The Happy Days of Youth are now probably better known simply as McKenna's reels.

The Great Depression put paid to many recording careers and McKenna made his last half dozen recordings in May 1937 with flute player Eddie Meehan and as part of Meehan's Rosaleen Quartet with fiddler Larry Redican.  Redican (1908-1975) was a recent immigrant, over 20 years younger than McKenna and is now best remembered as a composer of fiddle tunes.

McKenna's flute style was obviously well established at the time of his first recording and remained strong throughout his recording career.  The 1930 recording on The Kid on the Mountain demonstrates a fantastic pulsed rhythm that exemplified McKenna's approach to dance music.  To get a real flute player's take on the rhythm, ornamentation and other technical aspects of McKenna's music, you can do no better than look at Harry Bradley's Errant Elbow blog - http://errantelbows.podbean.com - where he has recently been dissecting and explaining in words and flute playing how McKenna put down such a significant marker in the history of recorded Irish music.

This CD is a great product of international team work, including the flute player's great granddaughter and a host of highly respected musicians and musicologists.  Anybody with an interest in the history and development of Irish traditional music should own a copy.  It's available from the Society's website - http://www.johnmckenna.ie/Release1 - or Custy's on-line shop - http://www.custysmusic.com