The Boys of the Town

Reels: Oot Be Est Da Vong / The Maids of Mount Cisco / Clancy's Fancy;  Jigs: Hardimon's / Maid in the Meadow / Scatter the Mud;  Reels: The Milky Way / Larry's Favourite / The Caucus;  Slow Air: Cape Clear;  Reels: The Full Set / Flagstone of Memories;  Marches: The Centenary / The Camowen;  Reels: Black Pat's / The Thrush in the Storm / Packie Duignan's;  Redowa / Reel: The Barnacle / The New Found Out;  Hornpipes: The Liverpool / McMahon's;  Jigs: The Leprechaun / Pat McKenna's;  Reels: Living in Decency / The Fair Wind / The Limerick Lasses;  Slow Air: Taimse im chodhladh;  Jigs: The Second Victory / Only for Barney / The Cock and the Hen;  Reels: The Pigeon on the Gate / The Green Mountain / The Galway Rambler. 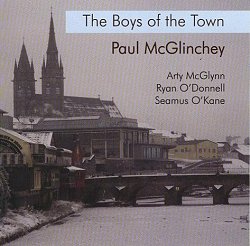 This CD is Paul McGlinchy's second recording.  The title is taken from a well known tune, and it's been chosen as three of the four musicians on the record are natives of the town of Omagh, Co Tyrone.  The odd man out is the bodhran player.  Paul's previous release featured a couple of fiddle players, this one is entirely a showcase for his flute playing.  The record presents a selection of tunes on solo flute with accompaniment from Arty McGlynn on guitar, Ryan O'Donnell on bouzouki and Seamus O'Kane on bodhran.  The tunes are played on four different flutes, in D, E flat and B flat.

The first impression is of a flowery style, not typical Northern flute playing.  The opening track sets the scene with a tune taken from a Solas record paired with a couple of older more familiar reels.  The pace is brisk and there is quite a heavy emphasis on rolls and fingered ornamentation, cuts, double cuts and triplets that make the music seem faster than it really is.  The sense of urgency is emphasised by the bouzouki accompaniment and there is a feeling that the pace picks up slightly with each change in tune.  The Full Set/Flagstones of Memories pairing is taken at a more steady pace and it's much easier to appreciate the range of subtle melodic variations and ornamentation that McGlinchy is capable of introducing when he gives the tune room to breathe.

Only the two slow airs and a pair of jigs played on the B flat flute are unaccompanied.  All the other tracks have either the guitar or bouzouki with the bodhran on most.  Despite the undeniable quality of the accompanists, their constant presence produces a sameness about each track that makes it hard to pick out any highlights.  On the tracks where the pace of the group playing picks up, it's easy to imagine that the musicians were having a great time pushing themselves and each other to their limits.  This sort of playing is great in a live environment but it doesn't always translate onto CD and a couple of tracks just feel too fast for the listener to enjoy.  The music feels over-accompanied and you also find yourself hoping for a track of tin whistle playing or another melody player to join in to break up the pattern of reels then jigs then an air, before the cycle is repeated.

The CD is well produced, the flute is obviously the lead instrument but the accompanists are nicely balanced in the mix, with the bodhran fairly low in the mix.  The sleeve notes are a brief reminder of where the tunes were learnt.  Paul McGlinchy's playing does not have the force of personality to sustain 45 minutes of flute playing to have appeal beyond the market of Irish trad and flute enthusiasts, but there's no denying that he is is a solid flute player with great technique.  The CD is available through Custy's or from Paul's own website: www.flutemcglinchey.com