Happy to Meet, Sorry to Part 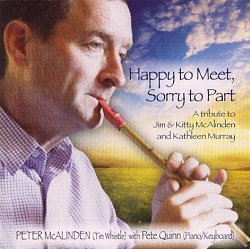 London born Peter McAlinden is one of five children of Irish immigrants.  His early interest in Irish traditional music was encouraged by a neighbour Kathleen Murray who taught Peter his first tunes and introduced him to many of the musicians associated with the heyday of Irish music in London, such as Danny Meehan, Bobby Casey, John and Julia Clifford and Raymond Roland.  Peter drifted away from the music in the early 1990s and has only recently returned to playing.  On this CD he plays a selection of old and new tunes on the tin whistle accompanied by Pete Quinn on piano.

From the opening bars of the Concert reel it's obvious that Peter McAlinden is a confident and tasteful whistle player.  The pace is steady, the rolls are crisp and there are nice subtle melodic variations.  Peter also shows he has studied the classic recordings and adds his acknowledgement of the legacy of the greats in his tasty interpretation of The Boys of the Lough and The Woman of the House, both following Coleman's variations while putting his own slant on the tunes.  He does the same later with The Salamanca, although the treatment of Dr Gilbert in the same set somehow fails to raise the excitement of the Coleman original.  Maybe too many rolls smooth out the spikiness of the reel or it just doesn't translate well from fiddle to whistle.

There are three slow airs on the record.  The stand out track is a lovely version of Anach Cuan learned from Seamus Tansey.  There's a lot of reverb of this track but it doesn't distract too much.  Peter follows the air with a Sligo jig, The Killavil but then makes an awkward change into a reel.  This reviewer isn't keen on mixing time signatures, a lesson learnt long ago from Julia Clifford, and while it's a nice effect to follow an air with a dance tune, adding a reel seems a bit contrived.  The last track, played in tribute to Peter's mother gives the Star of the County Down a similar treatment as hornpipe, jig, and reel follow the original air.  Peter's playing of the Coolin, while faithful to the ancient setting just sounds a bit too syrupy for today's audience.

Generally, Peter plays an interesting mix of jigs and reels through the record with one set of hornpipes and one of slip jigs.  The Sligo roots of his teacher come through in the selections but there's enough borrowings from Clare and Galway to show a wide repertoire and eclectic taste.  The jig called Tom McElvogue's and credited as Tom's composition is very popular with the younger set of musicians as it offers scope for a lot of syncopation.  Peter's version is clearly the regular setting and dates back to his days with St Colmcille's Ceili Band.  The young bucks should take note!

The whistle does not always sound in tune with itself and it's the same Generation whistle played throughout.  An hour of whistle playing could get a bit tedious but here Pete Quinn's piano accompaniment successfully creates varied moods and feelings on each track, with the odd tune played one time through before he comes in.

The accompanying booklet has a bit a family history and background and short notes about each selection of tunes.  It's not unusual for musicians to be stuck for a name for many of the tunes they play but it's a pity Peter didn't have anybody to check tune titles with, as many of the selections are named after Peter's source but some have more familiar names.  Josie McDermott's is usually known as Devanny's Goat and Conway's is Old Joe's jig.  This record would be a great source for somebody learning Irish music to get some good solid settings and having the right names is helpful.

Overall this is a well produced record that deserves a wide audience.  Currently available through Copperplate, it's a worthy tribute to Peter's parents and his mentor.