Social, commercial and academic pressures serve to distract performers from their central role - to communicate stories or emotions, or to play for dancing.  In Italy there's no such thing as a folk club, or even a concert organised by an enthusiastic individual - every gig is Municipal.  Thus academic qualification is seen as mandatory ... hence all those thick CD booklets with pages of bibliography and research.

Nothing wrong with that in principle but, given time, the result is that 'folk' music inevitably absorbs rather too much of the conservatoire, and performers strive for technical excellence - usually at the cost of their souls. 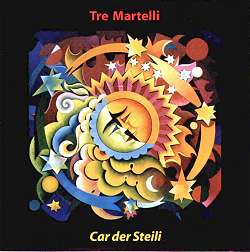 So here's a new Felmay (aka Robi Droli) CD where the inevitable has taken its toll to an extent - it's not quite what it might have been 20 years ago.

I was very pleased to hear of the forthcoming release of this new Tre Martelli record - their last, Omi e Piaz (People and the Land), was back in 1995 (thus never reviewed in these pages) - and I've long been a fan, and friend, of the band.  But even these bastions of Piemontese traditional style seem to have moved quite a way from how they sounded when I first heard them back in 1982.  Of course they should sound different, but they ought to feel the same - and they don't ... not quite.

Time has made better musicians of them all and this is particularly noticeable in leader Enzo Conti's organetto playing which, on this evidence, is as good as any you'll hear elsewhere - and a lot better than many modern technique-freaks.  Andrea Sibilio's fiddling is now almost too good for the simple material they used to play - and this may have something to do with the new direction taken on this CD.

Their booklet notes tell us that the project focuses on the turn-of-the-century period around 1900, when "there was a complex interchange taking place in Piemont between music from the oral tradition and numerous musicians from a classical background who, at the same time, nurtured a passion for the folk music of their own land.  Such an osmosis is evident both in the songs of the period and in the dances that for a long time moved from the popular festivals [traditional events] to the balls of the middle classes and the minor gentry, mixing echoes of the older styles with innovative suggestions from the classical field."  All this rather strikes a chord, doesn't it?

Thus we find a good deal of material taken from manuscript collections and the like of the period, rather than the traditional sources Tre Martelli have mostly relied on in the past.  Johnny Adams and the many other Village Music Project enthusiasts will tell you that there's nothing wrong with this.  When it produces vibrant, exciting music I entirely agree with them ... my only concern is that it doesn't always seem to do so - that it seems to me less likely to do so than going to a practising traditional source,

even through the medium of recordings.  Here, I feel that much of this material is too 'drawing room' for my rough taste! (sound clip - Monferrina di Masserano)

The arrangements are imaginative and appropriate,

the whole programme is varied and well balanced and there are a couple of good new songs composed by Andrea Sibilio working with the poems of Giovanni Rapetti (sound clip - Er Car di Translňc), as was also the case on their last record - though I thoroughly dislike the piano on the second one.  But, throughout, there is the underlying feeling that the rough vigour of their earlier work has been sacrificed for the polish of the final product.

This may in part be due to the fact that the band has not been playing together very much recently; Ciacio e Boioli, the party animal, has been off in foreign parts doing theatre work and moonlighting in other bands (see our Tsarriye review), and singer Bernadette da Dalt has withdrawn her services permanently.  When Enzo Conti last wrote to me he seemed rather depressed at the way things were going and the small amount of playing he was then able to do.

Still, it has given him time to compose another really nice little mazurka in honour of his daughter Eleonora (sound clip - Mazuca per Nene).

Some things remain as good as ever, of course -

Ciacio Marchelli's surefooted yet emotional baritone still charms the birds from the trees, and the way the ensemble work skips along in the cracks between 4/4 and 3/4 time on Rinaldo Doro's Pŕn e Pňm is just delightful (sound clip).

I'm very pleased to have this new CD after a gap of five years since Omi e Piaz and I can't imagine too many of their UK fans being in any way disappointed by this release.