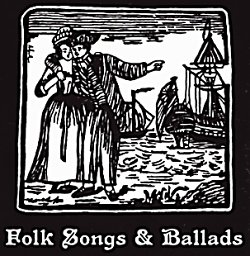 OK - not what you'd expect to find reviewed here, but look at the tracklist!  Also, Mark T is a 'community musician' - so that means he's in a way (in some way!) closer to a real traditional performer than are many semi-pro revivalists.  And, just to perplex you even further, I rather like his guitar playing!  But this is mainly a CD of Folk Songs & Ballads, as is says on the tin - so, how does it measure up?

Well - were he a classical violinist, say, one would expect that, as well as learning his repertoire from printed music, and aside from any eclectic musical tastes he might have, one might think that he had listened to some of the great classical violinists - on record, if not in the flesh.  So I find it inexplicable that in his 'About the Songs' (on his website, not on the minimalist CD slip-case) he doesn't mention a single traditional singer he has learned any of these songs from.

What he does say on the slip-case is 'I have loved folk music all my life and the folk music of England and the Celtic Nations have pride of place in my musical life.' and 'I have sung some of these songs since my mid-teens ...'  That being the case, I would have thought that he might have realised that well over half of the songs on this CD are actually quite difficult to sing well and, possibly, that having a listen to people who know how to do them justice might have been a good idea!  But he hasn't.

In truth, I'm not sure that it would have done him any good, since several of his sources do know how to do them justice - but Mark hasn't understood what they're up to at all.  Interestingly, since most of his named sources are revivalists, he doesn't even sound like a revivalist!  In a way, this might be considered a recommendation - he sings in his own way, unaffected by outside influences ... a true voice, and lacking all self-awareness.  However, I feel that in the present circumstances this isn't a recommendation.

A bit of self-awareness might have allowed him to hear that he's badly out of tune in several places, or that splitting up words to fit the melody doesn't necessarily help you communicate the story - which is the principal point of these ballads.  The start of track 1 will clarify what I mean (sound clip).

If he hasn't learned how to sing this stuff, you might think that all his days 'in the town or county libraries pouring[sic] over musty old books of Folksongs' would have given him some accurate information about the songs - but again he has failed.  In the notes to Young Girl Cut Down In Her Prime, he writes 'It was called The Unfortunate Rake in Ireland but many English singers knew it as St James Infirmary.  I got the words to this song from The Penguine [sic] Book of English Folk Songs.'  As a matter of fact, amongst Roud's 335 entries, not one Irish example is titled The Unfortunate Rake, nor are there any St James Infirmarys noted from England.  Indeed, neither of these titles appear in Roud exactly as quoted.

Ah well, it was worth a try!  As has been noted many times before, you need more than love and enthusiasm to do these songs justice; some proper hard work is called for.