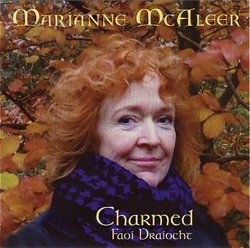 For years I would come across Marianne at events such as John Waltham's Dorset Singing Weekend or the Inishowen Traditional Singing Weekend where I was always struck by her subtle, delicate yet intense singing, her command of decoration and nuances of phrasing, her obvious love of the songs and enjoyment of singing.  What I didn't know was that she was born into the vibrant London-Irish community of Kilburn, learning her earliest songs from her Cavan father Jim McPhillips, and had been competing in various Comhaltas Ceoltóirí Éireann Fleadhs, winning an impressive array of awards.  'Marianne is a multi award winner at both the All Britain and All Ireland Fleadh Cheoil. She is the current champion on this side of the water, in both Lilting and Singing in Irish, and is likely to lilt if the need for a dance arises before the fiddler has reached the crossroads!'

Now she has recorded this most welcome (second) CD, Charmed (Faoí Draíocht), a well-rounded collection which ranges from the grand Irish songs of courtship, emigration and lamentation, 'songs of love and of Napoleon', to lighter and lilting pieces plus some recently composed songs.

Particularly impressive are The Kilnamartyra Exile, The Banks of Sullane (Roud 9718) and that dark dramatic song The Wounded Hussar (Roud 2699), since Marianne has the vocal range and control to do justice to both the high and low notes of these airs.

I have travelled along the Sullane in the West Cork Gaeltacht, winding low between high wooded slopes, and enjoyed the way the melody of The Banks of Sullane reflects the landscape.  Sung quite frequently in Ireland today, the original BBC audio recording dates back to Elizabeth Cronin in 1947.  Perfectly judged singing and pacing by Marianne on Sullane, a joy to listen to.  Marianne's notes on The Kilnamartyra Exile place the song in the same area; words by Johnny Browne but the air originally written for an Irish language song.  Marianne appreciates and brings out the beauty of these 'inventive, soul-searching lines of music'.

2  She gives detailed sources of the words and air of this track and of Táimse Im' Chodhladh (sung in Irish) and several others.  On other tracks I would have welcomed more information, especially on The Green Fields of America (Roud 2290) where she just credits 'the singing of John Faulkner'.  John recorded it with Dolores Keane in 1981

4 credited to his mother Brigid, and in his book The Stone Fiddle, 1979

6 he writes: 'a song my mother had but she had only two verses and the corrant or chorus.  I sat down last year and wrote 3 further verses starting with 'Farewell to the dances in homes now deserted'.'  Marianne's/Faulkner's version uses some of the Brigid Tunney verses but is to a different, much more upbeat air compared to Paddy's (which is splendidly melancholy) and includes some verses in praise of drink not to be found in his!  I traced Marianne's air to Len Graham's 1977 recording.

7  Len says it is from Paddy Maguire from Co Fermanagh, the words from various Northern Ireland singers.  Many are to be found in The Emigrant's Farewell

8 published in the Sam Henry Collection.  Here is the very positive final verse of The Green Fields of America:

There's gin in New Brunswick at a shilling a bottle
There's ale in Toronto at a penny a glass
There's wine in that fine town they call Montreal boys
And the divil be with us if we don't take a glass
So lift up your glasses gay lads and gay lasses
There's gold for the winning and lots of it too
Good luck to the hearts that have courage to wander
And misfortune to those who would chide us adieu.

See below for more from Len about how versions evolve.

As a singer I noted Marianne's skill in singing an acappella intro. perfectly in pitch to join the guitar backed Lady of Loughrea but also noticed an edit /slight change of pitch on another song which was rather jarring - I won't tell you which so hopefully you won't notice!  Her lilting is joyous and adds a lift to several tracks, notably on the concluding Humours of Ballyloughlin jig which follows Tumbling Thru the Hay (Roud 153) from Antrim's Joe Holmes.

Full marks by the way to Jeff Gillett for unobtrusive but enhancing guitar work on several tracks.  On Rolling Home Drunk (Roud 6333) the guitar is somewhat raucous - but I guess that's appropriate to the song.  In this version tune and refrain are from The Stewarts of Blair but most of the words are by John Tunney, who has contributed some strong verses from a woman's point of view:

Oh marriage it is a hard station
For they'll drink and they'll curse and they'll fight
And they'll wander around every pub in the town
Leave you worrying half of the night."

The CD is also a family affair: there's a lively burst of fiddle from son Finn McAleer on Fahy the Fiddler - written by Marianne herself to showcase her lilting skills.  Husband Pete McAleer wrote the words to The Cry of the Curlew in memory of his Tyrone childhood (winner of the Newly Composed Ballads competition at the 2003 All Ireland Fleadh Cheoil).  It's to the air of Ned of the Hill (Éamann A' Chnoic), which I have always found rather insipid, but I can't resist the appealing sound of an actual curlew on the track!

Another prize winning song is Michéal Marrinan's Island of Australia.  Written in 1988 about this more recent wave of emigration following the collapse of the Celtic Tiger, it's no longer the landlords to blame but the bankers and speculators.  'Island' seems an odd word to apply to such a large land mass, perhaps it's used to evoke Napoleon's exile on the Isle of Saint Helena, though the suitably melancholy air is closer to The Bogs of Shanahever.  Marianne's heartfelt singing bring out the pathos of the deserted rural areas and the irony of waving flags for dead Irish martyrs while the current generation of young people is again being driven to emigration.  Looking through some Musical Traditions reviews I see that it is not within the magazine's remit to comment on newly composed songs.  However, in Ireland many songs sung by traditional singers can be traced to specific writers/composers through the centuries and there is a flourishing continuity of songwriting in traditional style today.

This CD does a good job in capturing Marianne's sparkling personality, her joyful lilting, her thoughtful introductions and obvious love for her songs.  Highly recommended.

9. 'I started my visits to Keane's, Caherlistrane, Co Galway, in 1968 and I would have sang - The Green Fields of Amerikay, and of course when Topic brought my Wind & Water LP out in 1976 I gave a copy of the LP to the Keane Family.  Paddy Tunney was working in Galway in the 1970s and also was a regular visitor to the Keane's, so they would have been familiar with both versions.  I would say this was John Faulkner's introduction to the two versions.  The melody I sing is Paddy Maguire's from Co Fermanagh.'  Len Graham, email to Peta Webb, 27/04/2014.