English Folk Songs from the Hammond and Gardiner Manuscripts
Selected and edited by Frank Purslow.
Revised with new notes and commentaries by Malcolm Douglas and Steve Gardham

English Folk Songs from the Hammond and Gardiner Manuscripts
Originally selected and edited by Frank Purslow. Revised by Malcolm Douglas
and Steve Gardham with notes by Steve Gardham

For readers who are surprised to find two books, published eight years apart, reviewed here at the same time, I should, perhaps, offer a little explanation and background.  These are second editions of the first two volumes of a set of four books by Frank Purslow, originally published by the EFDSS in 1965 to 1974.  This was at a time when books of English folk songs containing both texts and tunes were a comparative rarity, and Frank's little gems were fallen upon with glee by thousands of enthusiastic singers new to the subject. 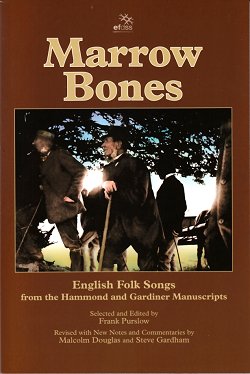 Marrow Bones:  The EFDSS decided to republish Marrow Bones in 2007, yet failed to send a review copy to MT - even then possibly the only magazine whose readers showed much interest in English folk songs.  Last year, the South Riding Folk Network decided to republish the remaining three books of the set, starting, obviously, with The Wanton Seed.  They didn't send us a review copy either but, as soon as I heard about it a couple of weeks ago, I asked for and got one.  You may wonder why the EFDSS didn't republish the other three books, particularly in the light of information in the 2007 Introduction to the New Edition: 'The second volume, The Wanton Seed, will follow in a year's time.'  A couple of my Editorial pieces this year may shed some light on my own, doubtless jaundiced, views of how things are with the Society these days.

Whatever - let's have a look at Marrow Bones.  The 1st edition price was five shillings (25p), whereas this new one costs £19.99.  To put that in perspective, 5/- would have bought you a gallon of petrol in 1965 when Marrow Bones was first published.  Today you'll pay around £5.25 for the same amount of petrol, so this new edition is around four times the price.  Today's book is 60% larger in area than the 1st edition, which makes the staff notation much easier to read.  It also has 228 pages, compared to the 120 of the original, though still the same 108 songs.  This might imply around 100 more pages of information about the songs, but the differing page and font sizes make any accurate judgements difficult.  There are certainly 64 pages of Song Notes, compared with 10 in the 1st edition.  There were 102 pages of songs in the 1st edition, compared to 116 in the 2nd.  So we have 108 pages of new information here, which accounts, in part at least, for the four-fold price increase.

Note: The price of Marrow Bones is now £10.00 on the EFDSS website.  I couldn't find it there when I was looking some moths ago, so I used the Amazon price.  So, today, this 2nd edition is only twice the price of the first, and represents very good value, in my opinion.

The 2nd Edition starts very well: a brief Preface by Frank Purslow; a Foreword by Vic Gammon; the aforementioned Introduction by Malcolm Douglas; mini-biographies of George Gardiner and the Hammond brothers by Frank Purslow; one on Frank Purslow by Derek Schofield; and an Acknowledgements page.  Every one of these is excellent, and Malcolm Douglas's Introduction to the New Edition is particularly worthy of praise.  His section on the Song Notes is most helpful, explaining how Frank Purslow's 'rough notes', which were unfinished and never intended for publication, got included in the final book due to a misunderstanding by Peter Kennedy who was liaising between the EFDSS and Chappell, the printers.  The Song Notes in this edition are newly written by Malcolm, and are exemplary.  One rather sad piece of information emerges; that a section entitled 'Biographies: the Singers' is intended to appear in volume 2 The Wanton Seed.  As we will see - it doesn't.

I'm certainly not going to go through each song and compare editions, but it does look as if many songs have more verses in this new edition: The Bold Fisherman now has 7 rather than the 4 originals; The Brisk Young Butcher 9 rather than 8; Don't Let Me Die an Old Maid 9 rather than 8.  Regarding the Song Notes, I'm not surprised that my comments re: The Bold Princess Royal in the review of The New Penguin Book of English Folk Songs have produced nothing about how a voyage described as being 'bound for Newfoundland' might end up in Cairo.  But we do get a whole page of new Notes, including a fascinating account of a 1798 naval encounter which may be the actual event upon which the song was based.  What is rather more surprising is that, with The Croppy Boy, we find no mention of the very unlikely march of 186 miles from Wexford to Dungannon (as in the song) rather than the more reasonable (and correct) one of 23 miles from Wexford to Duncannon, where the New Geneva torture facility was based (mentioned in other, older, versions of this song).

In general, this is an excellent song book, and the length and quality of the Song Notes go a good way towards making up for the quadrupling of its price compared with its 1st edition. 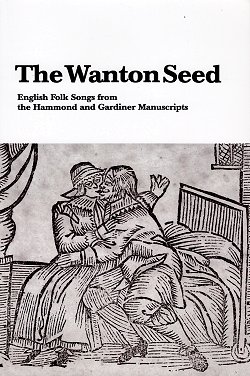 The Wanton Seed:  Here we encounter the problem(s) inherent in having one set of volumes published by two different organisations - exacerbated by having an eight year gap between the two publications.  As it happened, I got The Wanton Seed several days before recieving Marrow Bones, and so I was constantly making review notes of the 'where's the ...' and 'why aren't we told ...' sort.  As you'll have seen (above), many of these queries were resolved when the earlier volume turned up but, given the eight year gap, I'm surprised that no mention of the Preface, Foreword, Introduction, etc was made in this volume.  The expectation that all of today's readers would actually own Marrow Bones 2nd edition seems, to me, rather ill-founded - and a couple of sentences would have easily explained the situation.

The 1st edition price was nine shillings and six pence (just under 50p), whereas this new one costs £12.99.  The previously explained 'petrol price' computation reveals that this new edition is a little less than twice the price of its forerunner.  That sounds as if we get a far better deal here - but I'm no so sure.  It retains exactly the same 60% larger format, which makes the staff notation much easier to read.  It also has 202 pages, compared to the 152 of the original, though still the same 100 songs.  This might imply 50 more pages of information about the songs, but the differing page and font sizes again make any accurate judgements difficult.  Forty-three of these 50 pages account for the new Song Notes, which appear, at a quick glance, to be as good as those in Marrow Bones, if generally rather shorter, taking up just 43 pages rather than 64).  Indeed, all we get here beyond the songs themselves are a Titles index, a First Lines index, the Song Notes, Acknowledgements, a Preface, and the Introduction to the New Edition - all by Steve Gardham.  The Introduction concerns itself solely with explaining that almost all of the songs we consider to be 'folk songs' today were at some time derived from street literature.

These things seem to go in waves - the earliest collectors were only interested in texts, then came some only interested in tunes, Sharp and Co were only interested in what they considered to be the unconscious creations of 'the Folk', while later collectors like MacColl favoured contemporary compositions by working class activists.  When commercially produced recordings began appearing, their sleeve notes alternated between being concerned only with the performers or only with the 'material'.  Reg Hall's excellent notes to the Voice of the People series of CDs concentrated only on the performers - to the extent that Mike Yates and I felt the need to compile a full set of song notes to go with them.  I have tried, in the booklets accompanying our MT Records' CDs, to strike a happy balance between extremes, and am rather proud of the effect they seem to have had on the CD booklets of other record publishers since I started making CDs.  Here, I think that Steve Gardham's contentions about folk songs' debts to street literature may be a little exaggerated, since we have little provable data on the extent to which the broadside press used the oral tradition as the basis of its products.  The quality of one argument does not, necessarily, diminish its opposite.

Sad to say, the contention in Marrow Bones that 'a section entitled 'Biographies: the Singers' is intended to appear in volume 2 The Wanton Seed' is shown to have been unfounded - at least with this publisher.  I'd like to hope that it might appear in the relatively near future in the next/final volume from the South Riding Folk Network and Francis Boutle, which is rumoured to be a concatenation of The Constant Lovers and The Foggy Dew.

So, with the honourable exception of the first class song notes - which benefit from the 8 year gap, and now include far more in their 'other recorded examples' sections - we get very little new here compared with the 1st edition.  Steve Gardham's Introduction is good, but its contentions, I suspect, will not be news to most readers of the book.  The staff notation, as indicated in the Introduction to Marrow Bones, has been both corrected and improved - but not being a music reader, I can't comment on this aspect of the work, other than to say that I welcome it.

My only real criticism of both books - one that no one else shares, it seems - is that I would far rather find the Song Note immediately after the song to which it refers, rather than in a discrete section later in the book.  I realise that this is convention, but fail to see why convention needs to be followed when an obvious improvement could be enabled by breaking it.  Finally, I think it's a bit of a shame that, whilst keeping the volumes the same size, the approach to cover design is - as you can see - so very different.  This is not a criticism - just an observation!