Ceol a'Ghleanna / The Music of the Glen 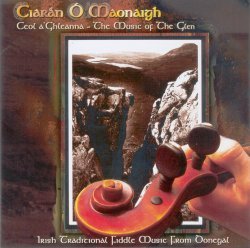 I have been most fortunate to witness the progression of one of Ireland's most prodigious fiddling talents, Ciarßn ė Maonaigh.

Voted TG4's young musician of the year in 2003, Ciarßn is a member of the illustrious musical family from Gweedore.  His grandfather is ProinsĒas ė Maonaigh (Francie Mooney) who taught many fiddlers music in the region while one of his aunts is Altan's Mairķad NĒ Mhaonaigh.  The clan, of course, is also linked closely to the Kennedy family from Belfast.  Mairķad was married to the late flute player Frankie Kennedy while Ciarßn's father, guitarist Gear¾id is espoused to one of Frankie's sisters, Anne.  Then there's Frankie's other sister, Ursula, who is wed to another fiddler, Dermot McLaughlin from Derry, who continues to be an important influence upon Ciarßn's musical development and features on two tracks on Ceol a'Ghleanna.  Another connecting thread is that ProinsĒas, Mairķad and Frankie were all once schoolteachers and Ciarßn has followed the line, though is currently taking a year's break from his training course in Dublin.

Though Ciarßn has always shone at H·daĒ Beag's sessions (often in duet with fellow fiddler Stephen Campbell) his abilities as a solo player have also gained increasing recognition and included a notable unaccompanied performance during the Donegal fiddlers' weekend in Glenties in October, 2002.

Those skills are highlighted by the sheer excellence and youthful exuberance of his playing on Ceol a'Ghleanna, although here he is accompanied by the guitarist and bouzouki player John Blake (my, that man does get around) on all but three of the album's fifteen tracks.  Those three exceptions include those two aforementioned duets with Dermot McLaughlin.  In many ways, the first of these, the reel Loughisle Castle, is the album's outstanding track and thoroughly evokes the spirit of John Doherty from whose repertoire the tune is drawn.  Doherty recorded the reel for both Peter Kennedy and Breandßn Breathnach, but his most widely known version appears on the eponymous Gael Linn 1978 LP (later reissued on CD as Taisce).

Part of that evocation derives from the employment of octave playing, or 'reversing' as it is known in Donegal.  In this case Dermot takes the lower octave, just as John Doherty's brother, Simon, was wont to do, while Ciarßn applies himself to the higher range.  Dermot also accompanies the first run through of the tune by simply using drones, often interjecting them later too, to reinforce the imitation of the sound of the pipes which was such a part of the Doherty brothers' own formative influences and subsequent playing.

Another duet and again a reel, The Pinch of Snuff, harks back to Sķamus Ennis's recording of John Doherty and the Teelin fiddler Frank Cassidy for Radio ╔ireann.  The effect is simply magical and it is almost possible to visualize a spark of electricity running from Ciarßn's fiddle to Dermot's.  The tune might serve simply as a demonstration of the pair's technical ability, but, as the music unfolds and becomes increasingly absorbing, there is evidence of a profound musical symbiosis.

Ciarßn's other unaccompanied track is the album's only slow air, Inion a' Bhaoghailligh which derives from a song popular in Gweedore and, as such, was part of the repertoire of both his aunt Mairķad and, further back in time, ┴ine NĒ Ghallcobhair.  As the playing of the uilleann piper Nķillidh Mulligan regularly demonstrates, a musician's rendering of a slow air is utterly enhanced by his or her understanding of the song tradition from which it derives and Ciarßn's restraint here fully achieves that sympathetic goal.

That track runs almost seamlessly into a tune associated with another Donegal fiddling maestro (from whom, incidentally, Neil Mulligan acquired his nickname via Sķamus Ennis), Nķillidh Boyle.  The tune is The Pigeon on the Gate which drifts into The Blackberry Blossom before culminating in a third reel, Over the Water to Bessie, learnt from Frankie Kennedy.

Indeed, Ceol a'Ghleanna could be seen as a personal homage to the whole gamut of Donegal fiddling greats.  Apart from the aforementioned Doherty tunes, there's also Miss Patterson's Slippers, The Cat That Kittled in Jamie's Wig, The Loughside Hornpipe, Slßn le Ceol, The Policeman's Holiday and Port Rann na Feirste.  The strathspey South of the Grampians derives from the playing of Tommy Peoples while other tunes come from James Byrne, Con Cassidy and the ė Beirn brothers from Kilcar.  Then, as one might expect, some come from his own family.  Apart from the previously referenced Kennedy tune, the only other non-Donegal element consists of a pair of jigs previously recorded by Matt Molloy.

All of the above named, both departed and still playing, would unquestionably recognize Ciarßn as a true heir to their tradition while he, in turn, is far too modest to deny their influence upon his music.

Some listeners, of course, might prefer a completely unaccompanied album and perhaps in the future Ciarßn may feel sufficient confidence to record one.  In the interim, there is no doubting that John Blake is a controlled and sensitive accompanist whose own skills are fully demonstrated by the subtlety of his playing on Con Cassidy's barndances.

That being said, there are a couple of tracks which seem lacklustre in contrast to others on Ceol a'Ghleanna.  The highlands Green Grow the Rushes and James Byrne's and the set of Mick Carr's barndances are all technically fulfilling, but there is a certain spark absent in Ciarßn's playing in comparison to the versions recorded by another of his teachers, James Byrne himself, and this is reinforced by the somewhat flimsily-toned accompaniment (plus, sadly, a few atonalities).

Despite these failings Ceol a'Ghleanna is an astonishingly effective debut and offers firm evidence of the enduring strengths of the Donegal fiddle tradition.

More information about Ciarßn ė Maonaigh can be found at www.comfiddle.com while the CD is directly available from Claddagh - www.claddaghrecords.com