Brother and sister, Andrew and Mary MacNamara should be well known; Mary's two CDs on Claddagh are rightly acknowledged as classics of Clare concertina playing.  Andrew has two tasty solo CDs to his name and two live recordings with his occasional band The Lahawns.  Live at Lena's is a particularly enjoyable record of a New Year's Eve get together in Feakle.  He was also the original box player with the band Skylark. 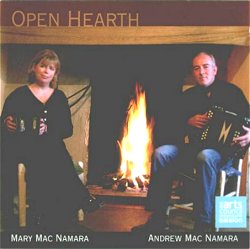 We got a glimpse of this music on Mary's last CD when Andrew joined for two duets, and it is a great delight to hear more selections for the pair.

In the hands of two accomplished musicians, there is nothing finer than music from County Clare.  It has an ease and comfort with a tremendous rhythm in it that speaks straight to the soul.  Mary and Andrew have a true link to the Clare tradition.  Born in Tulla, their parents were keen followers of the old players and introduced the youngsters to the playing of Joe Bane and Bill O'Malley whose music forms the heart of this CD.  There are familiar strains in the selections here but interesting twists alert the listener to a style and repertoire that is not widely documented.  There was not much of the O'Neill book in Clare in the '50s and '60s, they had plenty of tunes and local settings of their own.  Thanks to their Dad's purchase of a Bush reel-to-reel tape recorder, Mary and Andrew have hours of Bill and Joe's playing to draw on for old tunes almost forgotten.

The opening bars of Joe Bane's / The Green Gowned Lass set the mood for the record.  Box and concertina perfectly synchronised playing a few family favourites backed up by two tapping feet.  The rhythm is contagious, the pace solid and steady - it sounds slower than it really is.  Andrew puts a few left hand chords in to reinforce the beat, Mary drops the octave for variety and the whole record flows sweetly along, transporting the listener to the back room of a bar somewhere in East County Clare.  There is no accompaniment on the record but it is not missed on tunes like John Naughton's Jig where a long lonesome note signals the start of the second part.  The modal nature of tunes like this is more striking without accompaniment.

The Wheatstone concertina and Hohner box blend so closely, it's almost like one instrument.  Andrew in particular seems to restrain his usual exuberance to remain faithful to the way the old players had the tunes, but he loses none of the immediacy or excitement that characterises his playing.  Mary's playing is simply supreme.

More than half the selections are reels with three sets of jigs and a couple of hornpipes, which reflects the typical proportions you would get in a session.  One set of scottishes completes the CD.  Tune names are usually just a reference point so the number of tunes called Joe Bane's or Bill O'Malley's is no surprise, but the tunes on track 6 might be more familiar as a version of The Primrose Lass / Road to Rio than the listed Reel of Rio / Reel of Bogie.

Recorded in The Music Room, Tulla, the sound quality is excellent and Brendan Hearty deserves great credit for capturing it so faithfully.  Sleeve notes are brief but the notes by David Taylor introducing the musicians and a few background comments from Andrew and Mary are enough to put the music in its setting.

Clocking in at just under 31 minutes, this is a short record by modern CD standards but every second is pure joy.  Available from Claddagh, Custy's, and www.marymacnamara.com, this record already has our vote for CD of the year.