Macalla was a collection of 23 women all living in Dublin who came together for International Women's Day in 1984.  Often referred to at the time as the women's orchestra, the title of their first record Mn· na h…ireann (Women of Ireland) 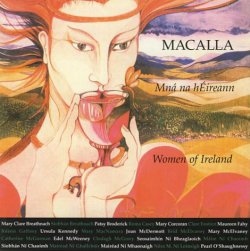 seems suitably appropriate as they represented so many counties across Ireland, along with Pearl O'Shaughnessey who orignally came from Scotland and Catherine McEvoy from Birmingham.  After a reunion concert in Ennis last year and an RT… retrospective, the release of their first record on CD is a welcome reminder for some, and will be a treat for those who missed out on the original vinyl.

The twelve brief tracks on the record are split equally between songs and dance tunes.  The songs are all in Irish with minimal accompaniment, mostly sung in unison by the ten or so vocalists.  Seosaimhin Ni Bheaglaioch, who was probably one of the few group members already noted as a solo performer takes the lead on the title track, which was a well known tune composed by Sean O'Riada for an old Irish poem.  The choice of songs provides ample opportunity to savour the rich mix of voices.  There are no grand slow airs here; the songs are delivered at a steady pace and recording the album in a church provided a very pleasing natural reverb.  With production and engineering by Nicky Ryan, this is a very well recorded album.

The tunes, like the players, have regional roots; highlands from Donegal, reels associated with Clare, Galway or Dublin, and hornpipes from Kerry.  All the tunes are played by the full ensemble of flutes and fiddles with Mary MacNamara's concertina the only free reed instrument.  Accompaniment comes from piano, harp and bodhr·n.  As with the singing, most of the tunes are played in unison.  The playing is tight and bouncy, reminiscent of a well rehearsed ceili band.  While there are no solos, the flutes and fiddles drop out and come back to provide enough variety in the sound to hold the listener's attention.  Above all though, the infectious rhythm and obvious enjoyment of the players comes across strongly on all the tracks.

After a second LP with a slightly changed line-up, the group went their separate ways.  Some became well known recording artists in their own right and a scan through the individual photos on the insert reveals a youthful Mairead ni Mhaonaigh, Mary MacNamara, Maire O'Keefe, Patsy Broderick and Maureen Fahy, to name but a few.  Catherine McEvoy appears under her married name of O'Gorman.

The result of a happy combination of circumstances, this is a record that never fails to lift the spirits and for sheer listening pleasure it still takes some beating.