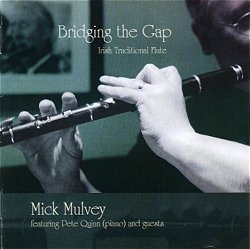 It was a real pleasure to get this CD to review - for several reasons ... one of which was that I'd recently been told that, because of some rather critical reviews in MT, I was unlikely to get any more Irish CDs sent to me.  Glad that's not proved to be the case!

The other - and far more important - reasons that I was pleased are that this is a really lovely CD,

and it has largely cured me of an unaccountable dislike of Irish flute playing.  Don't quite know where I picked this up from, or when, but it has seemed to be true for me ... until I heard this Mick Mulvey record.  Try out the opening track, The Mohill Reel, for size (sound clip).

I like it because the playing is wonderful, the music is rarely too fast (for my taste), and the style and most of the tunes come from Leitrim, where they seem to play in exactly the way I enjoy.

Added to which I find, most unusually, that several of Mick Mulvey's five own compositions are quite as good as the traditional ones that surround them.  See what you think of his reel, The Drumlion Loop (sound clip).  There's also a nice selection of tune types to enjoy: three sets of hornpipes; a set of barndances; and a slow air, to set against the jigs and reels.

The CD's title apparently stems from the fact that Mick was brought up in London, and learned his music in the Favourite, the White Heart, the William the Fourth, the Auld Triangle, but then stopped playing at the age of 18, for about 8 years - he doesn't quite know why.  When he started again he found a whole new generation of young players, both in London and in Leitrim, where he now lives, playing 'awesome music'.  'There was a big gap to bridge' he writes 'and I'm still at it!'

Having just re-read Geoff Wallis's review of Mick's previous CD, Within a Mile o' Jamestown, I'm pleased to say that - to my ears, at least - none of Geoff's criticisms can be levelled at this present offering.  However, there is just one slight grumble; I wish that when, as here, the main protagonist is ably assisted by five other musicians, the disc shouldn't be called (as it is in the booklet and on his website) a 'solo album'.

This excellent CD is so new that I can't find it for sale anywhere at present, but I'm sure Google will be able to tell us in a few days time.  If not, you can contact Mick himself at: mickmulveymusic@googlemail.com