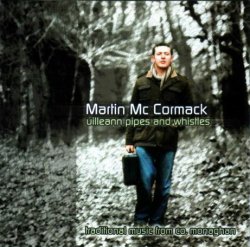 The subtitle traditional music from Co Monaghan gives you a simple description of what you get from this twentysomething piper and a few of his friends.  His youth defies Seamus Ennis's old adage that it takes 21 years to become a true piper, the playing on this record shows remarkable maturity.  The choice of tunes runs from the piping classics such as The Groves Hornpipe and Down the Back Lane to relatively recent compositions by Vincent Broderick and Charlie Lennon, but all the tunes fit the pipes or whistle nicely and Martin always sounds fully in control of the tune and the ornamentation.  In his phrasing and use of ornamentation, he demonstrates the sort of restraint and integrity more associated with older players and not commonly found among the younger generation of pipers.  While having great technical skill, Martin uses it to produce a really enjoyable musical experience.

The pace and rhythm combine to allow the tunes to bounce along very pleasingly, getting a foot tapping momentum seemingly effortlessly.  Of particular note is Martin's playing of the Carolan piece Madam Maxwell; accompanied by harp and guitar with some counterpoint on fiddle this track would grace anything by Liam O'Flynn.  The articulation of the notes is precise without being over precious, the ornamentation is sparse but everything is combined into a very satisfying arrangement indeed.

The pipes Martin plays are a modern concert pitch set built by the late master pipemaker Dave Williams and expertly maintained and reeded by Eamon Curran.  The set produces a lovely tone and is nicely in tune.  The regulators and drones are well balanced to the chanter.  The single slow air on the CD, Aisling Gheal showcases the full tonal range of the set to perfection.

The accompaniment on bouzouki and harp adds just enough to the dance tunes without dominating or driving the pace.  Indeed many a session guitar player should take note of Sean Mc Elwain's understated playing on some of the early tracks.  His playing when accompanying the whistle is appropriately more forceful.  It's a pity the bodhrán and bongos don't make such a positive contribution; indeed the ascending and descending tones on the drum on the jigs The Humours of Drimnagh are an unnecessary distraction.

Finally, and to show that he is not just a very competent solo piper but he is also a sensitive duet player, Martin is joined on the last track by Laura Beagan on fiddle for a rousing set of reels.

Production standards of Irish traditional music CDs rival any classical recording these days and this production is no exception, all the instruments are very well mixed and there is a clear feeling that the engineer caught all the players at their ease.  The brief but informative sleeve note accompanying the record give plenty of background on both the tunes and the players.

As a first CD, and one by such a young man at that, this record will be enjoyed again and again and we look forward over the coming years to more of the same.  This one is available from Custy's, Claddagh, or Martin's own website: mccormackmusic.com