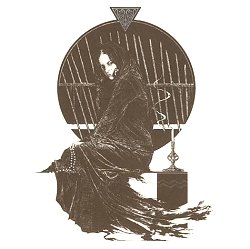 I was very much in two minds about this CD when I first opened the padded bag: a folded card sleeve of a sort I'd never seen before; a drawing of a dark lady on the front and of a wizard-like face on the back (neither of which seem to have a lot to do with the songs, as I found when listening to them).  The press release started well, mentioning 'classic ballads from the traveller tradition' - but then the dread words 'folk-punk' came up, so I skimmed for a bit 'til I found 'Irish Traditional Music Archive' ... so I though I'd have a look at the booklet notes.  Here I found Father had a Knife from Jasper Smith, and What Put the Blood? from Mary Delaney, even mentioning the MT Records CD on which it was found ... so I thought I really had better stop reading and play the CD.  I did, and found a four-piece group from Dublin, who appear to relish their roots.

My first thought was (in the tenth year since our founder's death) "Keith would have loved this!"  Here's a bit of track 2, Daffodil Mulligan, and I think you'll see what I mean.  As you may guess, this was written by Harry Donovan and concerns the daughter of Biddy - another Donovan composition.  This sort of treatment carries on up to, and including, track 8, The Tri-Coloured House, a Traveller version of An Acre of Land from Mary Kate McDonagh, then settled in Leitrim - lovely!

At which point things change.  Gone is the smile on the face, the rough Dub approach ... and the traditional songs, for the most part.  Lullaby is a strange, atmospheric instrumental, followed by an old Incredible String Band song, followed by one they wrote themselves, Cold Old Fire.  This is a fine song, and contains the wonderful characterisation of the Dole Office as "the button factory".  The final track is a sad farewell song from a clipper ship sailor retired to Massachusetts.

There's plenty to admire in this 'final third' of the CD - but it's nothing like so enjoyable, to me, at least, as the first two thirds were.  I should explain that the group's name come from the fact that the originating 'folk-punk duo' were Ian and Daragh Lynch, and that it was Ian who worked at ITMA.  This may help to explain the quality and depth of research found in the booklet notes - an excellent piece of work.