Here's Luck to a Man

This album is a digital version of a unique and classic set of field-recordings made by Mike Yates in the late sixties and early seventies. 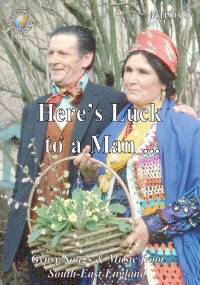 It features various Gypsy singers from the south-east of England, led by the wonderful Mary Ann Haynes and Jasper Smith, with other items by Minty, Levi and Derby Smith, Chris Willett, Joe and Lena Jones, Bill Ellson and Alice Penfold.

It delivers incredible value for money, since it contains 39 tracks, plus a 32-page A5-size booklet packed with authoritative and accurate background information on the English Romanies, and the events that led to the recordings.  The booklet also provides the lyrics to all the tracks, and complete alternative versions to some of the major songs.

As I wrote before (when reviewing the Wiggy Smith CD Band of Gold), for me one of the chief attractions of the English Gypsy style of delivering traditional song is that it offers a sort of aural time-warp across the centuries.  It's a by-product of the Traveller respect for the old ways and traditional values.  They sing it as they learned it, so you get a continuity of fundamental style going back through generations, even allowing for the oral/aural process introducing involuntary evolution as the 'chinese whispers' kick in - necessitated by having to carry it all in your head.

Of course this evolution also gets coloured over time by various techniques reflecting a love of drama and story-telling, to hold the interest of the listener with pauses or extended notes, with breaks in the rhythm, unexpected curtailments and even changes of key.  These are sometimes wrongly interpreted as memory lapses or lack of ability by the uninitiated.  In fact it's more likely to be due to some phrase or piece of melody has been misheard maybe five generations back but it remains defiantly sung 'because that's the way that so-and-so sang it'.

However, there are alas too few who appreciate the English Gypsies' contribution to the preservation of the nation's oral tradition both in terms of its lyrics and of the grand old rural singing styles.  Each year there are fewer Gypsy singers, for the younger generation have too many distractions and too many other priorities to want to dedicate time to learning a songs about a life they can no longer relate to.

Eighteen of the tracks feature Mary Ann Haynes, who I guess must have been in her late sixties at the time of the recordings.  Her voice is a joy to hear, being rich, ripe and earthy, although at times betraying the effects of a hard life in uncompromising conditions.  Her pacing and phrasing are unhurried and natural in the best English traditional style, while the songs themselves have variety of melody within the verses which never fail to attract the listener's interest.

Jasper Smith is an equally accomplished singer, though with a sound and style different to Mary Ann Haynes.

Around the time of the recordings he must have been in his early fifties and his voice is therefore younger and lighter, with a pleasant vibrato and naturally good articulation which help make the words more readily accessible.  His singing of Georgie (sound clip) and Shooting Spark's Cocks Up provide fine examples of his contrasting repertoire.  Jasper's relaxed and confident performance underpins the quality of his contribution to this album - indeed his eight items include a couple of lurid stories of murder and supernatural retribution which are so beloved of wide-eyed children around the fire.

There are four further tracks from the Smith family - Jasper's big sister Minty, whose voice has the same light and delicate characteristics, and elder brother Levi, whose voice shows to a greater extent the effects of living outdoors

with the wind whistling up your trousers and the rain pouring down your neck.  Jasper's son Derby provides the final track, singing his own song on the hardship of life on the road, Will There Be Any Travellers in Heaven? (sound clip) to an old Jimmy Rogers' tune about hobos, and accompanying himself on the guitar, maybe an early example of how the new Romany generation was already finding more inspiration within Country Music.  As it happens, a colour photo of Jasper and Minty Smith provides the cover for the CD case, while within the booklet there are a further four pages of colour photos of the Smiths and the other principal performers.

These other performers ably compliment the main contributions from Mrs Haynes and the Smiths.

Bill Ellson provides three sprightly tunes on the mouth-organ, well-executed with plenty of vamping, assisted by Derby Smith on guitar in one case.

Some singers are better than others, some songs are more abbreviated than others (personally I don’t mind abbreviation – it makes them more enigmatic), but they all have an absolute honesty of presentation and an adherence to a traditional style that had evolved over hundreds of years within the British Isles -

one which is is now fast disappearing.  A style which is free from artifice, and in tune with the slow symphony of the English countryside.  Just listen to Mary Ann Haynes sing my favourite track, Sailor Boy (sound clip) or Long A-Growing and you should understand what I mean.

All in all this CD provides another valuable contribution to the storehouse of recorded English rural traditional song.  I recommend it without hesitation.