The London Lasses and Pete Quinn

The London Lasses and Pete Quinn

One of the greatest strengths of traditional Irish music is the ability and willingness of its more open minded exponents to respond to changing circumstances and new influences and graft them onto the existing music so that it is perpetually evolving without ever losing sight of its essential traditional basis.

It is my confirmed belief that no other single city or town in Ireland or wherever the Irish diaspora have settled, has played a more significant role in this evolution during the course of the 20th century than London and its Irish community.  Just over a hundred years ago in the late 1890s, the London Gaelic League organised the first ever Irish ceili at the Bloomsbury Hall.  The League's idealised bourgeois notions of Irish culture may have had little to do with the rural working class music which the great collector George Petrie described as 'the exclusive property of the peasantry', but many of their members were involved in the formation of a number of South and East London's famous marching bands.  These Drums 'n' Fife and Pipe bands were the training ground for many musicians who went on to play in the famous ceili bands which packed London dancehalls between the wars.

Most significant of all was the emigration boom period following WWII which brought more great musicians from every corner of Ireland into contact in one place at the same time than even the Golden Age of Coleman and Morrison in New York in the '20s and '30s.  At the legendary London pub sessions of the '50s and '60s, the greatest representatives of the last generation who could be said to play in the old regional styles sat next to each other in pubs like the Devonshire Arms and the Black Cap, and found common ground through mutual respect and admiration.  Box players from Galway and flute players from Leitrim learned Highland Flings from Donegal and Slides and Polkas from Cork and Kerry, and developed a repertoire and style of playing which included the very best elements from every known aspect of the Irish tradition.

The resulting melting pot London style was then passed on to a new generation of young London Irish musicians of unprecedented technical excellence thanks to the expert guidance of such great music teachers as the late Tommy Maguire and the ubiquitous and seemingly tireless Brendan Mulkere.

Now, anyone who has followed the London Irish scene over the years is well aware of the abundance of outstanding individual players which we have had the privilege and pleasure of hearing. 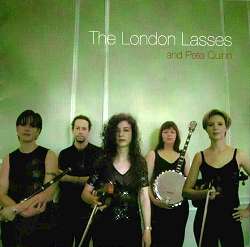 However, for some reason which I have never quite understood, London has never produced a recording traditional group which has managed to achieve international recognition and success.  However, all things being equal, this situation could now change with this release of the recording debut of the London Lasses.  In the booklet of this superb CD, Brendan McGlinchey describes an identifiable London style of Irish traditional music as that of the London Lasses and I wholeheartedly agree.

With the now permanent addition of Pete Quinn on piano and guest Sue Cullen on vocals, the London Lasses are Karen Ryan (fiddle and whistles), Sharon Whelton (flute and whistles), Bernie Conneely (tenor banjo) and Elaine Conwell (fiddle).  The Lasses' timely debut comes at a time when the London Irish session scene has hit a low ebb and when traditional Irish group recordings in general have not been particularly inspired in recent years.  It is cause for celebration then that, together with the excellent sound engineer and producer John McCormack, the Lasses have managed to come up with an album that sounds fresh and inventive, diverse and entertaining while never being anything less than totally traditional.  Conneely's banjo style has a London lilt reminiscent of the playing of Sean Casey and John Carty and oozes that special subtlety which only the most confident and relaxed players possess, while providing a steady driving undercurrent for the dancetune arrangements.  Whelton's flute is imaginative and powerful, occasionally calling to mind the late great Josie McDermott and often providing the icing for this very rich musical confection.  Both Ryan and Conwell are superb solo fiddlers of enormous talent but when they combine forces to provide a twin-fiddle front for the band the sound of the group moves up a gear or two and you are left in no doubt that you are listening to something special.  Many of the sets are arranged so as to allow this outstanding fiddle team to shine and when they do they sparkle like proverbial diamonds.  To this powerhouse quartet add the old fashioned but funky piano accompaniment of Pete Quinn and the sultry soulful voice of Sue Cullen on the four songs and you have an album that would be difficult to improve on.  Right up there as a contender for Best Album of the Year.

The CD is now distributed in the UK by Proper distribution and in Ireland by Claddagh distribution. Also the band can be contacted directly at:  london.lasses@virgin.net