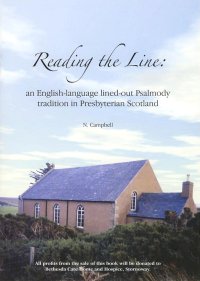 This little 36-page booklet was written as a result of claims recently made by Prof Willie Ruff of Yale University that US Gospel music was influenced by the Gaelic-language lining-out worship tradition, brought to North Carolina by Highland settlers.  Whilst not refuting these claims, it makes it clear that, while Gaelic psalmody has preserved this singing style, lining-out in English was once standard practice in the Scottish Lowlands and actually came into Scotland due to English influence.  Accordingly, it's perfectly possible that the American practice derives from English settlers instead, or as well.

Unfortunately, from our point of view, the booklet deals more or less exclusively with the history of lining-out, rather than with the details of the practice itself - so there are no musical examples.  Nonetheless it's an interesting piece of research on a subject which has been raised in these pages on more than one occasion - in Articles and in Letters.

The booklet starts, as it must, with the Westminster Assembly of Divines of 1644, where the practice was instituted, though probably not initiated.  Little is said of its surprisingly short heyday - just 100 or so years to the mid-18th century, but there is much discussion of its decline, through to the present day.  This discussion is restricted, as the subtitle indicates, to the Scottish experience.

It would appear that lining-out was driven out of the Church by the late 18th century 'Gentrification' of British society - which also robbed us of Church bands, west gallery singing, morris dancing, feasts, fairs and much else of value in popular culture.  The reaction against its removal was very strong, as is so often the case with things which are perceived to be 'ancient', yet are actually of only a few generations' duration.  Several good stories are included, like the woman in Kerriemuir scuttling out of the church when an unlined psalm was sung, but coming back in again for the prayers and sermon.  Or a precentor at the Infirmary Street congregation of the Original Secession in Edinburgh, who tried to compromise with the innovating movement by reading out two lines at a time instead of the customary one.  He found himself physically rebuked: 'Dr Paxton, who was then officiating, leaning over the pulpit, chastised the insubordinate official by striking him on the head with the psalm-book'.

Subsequent chapters cover The Line in Retreat, The Late Victorian Eclipse, The English Line in the North, Free Presbyterian Lined Psalmody, The Future in English, Gaelic and in America.  In the course of these, we discover that lining-out was also practiced in France, Hungary, Germany, the Ukraine at various times in the past, and that several ex-patriot communities in the USA retain it to the present day.  Interestingly, we also find that a Gaelic Psalmody group from Lewis have travelled to cultural festivals in England, France and the US in recent years.  Norman Campbell suggests that Gaelic Psalmody may become only a performance event at cultural festivals, if the Gaelic religious services cease - although 'A great deal of activity has gone into efforts to interpret and preserve Gaelic psalm-singing in the last ten years'.

In his Conclusions section, Campbell brings us up to date with the situation:

In the Highlands of Scotland, at the time of writing (2005) English lining-out has reached the same stage in the Free Presbyterian Church as it had in the Lowlands in the 1890s: a custom almost exclusively tied to communion table services.  Thus today, in the Aberdeen, Perth and Fort William congregations of the Free Presbyterian Church, and most congregations north and west of them, the line is given out in English at Communion table singing, if someone competent is present.  The tunes Coleshill, Dundee and Kilmarnock seem to predominate although others are known.  In island congregations, while there are still often Gaelic psalms during the Communion Sabbath morning service, there are almost invariably some English lined-out psalms too.  In Lewis and Harris Free Presbyterian congregations the psalm may occasionally be lined in English during funeral services, or at pre-funeral 'wakes' held at 9pm on the two evenings prior to the funeral.

During the early 1990s, with the death of many of the older Gaelic-speaking men, a shortage of those also able to give out the line in English had made itself apparent.  One consequence was that the tradition was discontinued for the time being in the Edinburgh congregation of the Free Presbyterian Church.  However, since then it has been recommenced in Fort William. Most importantly, there are now signs of renewed interest among some older men; the skill is not linked to fluency in Gaelic and a number of young men have now emerged who are competent in precenting in the manner recommended by the Westminster Divines in 1644.

As I indicated, this little book is probably well outside the scope of most MT readers, but it's an interesting read nonetheless.

All profits from the sale of the booklet, which costs Ł4.99, will go to the Bethesda Hospice and Care Home in Stornoway.  The booklet is available for Ł5:75 (inc post and package) from Norman Campbell, 2 Garden Rd, Stornoway, Isle of Lewis, Scotland, HS1 2QJ.