The Tern and the Swallow 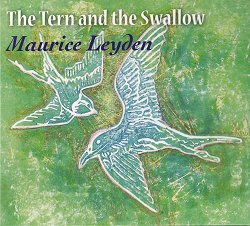 No matter whether he is singing a happy or a sad song, you feel brightened by the voice of Maurice Leyden - well known in Ireland and beyond as a performer, a broadcaster, a writer and a recognised authority on the songs of his native Ulster, where he has actively promoted the tradition for many years.

Maurice's latest CD, The Tern and the Swallow, is a perfect balance of songs lively and contemplative.  And if you are a fan of good unaccompanied singing you will be delighted to learn that ten out the seventeen tracks consist of Maurice's voice alone.

On the remaining seven songs he is joined by various combinations of a group of stellar musicians - Andy Irvine on mandolin and harmonica, Arty McGlynn on guitar, Dermot Byrne on accordion, Conor Caldwell on fiddle, Michael Clarkson on flute and whistle, Trevor Stewart on uilleann pipes and Maurice's own daughter, Anna Leyden, adding piano and even a one hundred-year-old harmonium to the mix.

The CD notes are fascinating, revealing as much interest in the origin of the tunes as is in the source singers.  You feel that you are in the company of an aficionado whom you could trust to add a verse where one is needed - and to admit what he has done - as happens in the title song of this disc.

All the material is rooted in the counties of Antrim, Armagh, Tyrone, Derry, Fermanagh and Donegal - so Cavan and Monaghan are just going to have to sing a little louder if they want to be included next time.

There is a strong theme of emigration running through ten of the songs, although of these many are optimistic despite the leave-taking.  Other songs deal with courtship, true love, unrequited love, carousing and transportation, while through them all run the beautiful names of Ulster's rivers and mountains, her trees and flowers, her sea loughs and her birdsong, in every season of the year.

Sam Henry's Songs of the People collection features prominently, yet Maurice often chooses to include songs that are less familiar.  One such is the opening track, The Faughanside - a cheery celebration of locality from as far back as 1935 and sung here to a different tune from Eddie Butcher's version. An uplifting opening to the collection.

The Tern and the Swallow features Maurice singing acapella and is, for me, one of the highlights of this CD. First heard - and probably written by - a County Tyrone eel fisherman called Nailly Coney, Maurice has added two verses of his own:

When the cuckoo is calling o'er woodland and valley
And the tern and the swallow flies over our bay
Then it's longing I be for the land of my fathers
Where Bann and Blackwater sweep down to Lough Neagh.


Another fine solo finds Maurice giving us Sweet John is the Handsomest Man - a County Down song with a gentle march rhythm and a wonderful back story, for Sam Henry had it sung to him by a man who had been ploughing with a team of horses, but left the animals to their own devices while he attended to the far more important business of passing on the song.  So in a way we owe this wonderful warble to some extremely accommodating equine music lovers!

Green Grows the Laurel is a song frequently heard - yet who knew that it began its life as part of a play that premiered on Broadway in 1931 and eventually morphed into the musical Oklahoma?  (Sadly, without the traditional songs).

One of the most optimistic emigration stories concerns Jamie, lovely Jamie whose beloved has concealed five hundred pounds in gold - in her stays!  (As this wealth was laced into the aforementioned undergarments let's hope it was paper money).  Retitled Baltimore's Fair Plains, the song can be traced back to Bushmills in County Antrim in the 1870s, yet it resurfaced in the Adirondack Mountains of New York State in 1941 - Maurice's sleeve notes proving once again that songs have a secret evolution all their own.

In The Lurgan Braes the singer's regret for a girl left behind in far off Portadown is given added poignancy by a tender violin and harmonica accompaniment.  Originally printed in John Ord's Bothy Songs and Ballads this song binds the Scottish and Ulster traditions together, for the young man is one of so many who travelled between both lands in search of a livelihood and here pours out his heartache beside Kelvin's purling stream.

Paddys Evermore is a rollicking, forward-looking song of emigration based on a tune from O'Neil's Music of Ireland - which I am more familiar with as the air to Peter Crowley.  The story is that of a real ship called The Heart of Erin which sailed from Belfast to the Bay of Fundy and the words first appeared in a chapbook version in 1822, discovered by John Moulden whilst looking into the source of this fine song. Lively singing from Maurice here, as ever.

Among the remaining songs on The Tern and the Swallow I was really struck by Young Kate of Glenkeen, where the descriptions of the rivers and mountains of Counties Derry and Antrim - not to mention young Kate herself - are so vivid that if you close your eyes you will see them appearing as you listen:

The snow I have seen freshly falling on Slemish's top as I stood;
the wild rose I've seen on Slievegallion just cleaving the emerald hood;
and the snow from the clouds newly driven, the flowers o' the mountain o' Shean -
'Tis the colour that nature has given the cheeks of young Kate of Glenkeen.


This is a stunning love song from the pen of Andrew Orr, whose pen name was The Ploughman Poet.  It was Sam Henry who coupled the words to the melody of The Aghalee Heroes, which comes from the Orange song tradition.  Henry declared that he had deliberately chosen this tune as the Songs of the People are kept free from political bias and yet so fine an air should not be lost. Indeed.

Other fine songs include The Sweet Bogside - rearranged by Maurice to morph into a lamentation for Derry's Bogside and ending with a heartrending echo of its quiet melody on Trevor Stewart's uilleann pipes.

Another gem is The Emigrant's Farewell which, although so reminiscent of other well known traditional songs, is twinned here with an exquisite and tragic melody that belies the brave predictions of ale in New Brunswick - a penny a glass.

I have always found The Wee Weaver to be a rather gloomy, modal song but on this recording it is brightened considerably by the contrast between Maurice's voice and that of his daughter, Anna, who also plays gorgeous harmonies on the American harmonium.  No emigration on the cards here - the wee weaver is staying confined to his loom, where he can keep an eye on lovely Mary.

There is a humorous song written by Maurice about the perils of seeking romance online - The Virtual Lover - which will definitely raise a smile at any singing session.

And then we have The Boys of Mullaghbawn, which mentions that rare creature in traditional song, the humane landlord - in this case, Squire Jackson - and is given a gentle swing by Maurice and his gathering of musicians, redolent of the waves beneath the ship on which our heroes are being transported to somewhere very far from Mullaghbawn.

But for me it is Maurice's unique arrangement of The Jug of Punch that sets my feet tapping, including as it does a delightful lilt between verses.  He traces the origin of the song as far back as 1840 and I sincerely hope this version will be heard for another century or so.

The final song, aptly described as 'the national anthem' of the traditional singing fraternity, is Here's a Health - giving a wonderful, rousing finish to this highly informative and enjoyable recording.