In his review of Kyloe's earlier compilation of Northumbrian music and song, The Quiet Hills, Rod Stradling noted that whilst it was a CD intended for a local audience, it would also be the envy of listeners further afield who lacked such a vibrant traditional arts community and ongoing oral tradition.  Andrew and Margaret Watchorn, whom Rod described as 'the stars of the show' from that previous disc, are major protagonists in that Northumbrian cultural scene. 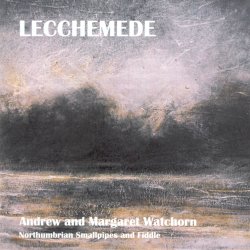 Andrew plays smallpipes.  His wife Margaret plays fiddle and piano, and sings.  They are also part of the band Dishalagie, who have been playing together since the late 1970s, and who join them on several tracks.  Andrew's own striking Turneresque painting of Lecchemede itself is on the cover.

This collection is more focused, and yet much more ambitious on many levels, than its predecessor.  At its core, the disc provides a snapshot of the repertoire of working Northumbrian traditional musicians in the early 21st century.  Of the 33 named tunes or songs contained within the CD's 18 tracks, only 13 are ascribed as 'traditional'.  The others have named composers - a sign of the continued creativity within the Northumbrian music scene.  Indeed, Margaret herself is shown to be a significant composer within this tradition.  And tunes from Sweden, America, the Shetlands, Scotland and Ireland that have long been intermarrying with the locals are also represented.

The first thing to say is this: the Watchorns' stellar status is certainly enhanced by Lecchemede.  Their duo work is simply beautiful throughout.  Enhanced by Mike Yates' crystal-clear recording, their smallpipes and fiddle tunes are object lessons in direct, sensitive, subtle playing.  Examples of this exceptional quality abound.  The way in which the lead role on the waltz Svenska Anna crosses between pipes and fiddle, until both players bound together into the crisply-articulated hornpipe Green Island (learned from Liam O'Flynn).  The beautiful interplay on the Scottish slow air Blackhall Rocks, stately and stable yet always shifting with slight shadows, overlaps and hesitations in the two instruments' handling of the melody.  The swing and pace on Hexham Chase and Jack's Tune (Margaret's own charming tune for her dancing dad).  On their performance of Cupid's Waltz / Castles in the Air (two tunes used as children's songs), the almost woodwind-y tone of Margaret's fiddle is particularly well captured.  These are seriously good players.  Jimmy Little's contribution on mouth organ is also notable on several tunes, and he is rightly honoured by having one of Margaret's hornpipes named after him.

Some of the combinations of tunes work very well, too.  A case in point is Flett from Flotta (from Aly Bain and Phil Cunningham) and the Tweedside Schottische (from the Cheviot Ranters).  I was unaccountably taken with the idea of a pipe-march leading into a schottische, presumably for those occasions when the enemy isn't quite as fearsome as expected.

For me, the band tracks are slightly less successful.  This is partly due to my own prejudice and pig-ignorance - I'm just not a great fan of that old-fashioned Cheviot Ranters sound - but also because the recording quality seems less luxurious the more instruments are involved.  On the opening track, Coupar Angus March / The Headlands, the piano seems distant and very slightly off the beat at times, as if it has been overdubbed, and there's a curiously clipped ending to the track.  On Woodlands, there are a couple of instants when the rhythm seems to go a little awry.  And there were a couple of tunes that were on the twee side of sentimental for me (Dunstan Hall and Coquetdale Waltz).  On the other hand, I did enjoy the engagingly clunky feel that Jack Dodd's G-banjo gives to Bieble's Hornpipe / President Garfield.  (Yes, it is a hornpipe about a nineteenth-century US president who was in office for four months before being assassinated in a railway station; what could be more natural and appealing than that?  And maybe it explains the clunkiness.)

There are two songs here.  One, Sae Lang Returnin, was written by Margaret's aforementioned father Jack Dodd.  It's both a tough and a sensitive song about the fears of women waiting for their fishermen to come back from sea, strong enough to stand alongside Alan Plater's Close the Coalhouse Door as at once a personal lament, an affirmation of pride and a reminder of the price of labour:

When haakin fish fresh from the brine
Aa meet with many a lady fine;
She canna redd nor bait a line
In spite of all her larnin;
Aa pander to their every wish,
Put fine fare on each fancy dish;
They grumble at the price of fish.
Ma man's sae long returnin.

It receives a strong, restrained and dignified performance by Margaret, accompanied solely by her stately piano.  She sounds slightly nervous and ill-at-ease on the other song, The Weary Cutters, in spite of an even more effective piano arrangement; again, it's a woman's lament for a man taken by the sea, but this time spirited away in the night by the press-gang.  My impression is that Margaret's singing may have been a little hampered by studio nerves - more time to settle in would possibly have allowed her to do real justice to her voice.

Earlier, I mentioned the ambitiousness of this record.  One of Margaret's own tunes, The Skaith, evokes a mysterious and eerie saltmarsh, a place of strangeness and ambivalence in local reputation.  Obviously, the skill and sensitivity of the instrumentalists are crucial in creating this effect.  But the role played by Mike Yates' production shouldn't be overlooked here either: in foregrounding or reducing the pipes' drone, or the close noises of the bow rasping on strings, he creates constantly-varying textures, almost like a reggae dub producer playing with the physicality of sounds.  This is difficult to explain - all I'd suggest is that you listen to The Skaith (and some of the other duo tracks) loud on headphones.

Based in the village of Beadell, Porteous is a nationally regarded poet whose collection The Lost Music was published by Bloodaxe Books in 1996.  She has a deep knowledge and understanding of local traditional music, history and culture, and has previously worked in collaboration with piper Chris Ormston on a recording of her long poem The Wund an' the Wetter (Iron Press, 1999), and with Alistair Anderson on the millennium musical Tam Lin, as well as collaborating with sculptors and photographers.  Her oral history book The Bonny Fisher Lad: Memories of the North Northumberland Fishing Community was described in these very pages a few years ago as 'a gem', and she has often been commissioned to write for radio.  Borderers was itself written in 2002 for a BBC Scotland documentary.  It's a powerful, complex poem that will bear many repeated listenings.  However, I have to confess I'm not yet altogether sure about whether it works as part of this CD.  I suspect in the context of a performance with these musicians in a local arts centre it would be mesmerising.  And I'd like to hear it as part of a reading of Porteous' other work.  Whether I'll often sit down wanting to hear the juxtaposition of consummately played traditional Northumbrian music and one contemporary poem (albeit one on a historical theme), I'm not sure.  More poetry might have been better.  Maybe I should just think of it like a rural landscape with dry-stone walling and an Andy Goldsworthy installation: the materials and techniques are all in keeping, but the aesthetic in that little corner is unmistakably modern.

But don't let my minor reservations put you off buying this record; for anyone with an interest in Northumbria and its music, it's unmissable.