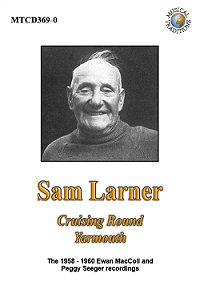 MTCD369: The Ghost Ship, When I Went a-Fishing, Maids When Youre Young, Before Daylight in the Morning, Rhymes and Sea Lore, The Maids of Australia, A Reckless Young Fellow, The Girls Around Cape Horn, The Wild Rover, The Oyster Girl, As I Lay a-Musing, A Sailor's Alphabet, Duckfoot Sue, Clear Away the Morning Dew, Sing to the Oak, No Sir, No Sir, Old Bob Ridley-O, When I was Single, The Golden Fenadier, The Wild and Wicked Youth, Now Is the Time for Fishing & talk, I Wish, I Wish, The Dockyard Gate, Green Broom, The Dolphin, The Old Miser, The Skipper and his Boy, Blackberry Fold, The Wreck of the Lifeboat, Outlandish Knight, The Tanyard side, Will Watch, Talk.
MTCD370: The Bold Princess Royal, The Captain's Whiskers, The Bonny Bunch of Roses, King William & talk, Happy and Delightful, The Chesapeake and Shannon, Coil Away the Trawl Warp, The Jolly Young Coachman, The Loss of the Ramillies, She Said she was a Virgin, Game of All Fours, The Wonderful Crocodile, Donnelly and Cooper, Cruising Round Yarmouth, Barbara Allan, Barney and Kitty, Green Grow the Laurels, The London Steamer, The Bold Young Fisherman, Windy Old Weather & talk, The Haymakers' Courtship, Henry Martin, Just as the Tide was Flowing, The Dogger Bank, Over There in Ireland, The Dark-Eyed Sailor, Butter and Cheese, Napoleon's Dream, Spurn Point, The Barley Straw, Bold General Wolfe, The White Squall, Scarborough Fair Town, Final talk.

This double offers around two-and-a-half hours of the singing and speech of one of England’s best known and most loved traditional singers.

The 67 items included here are clearly enough to offer us a rounded impression of Sam’s abilities and his approach to a wide range of songs and ditties.  We can hear that he tackles different songs in different ways.  On his more risqué items, the rollicking, rasping, rascally Sam is relishing cheekiness as he chuckles his way through all the innuendos.  When the songs have a story to tell - and Sam was one of England’s finest ballad interpreters - the superb sense of timing and the totally engaging way of unfolding the story are what catch the ear; Henry Martin, Outlandish Knight and The Golden Fenadier all have that wondrous timeless quality.  Then there is the high proportion of his repertoire that is songs of the sea to which he brings the authority and authenticity of one who has loved the life; this is especially true of his songs of fishing.

The recording quality is generally very good (as it ought to be, as nearly all was recorded on BBC equipment during the extensive sessions recorded by MacColl and Seeger when they were preparing the famed Singing The Fishing Radio Ballad).  In addition to the complete songs, there are a number of short snatches and lots of conversation; as well as being interesting it also shows the relaxation and the mutual enjoyment of company that existed.

The 46-page booklet offers complete transcriptions of all the songs, more than a dozen photos, a careful and informative introductory essay by Chris Holderness and a tribute by Martin Carthy who could be speaking for the hundreds who learned song, style and enthusiasm from Sam Larner.