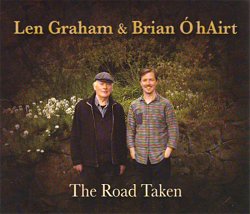 Well, this is a real pleasure - almost an entire CD of that unison singing we used to hear from Len and Joe Holmes back in the day (and from Dan Quinn and Will Duke, too).  Very nice indeed!

Brian Æ hAirt may well be a name new to many of you (it was to me) and you may be surprised to hear that he's American!  Although, from the cover photo, he looks at least half Len's age, he doesn't sound it, and the two voices work extremely well together.  As well as singing, Brian plays some very nice whistle on track 9, and adds dance (sean nµs stepping) to tracs 6 and 13.

There's a good selection and variety of songs on offer here - plenty of well-known ones in slightly different versions - and a few I've not encountered before.  Bonny Brown Jane and The Load of Kale Plants are both from Joe Holmes, and new to me.  The latter is sung solo by Len but, as it uses the tune from The Rollicking Boys Around Tanderagee, it doesn't break from the crisp rhythmic format of all the others (see more below).

There's a nice Crockery Ware as track 8, and I remember people being surprised when we first heard Maggie Murphy singing it, as it seemed such a quintessentially southern English country song.  This one was mostly John Campbell's mother's version (b.1890s) from Co Armagh, with some additions from a 19th century broadside.  Of course (as Len reminds me) they have all the elements in Ulster of the Shamrock, Rose and Thistle, and have their own versions no matter where the song originated.  It was made famous in England by Fred Cottingham, recorded by Mike Yates and published on Veteran VT108.  Not a much-sung song with only 31 Roud entries - only two of which are Irish - the others all being from England and Canada.  It's first encountered in W H Long's book, Dialect of the Isle of Wight, published in 1883.

The star of the show, in my opinion, is a great 'goodbye song' called Happy Are We All Together, to which Len has added a couple of verses.  It was first published by Allen Cunningham in 1842 - where it was falsely attributed to Burns.  My other favourite track is a well-known song, The Creel, from Dolly Keane's grandma, Mary.  This is a nice succinct version, short enough to let you hear all of it.  Lovely!

Rather obviously, singing in perfect unison requires a good deal of practice - which is helped if the material is in 'strict tempo', as it is here.  An inherent problem with this approach is that it makes it difficult to inject variety, dynamics, feeling - passion into the performances.  I remember that The Watersons and Oak seemed to be more or less alone, back in the '70s, in making the effort to sing group songs with varied tempi and broken rhythm.

OK, we know that northern Irish songs do tend to have that 'strict tempo' feel to them and, in isolation, they work very well.  But when you get a whole CD's-worth in one go, they do begin to sound a bit lifeless before too long.  Indeed, the only singer I've heard who can do it really successfully is RµisÚn White.  This is little a bit of a problem here, and I found myself longing for Len to break out of the straightjacket and give me a really passionate, solo, song!  This is, of course, only my personal opinion - you may not share it, and will surely enjoy the entire excellent CD in one go.  If not, just play it a few songs at a time.

This is a pre-release promo, and the CD doesn't seem to available just yet.  Check with CDBaby (where their last is available); it shouldn't be too long.