Over the Hills and Far Away
Traditional Irish songs and ballads 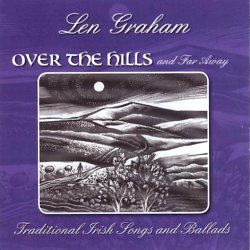 Once again from Len Graham - a whole CD with not a single thing to complain about!  If only there were more like it in these desperate times!

Len Graham has, as you probably know, a beautiful, warm, tuneful voice ... but unlike so many other similarly endowed singers, he has not been cursed by it!  He sings with care, and knows full well that the words and the tune are only a part of what makes a good performance.  He knows how to communicate what he feels about what he's singing.

This CD is 'recorded live in concert at various events during 2009', and it contains a wide variety of song types arranged into a pleasing programme.  The recording is of a very high quality, and it's startling to realise that (given the 'various events' quoted above) the mastering engineer, Jason Varley of Tumbleweed Studios, Dundalk, has managed to make all the tracks sound as if they were recorded at the same time and place.  True, there's a consistent 'big space' echo - but if it's been added after the event, it has been very well judged.

Many of the songs will be faily well known to MT readers; indeed several come from Len's long relationship with Joe Holmes, detailed in his recent excellent book on the singer, reviewed in these pages.  True Lover John is actually a version of The Grey Cock (Roud 179, Child 248), and not The Outlandish Knight which sometimes has this title in the North of Ireland.  Maybe Len (like me) has a fondness for 'night-visiting' songs and revenant ballads, since his My Willie-0 is also of this genre, and probably better known as The Bay of Biscay-O or Willie the Waterboy.  Child includes this as a part of his No 248 - erroniously, in my view - and Steve Roud agrees, giving it it's own number, Roud 22567.

The Loughdoo Poachers will be new to most readers, I think, and an example of that rare bird, the Irish poaching song.  It came from Len's Uncle Willis, who refused to send it to Sam Henry for publication on the grounds: "Are you mad?  Sure, wasn't I doing a bit of poaching myself!"  The Newry Highwayman is A Wild and a Wicked Youth, while The Sweet Bann Water is yet another night-visiting song of the Health to All True Lovers family.  Larry Morgan come from the extraordinary John Campbell, of Mullaghbawn; it's one of those 'strange journey' songs, which you really need to hear all of, to fully appreciate.

The title track, Over the Hills and Far Away, is not the Roud 8460 song of the same name, but a Jacobite song about Bonnie Prince Charlie.

I've never heard it before, but it deserves to be popular - here's a snatch (sound clip, left).  Similarly the final track, Nil 'na La was unknown to me, although it's said to be 'one of the best-known songs in the Irish tradition', so perhaps you need to hear a bit of that, too (Sound clip, right).

There's nothing more that really needs to be said about this CD - it's absolutely delightful, and thoroughly deserves a place in your collection.  Get it diurectly from Len Graham at: lengraham@ireland.com