Could there be a more apposite name for one's own record label?  Anyone with knowledge of the work of the Buncrana-born fiddler must nod their head in agreement.  For those not in the know, Liz made her debut on the recording of the 1991 Donegal-focused Fiddlesticks Festival, duetting with Paula Doohan.  Subsequently, while studying music at University College Cork, she figured in the early incarnation of Nomos, appearing on the band's first album, I Won't Be Afraid Any More. 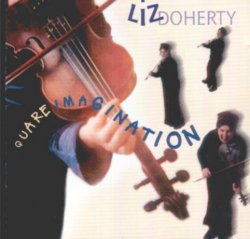 Subsequently, she lived on Cape Breton while researching her doctoral thesis on the island's music before returning to establish her own Liz Doherty Band, record her own debut CD, Last Orders (1999), spend a while with Bumblebees and also form the sixteen-piece, all-fiddle band, Fiddlesticks, from amongst her students at UCC to record Racket in the Rectory (2000).

Recently, she left academia to work full-time as a musician and now comes her second solo album, Quare Imagination, almost entirely recorded in a hostel in Culdaff in the north of the Inishowen peninsula - the exception is Jennifer Wrigley's tune, The Ba' Rag, which was recorded on Cape Breton.  That exception almost encapsulates Liz Doherty - a Donegal fiddler, playing a tune composed by an Orcadian fiddler on an island off Nova Scotia - and it's that blend of influences which characterises much of Quare Imagination.

Though resident in Cork for a decade, Liz's fiddle retains the drive and intensity of her native county, but adds touches gleaned from around the world, particularly in terms of double-stopping.  The album was produced by another internationalist, Gerry O'Connor who also appears on several tracks playing his trademark lighting quick banjo, as well as featuring on fiddle and mandolin, and there are plenty of other guests too (including Manus Lunny and Tony McManus).

However, Quare Imagination feels like the tension has dropped from Liz's shoulders and there's a gleeful spirit running through the album right from the opening moments of Jonty Sunshine, a tune composed by Nancy Kerr and James Fagan.  A set of jigs commencing with the French Canadian Le Tourment bounces along like an old jalopy (or a Hillman Imp for those with shorter memories).  But Liz can be reflective too as evinced by the extremely graceful Michael's Mazurka or her playing of the air Ansacht na nAnsacht, the tune of a song from the repertoire of Rˇise na nAmhrßn from Arranmore (but, I've not yet had a chance to check which one).

Gerry's production is both clean and warm, giving full scope to Liz's fiddle and the album comes complete with a dinky little eight-page liner booklet, replete with details of the tune sources and plenty of photographs of Liz, in most of which she appears to be laughing her head off (as she also does in the liner for Last Orders).  There's also a canny explanation of the term "quare" too for those unfamiliar with its usage.

Thankfully, Liz has resisted the temptation to pad the album with dodgy songs and, as a consequence, we're rewarded with forty-five minutes of fun, frolics and flavour.  The album is available from Busy Lizzy Records, P.O.  Box No.1, Culdaff, Inishowen, Co Donegal - www.lizdoherty.ie   Which reminds me - if you're ever in Culdaff, don't forget to drop into McGrory's, one of the best bars in Donegal, if not the whole of Ireland.