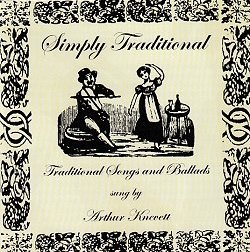 Well, this really is a surprise!  Arthur Knevett is one of my oldest friends in song, and was 'best man' at my wedding back in 1967.  In fact, I've known him since around 1964 when we both found ourselves regulars at The Fighting Cocks folk club in Kingston, Surrey, and went to the Sidmouth Folk Festival together for the first time that same year.  He has been a guest at a couple of singing weekends we've run in Stroud - and I've always loved his singing, but had assumed that he'd decided, for his own good reasons, not to record.

Another reason that this is a surprise is that he sounds on this CD almost exactly as he did when I first heard him sing 53 years ago ... and there are not many people of whom you can say that!  Lest this comment be construed as a criticism, I should add that there was rarely anything that one could fault in his singing even back then.  He took the Harry Cox approach; making only the subtlest of melodic variations, adding little of his own emotional engagement with the song, and singing rather slowly.

Indeed, this latter aspect of performance is the only thing I can immediately notice as having changed; he does sing some of these songs very slowly.  His Seven Years Did I Have a Sweetheart, from the wonderful Maggie Murphy, lasts almost seven minutes on this CD, when Maggie polished it off in five!  One of the problems with singing slowly on a CD is that the 2-second default gap between tracks means that a new song has started whilst the listener is expecting another verse from the previous one.  I find this extremely distracting, and this is the reason I always add a few seconds of silence at the end of songs on my MT records.  I'm afraid Arthur's CD displays this 'fault' and detracts from my enjoyment of the record ... but only slightly!

What about the songs?  In the brief liner notes, Arthur writes: This is an eclectic mix of songs which I have known and sung for many years.  There is no theme to the selection other than that they are all favourites and - simply traditional.  As you'll see from the above tracklist, there's little here to surprise us in terms of actual songs, although the Raggle Taggle Gypsies is Walter Pardon's little-known version, which makes a good start to the CD.  Similarly, Arthur's I Drew my Ship is to another seldom-heard tune; this time one that his mother sang ... so he really is a traditional singer!  His Lovely Molly is from Lizzie Higgins who, together with her mother Jeannie Robertson, were about the only singers from the oral tradition to have been recorded singing it - although it was published as a broadside many times.  I assume that it may well become popular again in the revival, since Sam Lee has been singing it on TV a lot recently.

What may well be a surprise is Bedlam City (Roud 968) - not a song much heard these days; indeed Kidson seems to have been the last person to encounter it, in the late 1890s.  This version is from Mr F Scarlett Potter, who submitted it to Lucy Broadwood in the early 1890s.  Another surprise follows; The Cruel Brother (Roud 26, Child 11) wasn't collected much in England, and is better known in Scotland as Fine Flowers o' the Valley.  Arthur's version is from Davies Gilbert's book Some Ancient Christmas Carols of 1823, where it's titled The Three Knights.

To finish, we get Love Farewell, a song I'd always thought to be Scottish, given the popularity of one of the Greig/Duncan versions, and I've also heard Róisín White and Rosie Stewart sing it very well in Ireland.  But Roud has rather more English versions listed, and this one is from Marina Russell, of Upway, Dorset, collected by Henry Hammond in December 1907.  Arthur learned it from a Nick Dow cassette.

So, what can I say?  For me, this entire CD is a complete delight - and, I hope, not simply because Arthur is an old friend.  It's just the sort of record I'd have liked to have produced myself: good songs; beautifully sung, and no flash!  And, since it's being stocked by The Living Tradition, one can hope that it might get more exposure than it would with MT.  It certainly deserves to!  You can also get it directly from Arthur via: www.arthurknevett.co.uk