Two CDs which I looked forward to playing - and, having played them, have left me profoundly disappointed. 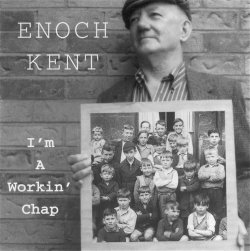 I'm old enough to have heard Enoch Kent at the Singers Club in 1962-4, and always enjoyed his singing.  His style was accessible without being 'folky', and I always felt he was the strongest element in The Exiles, a group in which he later sang with Gordon McCulloch, Bobby Campbell and sometimes Paul Lennihan.  Then, like a number of other singers, he emigrated to North America in the '70s.

Having heard one of these, Louis Killen, sing superbly at Sidmouth this year, I was hoping for a similarly uplifting performance from Enoch.  It was not to be.  If, as this CD's booklet would have us believe, Enoch Kent really is 'in the upper-most brackets of the performing and writing community we call "folk"' in his adopted home, then the Canadian folk scene must be avid for smoothly delivered, over-romanticised, maudlin rubbish.  The cover photo tells you all you really need to know!

There used to be ordinary working people who had loads of songs about Lords and King's daughters.  Then there are people who have loads of songs about work, yet who will have seldom wiped the sweat from their brows, except, perhaps, from too much sunbathing.  Enoch appears to have quite a number of songs about work - many of which he has written himself.  The sensitive listener might well wish he hadn't.  Louis Killen sings a superb modern song on the decline of the Newfoundland fishing industry - if only Enoch had learned it instead of composing verses like:

in his execrable No More Cod on the Banks.

There are some traditional songs here - six in fact - though only two have not been 'improved' by instrumental accompaniments, and a further two have had 'additional' verses composed by the singer.  All are delivered in that smooth, yet emotion-laden, style which leaves me feeling as if there may have been poison in the glass of wine. 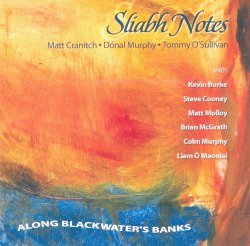 I don't need to be quite so old, as to have been delighted to find Julia and John Clifford playing regularly in the second-nearest pub to our flat in Camden Town in the late '60s, or to have been spellbound by the playing of Jackie Daly when he was over in England a lot in the early-'70s, and when we'd scraped up enough spare cash to by his Topic LP Music from Sliabh Luachra Vol. 6. (12TS358).

Over the years I've heard quite a bit of the music from Sliabh Luachra (the Rushy Mountain), the area of Cork, Kerry and Limerick drained by this particular Blackwater, and I've liked almost all of it.  The most particular pleasure came from hearing the glorious CD of Johnny O'Leary, some five years ago, and then seeing him playing for dancing at the Wadebridge Festival a few months later.  Wonderful, vigorous dance music - all function and no frills.

This present CD has all the tunes, but too many frills - and far too few thrills!  One certainly can't fault the musicianship of any of this trio, Matt Cranich, Dónal Murphy and Tommy O'Sulivan, or of their six additional helpers playing here - but maybe that's half the problem.  The music seems, to me at least, a soft, safe and sanitised version of the stuff I've enjoyed for more than half my life.  Its style of playing appears to have been designed for listeners who are strangers to the gritty reality of the great traditional musicians - who, one would assume, the present players hold in some esteem.  To compare this music with that of Johnny O'Leary, for example, gives you the 'art as object' versus 'art as process' argument in a nutshell.  I know with which side my vote falls.