We have been told for many years that folksongs are transmitted orally.  That certainly seemed to be the idea of the Edwardian song collectors who, 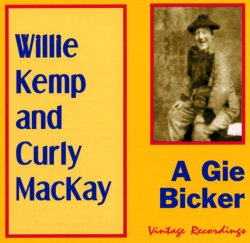 whilst acknowledging the presence of the broadside press, never quite got their heads around the idea that broadsides might have helped spread and preserve folksong texts.  Collectors in the 1950s also looked for oral transmission and often ignored the fact that many singers were singing 'folksongs' that they had learnt at school, in versions arranged for singing by Edwardian collectors such as Cecil Sharp and Ralph Vaughan Williams.  American collectors faced another problem when they began collecting songs in the 1950s and '60s, namely that singers were singing songs, ballads and blues that they had learnt from old 78 rpm gramophone records.

During the 1920s the American gramophone companies discovered a market for recordings by local singers - mainly in the southern states.  Recording crews were dispatched to the South where they recorded local singers and musicians.  The crews would then return to their bases, usually in the North, where the records would be pressed before being shipped south to be sold.  Nowadays we are grateful that these recordings were made, because they preserve many unique singing and musical styles that could possibly have vanished almost without trace had the recordings not been made.  And the recordings stimulated interest not only in the South, but in other regions of America as well.  Interestingly, the same sort of thing was going on in Scotland from the 1930s onwards.  Several recording companies were involved, although only one major company, Beltona Records, devoted itself solely to Scottish music.

Willie Kemp, Curly Mackay, George Morris and Tom Wright were singers and musicians from the North-east of Scotland, the region where Gavin Greig and James Duncan found so many songs and ballads at the beginning of the last century, and their recordings, made in the 1930s and '40s, are testaments to an outstanding and flourishing tradition.  A few recordings by Kemp and Mackay have appeared before (there are a handful on Topic's Voice of the People series) but these four CDs provide us with a far wider breadth of material and we can now see how their songs and music have spread, via their recordings, to all the corners of Scotland.  Take, for example, Davy Stewart's well-known recording of I am a Miller to my Trade (available on volume 5 of The Voice of the People - Topic TSCD655) in which Davy beats his hands and elbows on a wooden table to re-create the clattering sound of the mill.  Well, listen to George Morris singing The Buchan Miller (The Cornkisters - volume 2) and you'll see that Davy was not the first to use this background sound to his singing.  And, it's the same with Willie Kemp's Imphm (The Cornkisters - volume 2) or his Wee Toon Clerk (A Gie Bicker).  I have recorded versions of both songs in the Borders (available on the album Borderers - Kyloe CD 102) and Kemp's influence is clear on both of the Border versions.

There are numerous well-known songs here, The Ball o Kirriemeer, The Tinkler's Waddin, MacFarlane o the Sprotts,The Muckin o Geordie's Byre, The Guise o Tough, The Bonny Lass o Fyvie, The Miles and the Roads to Dundee, A Pair o Nicky Tams, Jock Bruce o the Fornet, Sleepytoon, The Barnyards o Delgarty, The Buchan Plooman, Drumdelgie, The Jolly Ploughboys and The Dying Ploughboy - all of which turn up repeatedly in folksong collections - along with any number of lesser-known pieces.  One of these is a lovely parody on the well-known Farmer's Boy - here called Neeps Tae Pluck (The Cornkisters - volume 3) - which begins with this glorious exchange between a farmer and his would-be servant:

There is even an a-capella version of The Battle of Harlaw (The Cornkisters - volume 3), recorded by Kemp in Edinburgh in 1936.  I find this track fascinating, especially as Kemp's tune is not exactly the one commonly encountered today.

Then there are the instrumental tracks played by Thomas 'Curly' MacKay on accordion, who, so we are told, was 'born into the Stewart traveling family' in 1912. 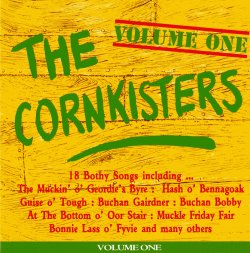 MacKay teamed up with Willie Kemp and George Morris (Kemp's brother-in-law) when they met in a BBC studio in Aberdeen during the late 1920s and his recorded duets with Willie Kemp are some of the high-points on these CDs.  At times MacKay accompanied Kemp's singing.  At other times MacKay's accordion is joined by Kemp on ocarina, jew's-harp or penny-whistle.  Part 1 of A Gie Bicker (on the album of the same name) is a splendidly played set of MacKenzie Highlanders and The Inverness Gathering, while Part 2 features The Barren Rocks of Aden, Donald was a Piper, The Battle of Harlaw (or at least the tune used for this ballad) plus one tune that is new to me.  On MacFarlane o the Sprotts (also on A Gie Bicker).  Willie diddles the tune to Curly's accordion, before joining in on jew's-harp.  And so it goes on, one splendid set of tunes followed by another.  Occasionally, as on The Buchan Scottische (The Cornkisters - volume 1), Mackay swapped his accordion for a concertina, which he played with equal ease.

Also included are examples of double-sided tracks where the performers often interspersed snatches of songs and tunes behind a simple dialogue - A Lark at the Mike on volume 2 of The Cornkisters, or The Hikers on volume 1, for example.  They are the sort of things that groups such as Gid Tanner's Skillet Lickers or Ernest Stoneman's Blue Ridge Cornshuckers were recording at the same time in America, and I cannot help but wonder if any of these American recordings influenced Beltona's decision to issue their own similar recordings.

These recordings, of what was once a local tradition, are quite simply amazing.  Willie Kemp and company were keeping alive a tradition that, without Beltona's help, would probably have disappeared.  Sure, we would have had their names, mentioned by later performers, but, chances are, we would never have heard them ourselves and they would only have survived as lingering memories.

That's the good news.  Unfortunately there is very little by way of background information on the performers and nothing at all about the songs and tunes, apart from recording and original issue dates.  Nor are we told very much about the Beltona Recording Company.  (Readers can, though, check out Bill Dean-Myatt's Musical Traditions article or else have a look at his web-page: www.beltonaproject.co.uk

It seems that Sleepytown Records, who have issued this material, now have the rights to use the Beltona label name, and they are using the label to reissue material from Beltona's original catalogue.  To find out more, contact Sleepytown at Sleepy Studio, Woodend Leask, Ellon, Aberdeenshire, AB41 8JY (Tel: 01779-841-848 or E-mail: info@beltona.co.uk).