Singing and Dancing Wherever She Goes

A Life of Maud Karpeles
by Simona Pakenham 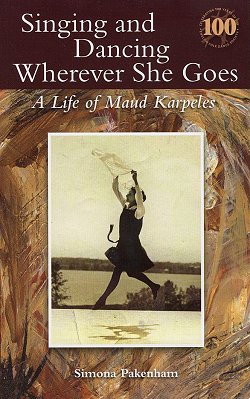 Its publication coinciding with the 100th anniversary of the founding of the English Folk Dance Society, this book seeks to place one of the most important figures in the creation of that society in the place she deserves - the spotlight, rather than sidelined, as has been the case for most of those 100 years.

To quote the EFDSS website: ... Maud Karpeles’ biography, [was] written by the late Simona Pakenham.  A personal friend of Maud's, Pakenham has combined information from a number of sources: Maud’s unpublished autobiography, notebooks, letters and diaries, supplemented by the reminiscences of many friends.  At a time when folk music and arts are enjoying a visible renaissance, this book reveals the invaluable and unique contribution Karpeles made to the development of the folk revival, fieldwork, the evolution of the English Folk Dance Society (EFDS) and the life and work of Cecil Sharp.

In another recent review, I wondered about the efficacy of a press release being sent to a reviewer of a record or book ... so often they hinder, rather than help, the task.  Either they give a false impression of the item to be reviewed, or can set the reviewer searching for the quality to which the blurb has adverted.  Once again, this is the case here - the e-mail telling of the book's publication implied that it was rather wonderful that a middle class woman was able to work so effectively with the rough and insular Appalachian mountain dwellers.  It doesn't seem all that remarkable to me.  Most people have an inbuilt urge to do good works if they have the means - consider the millions raised in charitable donations every year.  And it is frequently remarked that the upper classes had the self-confidence to mingle with anyone, high or low, who interested them.  Maud Karpeles was able to do what she did because she was independently rich and very confident of her own abilities (despite regularly claiming that she wasn't!)  Indeed, to me what is the strangest thing in this story is the extent to which she was prepared to be sidelined, both by Cecil Sharp himself and by the Society which, together, they had created.

Actually, it appears that it was her work for and with the International Folk Music Council (IFMC) which she most enjoyed, and for which she was most lauded.  It also allowed her a huge amount (for those times) of foreigh travel - another thing she greatly enjoyed, even though she seems to have been very prone to seasickness.  Judging by the information in the book, it appears that Maud created the IFMC, virtually single-handedly, in 1946-7, at the age of 61.  One gets the impression that being in charge, and organising everything herself, was what she enjoyed most.  That and the conferences, and the parties, that the Council hosted.  Certainly, it seems that her not being in charge of the activities of the EFDS (but believing that she should be) was at the root of her problems with that Society, and the enmity she encountered from them in the 1950s.

Something that the book shows most clearly is the extent to which the English folk music scene, right up to the 1960s, was almost entirely populated by the upper-middle and upper classes.  I kept thinking "So where are the people from whom they collected all these thousands of songs and tunes and dances?"  Given that it's clear that both Sharp and Karpeles had no trouble at all engaging with what was almost entirely a working class set of sources, it is surprising that absolutely none of their names appear in the numerous accounts of EFDS and IFMC social activities.  Indeed, it does rather appear that Cecil Sharp was the only one for whom the songs, tunes and dances were more important that the socialising!

One of the other things the book does - perhaps unintentionally? - is to point out very clearly the stark difference between what Sharp thought were the best, finest, most valuable, songs and tunes that he (and Maud) collected, and the way in which they were ultimately presented to the public.  He appears to have been exceptionally discerning in his perception of what was 'right' in songs, tunes and dances, always preferring the oldest and 'truest' texts and melodies.  And this was particularly the case with the morris dances - he was most insistent on the 'right' ways of performing them (ultimately causing a damaging rift between himself and Mary Neal), yet was perfectly happy to have the songs performed by classically trained singers and musicians, with his own, completely untraditional, accompaniments.

In the end, I was struck by the similarity between this book and the booklet accompanying the EFDSS' CD publication, William Kimber: Absolutely Classic.  In my review of that I wrote, of the EFDSS: 'They know about every Society meeting he ever attended ... every Ring meeting or Summer School appearance is documented, and most particularly, every Important Personage who ever deigned to notice him is faithfully recorded.'  Maud Karpeles’ biography is rather similar: there's a great deal about her activities with the EFDS and IFMC, but information about what she and Sharp collected, and from whom, is very sketchy.

We frequently read that a 'fine tune', or a 'good version' was encountered, but learn nothing of what they thought was good or fine about them.  There are a great many footnotes (6 pages of them, infuriatingly placed at the end of the book, rather than at the foot of the page concerned), but when a quote mentions a singer or a song, the footnote only tells us where, in the various documents used to compile the book,  that quote was extracted.  As an example, whilst in Newfoundland in 1929, Maud wrote that she had 'run into a bevy of good singers, mostly related ... took down some first rate tunes', but the footnote only states: MK Autobiography, p.170.

Since this biography was compiled from 'information from a number of sources: Maud’s unpublished autobiography, notebooks, letters and diaries, supplemented by the reminiscences of many friends' it is inevitable that the text contains many direct quotations from these sources.  These are sometimes poorly presented.  Usually a phrase or sentence will occur in single quotes within the text, while a longer quote is shown as a separate, indented paragraph.  Unfortunately, this rule is not strictly adhered to, and one is often unsure of what is quotation and what Simona Pakenham's text.

It is clear that Maud Karpeles was an extraordinary woman, incredibly hardworking, and remarkably selfless in her dedication to the causes she supported.  For example, for most of its early years the IFMC was run out of small rooms in Maud's various flats - sometimes even out of her bedroom!  At the same time, it's amazing that from the time of her creation of the Council, 1946, to the last ime it's mentioned, 1975, it was still arguing, inconclusively, about the definition of a 'folk song'.  No one, it seems, was able to see that a 'folk song' and a traditional song need not be - and often aren't - the same thing!

Enough!  This is an interesting book, about an extraordinary woman, but it leaves out so much that this reviewer would have found interesting - the songs, tunes and dances she collected and, most of all the people from whom they came.