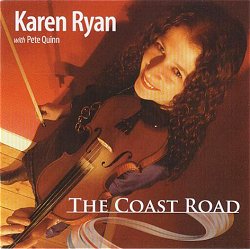 Clo Iar Chonnacht have a reputation for releasing quality Irish traditional music CDs and this one is no exception.  It's a thoroughly enjoyable recording.  There is a mix of mainly reels and jigs, but with a hornpipe, a couple of polkas, a waltz, a slow air and a song.  There is also a variety of ensembles, duets and some group playing so that the CD gives the impression of listening in to a high quality session.

Fiddle player Karen Ryan is well embedded into the trad Irish scene in London.  A founder member of the London Lasses and Pete Quinn, she teaches, judges and also organises the Return to Camden Festival.  Although from London, Karen Ryan's parents are both from West Ireland and she has inherited the traditions of Connemara from her Mother's side of the family.  Some of the music was recorded on a trip back home with her relatives in Galway.

Her fiddle playing is confident, energetic and expressive and she puts in some interesting twists and turns into the tunes which are mainly well known favourites.  Ryan takes one track on the tin whistle and is also a handy banjo player, though not to the same standard as her fiddling and it sounds as if she has twisted the setting of Shandon Bells to fit more comfortably under her fingers.  Overall there is plenty of evidence of her London heritage in hints of the fierce drive of Danny Meehan mixed with Brian Rooney's creativeness.  The sleeve notes mention the influence of New York's Andy McGann but her tone is quite different to McGann's so it's not so easy to hear him in her playing

The CD starts with a real swing with three duets from fiddle and piano; reels followed by jigs, then hornpipes, showcasing Karen's vigorous fiddle playing and Pete Quinn's excellent accompaniment and the opening track is certainly strong enough to pull anybody into wanting to hear more.  There's a bit of a dip in the next track of polkas which seemed both geographically and musically out of place here.  They just seemed too long and repetitive and just don't have the Sliabh Luachra style to make this a good track.  By contrast, the slow air, the song tune Sliabh Geal cCua, learned from Kerryman Seamus Begley, is beautiful and tender, and not overworked demonstrating Karen's sense of musical integrity.  Karen's Auntie Nancie's song An Draighnean Donn is delicate and captivating.  The CD finished very strongly with a final set of reels from fiddle and piano.

It is obvious Karen and Pete enjoy the music and have the depth of skill to let the music speak for itself and for the most part the recording is clean and straight, without tricks, too much 'drip', or over arrangement.  There's no sense that the players are stretched or 'performing' to a crowd, the music is always centre stage and is just gorgeous for that.  It takes a lot of sensitivity and understanding to take old tunes like Miss McLeod's (here interestingly titled Miss McCloud's) or The Lady on the Island and make then sound new and vital.  Karen deserves a lot of credit for the way the choice of tunes on this record reinforce the impression that this is a few friends playing for an intimate circle.

The CD is well produced, the piano might be a bit too high in the mix for some and the squeak of fingers on guitar strings is a personal dislike, but these are minor niggles.  The sleeve notes give just enough information about sources and influences to introduce Karen to those who don't know her as a solo player.

Available for Karen's own website or Copperplate, this CD should give pleasure to enthusiasts and casual listeners alike, and there's a lot of depth that will reward repeated listening.