They'll be Good Yet

Followers of music from County Clare should be familiar with concertina player Kitty Hayes.  Kitty released a CD on the Clachan label in 2001 which highlighted her wonderful rhythmic playing of old dance tunes.  Kitty had started playing aroung Milltown Malbay in her teens in the 1940s but hardly played a note for years after she married flute player Josie Hayes. 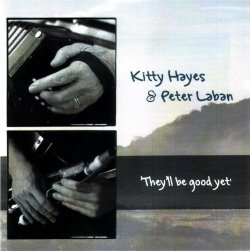 After Josie's death about a dozen years ago, Kitty started to play out again.  Since 2001, she has been playing with piper Peter Laban at local sessions, particularly Gleeson's at Coore.  This CD allows listeners from further afield to hear their music.  Concertina and pipes duets are an unusual but not unique musical combination and this CD shows how effectively the two instruments can combine.

One of the first thing you notice about the music on this record is the pace which is very steady, almost slow, but the ear quickly adapts to the tempo and you start to pick up the rhythmic punch of the concertina.  Peter's pipes are pitched in C and the smooth tone of the flat-pitched pipes and concertina blend nicely.  Peter is very adept on the regulators and provides a mixture of long and short chords under the tunes.  Kitty's style involves a lot of playing the tune on both hands in two octaves, or regular mirroring of key notes in the lower octave.  The piper has to be sensitive to this, to avoid masking it with the regulators.  Most of the time Peter seems to pull this delicate balancing act off pretty well.  The duet playing is close and you get the impression that the players have enjoyed playing together and building up a set of common tunes and settings.  There are some interesting variants of familiar tunes and the lack of any additional accompaniment allows these unusual settings to be heard very cleanly.

The choice of tunes shows a wide range of influences, Josie Hayes was a regular duet partner with Junior Crehan for years and Kitty has a few of Junior's own compositions.  There are sets associated with Michael Coleman and other tunes passed down by Kitty's father who used to play with Willie Clancy's father Gilbert.  Peter contributes a few tunes from his early days learning the pipes.  Beside the usual fare of jigs and reels, there are a few hornpies, slip jigs and a slow air on the concertina.

Both players take a solo, Kitty offers a couple of old reels and shows lots of bounce in her playing.  Peter's set of reels is a very technical piece of pipering, showing his command of the wide range of melodic variation and ornamentation traditionally expected in a test piece.  Again the slower pace allows these tricks to be showcased effectively.

However well in tune and well balanced the pipes may be, there are some notes that just don't fit conventional tuning, most obvious the low E or its equivalent on a flat chanter.  Pitching Winnie Hayes' Jig in E minor results in an unfortunate dischord at the start of the first part which mars an otherwise pleasant tune which is, as often as not, played a fifth higher than presented here.  The concept of the 'lonesome note' and favouring modal tunes and settings seems common all around Clare, yet in a solo performance of The Girl that Broke my Heart Kitty switches the tune from minor to major, giving an interesting twist to the second part.

Recorded over a couple of sessions in Kitty's kitchen, the production of this CD is a credit to sound engineer Martin O'Malley.  Sleeve notes by Peter give background and context to the music and the booklet is augmented by a fine introduction by Tom Munnelly and a wide range of photos of the two musicians at work.

Recommended listening for anybody with an interest in old style traditional music, this CD is available on-line from Custy's, Claddagh or Peter and Kitty's own website www.theyllbegoodyet.com