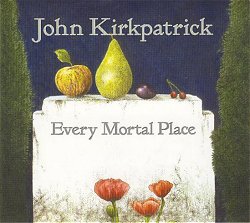 Oh, if only all CD reviews were as easy as this to write!  This is, as might be expected, a lovely record.  It is also a rather unusual one, in that all the songs and tunes come from Shropshire; John's home for almost 40 years.  And there are also a few surprises to be enjoyed as we go along.

I guess it should first be stated that this is a CD entirely for, and from, the 'folk scene' - but there's no good reason why most MT readers shouldn't enjoy it too.  Almost all the songs are sourced from traditional singers, and the tunes mainly from books and MSS of para-traditional figures like John Moore and John Buttrey.  We start with one of John Moore's tunes, Wednesday Night teamed-up with The Great Eastern Polka, played in a quite simple way for the first track of a CD - but things gradually 'develop' as more of the instruments that John plays come into the mix: two-row melodeon; Anglo concertina; one-row melodeon; baritone Anglo; and bass Anglo - rarely all at once, I'm reieved to say!  I was slightly put off by the insistent hit on the on-beat towards the start of this track, but fades as things progess (or I get used to it!) and the whole set ends most enjoyably.

The first song is The Packman's Staff, which comes from the repertoire of Ray Driscoll, who also contributes three other songs to the mix later on.  I suppose it's due to rarely visiting a folk club and listening almost exclusively to traditional singers for the past ten years, but John's very 'folk club' style of singing on this track came as a bit of a shock.  However, one certainly can't accuse him of not putting any emotion into his singing - and after the second or third time of listening, I have to say that I really rather like it.

Ray Driscoll's slightly unusual Lord Randal comes next, sung in a far more quiet and reflective manner, and this is followed by an even more unusual Shoropshire souling song, Soul, Soul.  John says this is an amalgamation of two tunes collected by Charlotte Burne in the late-19th century, and spends some time discussing the Lydian mode which this amalgamation has produced, and how alien it sounds to English ears.  It doesn't sound strange to me - more like a 'double-tonic' pipe tune.  He's also added loads of interesting verses from both within and without the County, making this a word-hunter's delight.  We also get the first instance of the 'surprises' I mentioned earlier - John's wife, Sally, sings harmony on the choruses, joined by an over-dubbed John.  Nothing too startling here, but there's more of this to come later.

Next up is May Bradley's lovely Sweet Swansea, sung pretty-much straight, and without many of May's linguistic / melodic / metic peculiarities - which, for me, robs the song of a lot of its charm.  Kindly, John mentions the MT CD of her, where you can hear the real thing.  A set of three Shropshire tunes follow, Shrewsbury Quarry / Lasses / Rakes, played on the two button accodions he uses - first one, then the other, then both at once.

Next we have a more-or-less Fred Jordan John Barleycorn, followed by Under the Leaves of Life from May Bradley, from which the title of this CD is drawn.  Again, despite adding a verse of two from other versions and replacing May's inexplicable final word 'die' with the more obviously correct 'Queen', he never gets near the extraordinarily eerie quality with which she invests the whole song.  Maybe he should have tried it unaccompanied?

Three John Moore jigs come next, New Dancers / The Bateuse / The What D'ye Call It, played on melodeons and Anglos followed by another Ray Driscoll song, Old Father Fox.  This is a very nice rendition, and features an expanded version of the John & Sally chorus.  Next we have what may be the stand-out track of the CD, Bill Smith's Tommy Suet's Ball, and again, John mentions the MT CD.  I think he's tidied up the text and tune a bit, but it's the sheer gusto of the performance which convinces, plus the truly superb 'Billy Cotton Band Show' John & Sally chorus and vocal marching band!  Lovely!

We couldn't have a Shropshire CD without the wonderful A Shropshire Lad (aka Captain Webb from Dawley) from the pens of John Betjeman and Jim Parker.  You'll doubtlessly have heard this dozens of times ... but it's still brilliant!  Next comes John Buttrey's The Shropshire Militia Hornpipe, which is a rather familiar tune to me, but not by this name.  Ray Driscoll's final contribution is his (possibly unique) Pompalarie Jig, a Waterloo song from the victorous side, and n'ere a broken ring or torn hankie in sight!

And now for something completely different; the final track is a carol from Charlotte Burne's book, a local version of While Shepherds Watched.  The John & Sally group becomes a full choir through the magic of digital recording, courtesy of Oliver Knight at Panda Sound, and reminds me that the Stroud Carols will very soon ring out from a pub not very far from here.  The real Christmas is about to start - and this is a lovely way to end a thoroughly enjoyable record.