Galloway House
Music and songs from a Galloway pub 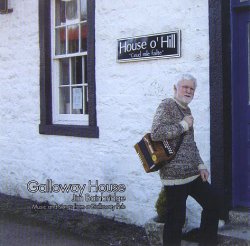 What can I say?  If you enjoy Jim Bainbridge (and how can you not?), you'll love this CD.

We start with John Watt's Kelty Clippie, which seems to epitomise the sort of song Jim likes to sing.  The melodeon accompaniment is all you could ask for - simple, quiet, musical - and does just what it ought to do ... it helps the song along.  Next, two Northumbrian hornpipes, The Sheffield / Miss Thompson's, show just what a fine player Jim is - aided by wife Francie on spoons.  The A music of Miss Thompson's is very similar to, but not the same as, Lodge Road - many players have been confused by this.

O'Hooligan's Ball, Frank Crumit's hilarious take on Irish/American partying is next - I still absolutely love the rhyming of 'pantry' with 'gallantry'.  The two waltzes from Alabaman fiddler James Bryan are a real delight - and beautifully played.  Tommy Armstrong's tongue-twisting Wor Nanny's A Mazer is sung just slowly enough for you to hear all the words (all too rare, in my experience), and Jimmy Duffy's Barndances, from Fermanagh, are splendid.  So is Gallowa' Hills, learned from Davie Stewart's brother John, and much enjoyed by the Galloway audience.  The two gorgeous two-steps from the Shepherds, Little Bornt Tattie / Quarryman's, should need no introduction from me, however I don't suppose many of you will have heard Ed Pickford's Nee Bliddy Good (Gettin Aald).  Maybe you need to be over 60 to fully appreciate the humour, but I think this is just wonderful!  Try this:

Now I think that you'll find that you can't get your wind;
It's nee bliddy good gettin aald.
And the short time ye have, ye spend on the lav;
It's nee bliddy good gettin aald.
Someone's only to say "Hoo ye deein today?"
An you're chewin the lugs off their heed;
And if half of it's true they say's wrong with you,
There's people more healthy that's deed!

The set of three jigs ends with the lovely Elsie Marley - maybe the best English slip-jig?  The very funny Politician's Song here misses out the killer sting-in-the-tail which Jim now sings - what a shame.  It would be a mistake, I think to comment in detail on all of the 22 tracks on this CD, but a few further highlights should be mentioned.  Although the majority of songs here are humourous, it would be a big mistake to think that jim doesn't do serious songs.  Anyone who has had the pleasure of hearing him sing Donal Og will be aware that he could - and does - make a splendid job of Tommy Armstrong's chilling Durham Strike.  Track 19, Kerry Mills / If There Wasn't Any Women In The World features a pair of barndances from the playing of Jack Doyle of Inch, Co Kerry.  I helped popularise the second tune, but with the title Kerry Mills Barndance - learned from an earlier Jim Bainbridge recording, where he had the title wrong!  So it goes.