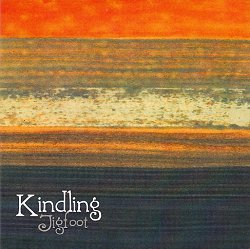 I find that I reviewed Jigfoot's first CD some six years ago - but that it didn't impress me all that much - * please see note below.  This is born out by the fact that when I first encountered them live, at Bampton's first ECMW, I was very impressed ... but did not remember their CD.  Indeed, it was only today when I typed 'jigfoot.htm' as the filename for this review that I found that such a file - and thus a review - already existed.  But the past is another country, and this review will be very different.

My 'first' encounter with the band, at Bampton, was with a great band that played music I liked, in a very danceable way.  Particularly, I noticed that they played Mittel's Hornpipe (a tune I also play) as a dotted rather than a plain hornpipe; and what a difference that made to this terrific tune, which I'd never heard played dotted before.

Having now met them several times, I know that they feature two very good fiddlers, an interesting guitarist, a terrific cellist (aren't they all?) and the most unusual melodeon player I've ever heard playing English music.  Which rather brings me to the only slight reservation I have with this CD ... although, to be perfectly fair, this is true with any recording of a small group of musicians.  The recording doesn't sound like the band live.  When I listen to Jigfoot live, I can pay attention to a particular player for a short period - I can be astounded by what Kim Sheil is doing on the melodeaon's basses, I can admire Jill Redmond's cello playing, or the twin fiddles of Cath Watkins and Ben Potton.  And this is primarily because I can see them, and connect their body language with the sounds I hear ... and you can't do that with a recording, no matter how cleverly it's mixed and mastered.  Even, as here, when a particular player is brought forward in the mix, you do hear their particular 'solo', but not how their playing makes a contribution to the overall band sound.  As someone who's participated in numerous attempts at recording dance bands, I know how difficult it is to make the resulting CD sound like the band really does, so I'm not criticising this recording - but do I wish it sounded as exciting as Jigfoot does live.

What about the music then?  There are certainly some interesting tunes here, together with a lot of well-known ones.  I suspect that the Bang Up Hornpipe will be new to many listeners - this version is from my native Hampshire and the 1822 Richard Pyle MS.  Jacky Robinson (not the better-known Jack Robinson) may also be new to some, and comes from Alice Gillington's book Songs of the Open Road, as do Fish and Taters (which we used to play in Oak) and a most unusual Bonnets So Blue - which sounds like a version of Scan Tester's Man in the Moon, at least in its A part.

The Brighton is a slow, dotted hornpipe, again from the Pyle MS, which I'd never heard before.  To reverse the Jigfoot process on Mittel's tune, I bet this would sound good un-dotted.  Whinham's Reel is a pretty well-known polka ... and deservedly so!  Off She Goes is also well-known, but I have to say that I miss the version with the extra beats in the B music.  Interesting (to me, at least) is the addition of some 3/4 over the top of the 6/8 tune in the final B music ... something I really enjoy doing myself (far too often, probably).

Beatrice Hill's Three Handed Reel is a tune we played with EII - but never as fast as this!  I do like the way the fiddles hit the first note of the phrases just ahead of the beat - it really makes a tune GO!  We end with the lovely Sussex Cotillion, played with bags of 'florid' - which admirably suits it.  However, coming straight after the hectic pace of the Three Handed Reel it does sound incredibly slow, and makes the final track a bit of an anticlimax.

But I really do like this record, and this band.  Lots of good tunes, lots of good playing, some very interesting variations, and plenty of wellie.  It's available direct from: www.jigfoot.com only £10 + p&p.

Having spent much of yesterday searching for Jigfoot's first CD, Nothing at All - today I found it.  I have no idea why I was so grumpy back in October 2011, but I now consider that I was needlessly unkind to this generally excellent CD.  I think it may have been the several clippings from reviews published in the press release that accompanied it, plus a genuine dislike of what they'd done to Old Tom of Oxford that soured my enjoyment of the whole thing.  This latter was quite unfair on my part; but I do tend to feel a bit prickly about people playing Bampton tunes in a way which could never be danced to in the tradition.  It's a matter of giving respect to the world's only unbroken morris tradition.  That said, there's absolutely no reason why people from outwith the Bampton tradition should share my concerns.

I'll still stand by my negative comments about Nothing at All, but I wish I'd praised it's positive aspects a lot more.  Firstly, I think it was a far more accurate example of what Jigfoot actually sound like than 2017's Kindling; particularly in that you can hear the cello to much better advantage throughout, and in Glorishears you do actually get to hear the melodeon.  Also that Barham Down, The Presbyterian Hornpipe and the Pleasures of Salisbury are all great and little-known tunes, and that most of the CD is thoroughly enjoyable.