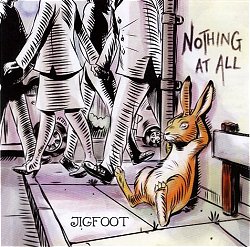 I often wonder about the efficacy of a press release being sent to a reviewer of a record or book ... so often they hinder, rather than help, the task.  Either they give a false impression of the item to be reviewed or, if accurate, can set the reviewer searching, in vain, for the quality to which the blurb has adverted.  This is exactly the case here - a quote from another review states: 'a style that mixes traditional folk with gypsy jazz and undertones of baroque'.  You may imagine that this would prompt me to put the thing straight in the bin ... it nearly did, but the repertoire looked interesting, so I persevered.  And I'm glad I did, because it really is quite a nice record.

No question that the playing is good - neat and crisp - though rather on the fast side for me ... and for most dancers I would guess.  Another press release quote: 'All of the band either dance or play regularly for dancing, and understand how the music and the dance work together, whether it’s morris, e-ceilidh, or ballroom classics'.  Well, I still think it's all a bit fast - certainly this is true for the two morris dance tunes presented here.  There's also the matter of the two stepdances, from Scan Tester and Lemmie Brazil.  Neither are played in what I would call a typical southern English stepdance rhythm.

The insert notes are very brief - rarely more than one sentence per tune - and rather reinforce the idea that the band members don't actually know too much about them.  Track 1, here titled the Gloucester Hornpipe, is actually the Gloucestershire Hornpipe - the Gloucester Hornpipe is a different tune.  Similarly, Barham Down, a nice 3/2 hornpipe, has the note: 'Hornpipes in 3/2 are generally associated with the north west of England, but the name locates this one in Kent.'  Well, Frank Kidson has told us that: 'About 1760 the hornpipe [previously in 3/2] underwent a radical change, for it was turned into common time and was altered in character.'  Barham Down was published in Playford's Dancing Master,11th Ed,1701, so it, like all other hornpipies of that era, no matter where they originated, would have been in 3/2.  The association with the north west of England is simply because some of them have remained popular in that form in that geographical region up to the present day - not generally the case for the rest of the country.  As to why this should have been so ... answers on a postcard, please.

Both the insert and the blurb allude to 'the Jigfoot treatment' regarding the way the band play the tunes.  This got me listening for the 'gypsy jazz and undertones of baroque' sound - to no avail.  As far as I was able to tell, 'the Jigfoot treatment' consists of playing the tune straight for 2 or 3 times through, and then dropping the melody instruments in volume and allowing the backing to come to the fore.  Additionally, a modification of the melody (not enough to call it a harmony or counter-melody) is sometimes added, as is the guitar using some unusual chords.  Occasionally this last works well - at other times it's intrusive, or even unpleasant.

You may have noticed that two of the tracks, Nothing at All and Good Ale are not dance tunes, but songs.  I don't much care for them.  Nick Bradford doesn't sing badly, but his well-educated, urban voice sits a little uncomfortably with these essentially rural ditties.

So - a pleasant sounding record which would work well as background music to a party, containing a good selection of nice tunes, a couple of which (Barham Down and Presbyterian Hornpipe) are not that well-known.  It only needed to be just a little bit better ... but the CD's title is, unfortunately, rather apt.