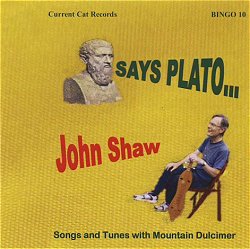 It's a considerable pleasure to get this second CD from John Shaw - I'd not realised that ten years had passed since I reviewed his first.  As I wrote there 'The Appalachian dulcimer is not an easy instrument to play well; most practitioners I've heard seem to opt for either simple strumming or dazzling pyrotechnics.  John takes the middle path - satisfying himself (and me) by merely playing very well.'  Here's an example - track 3, A Favourite Duet by Mr Holmes - from the MS of William Winter (1774-1861), shoemaker and fiddler from the Quantock Hills.  The MS gives no clue as to why it's called a duet - so John and Geoff Black (dulcimer) have turned it into one, with John adding bass as an overdub - very nice!

I wasn't entirely sure about John's singing on the first CD - I'd heard him sing better live - and I think the same is true here.  Also, in the ten years, his voice has deepened (as it does for us all), but I don't think he's lowered the pitch of the songs - leaving him straining a bit on the high notes.  But we do get some good songs: a nice and very full version of Will the Weaver; a good Barbara Allen from Dorset; and a St James's Hospital from Virginia.  Also from America comes a version of The Grey Cock which Sharp collected from Jane Gentry of North Carolina in 1916.  Exactly why it's called Bird of Early Dawn here is not explained, but it's a great song that I've sung for years without knowing its exact provenance.  As to the title song, Plato's Advice, I'm afaid John thinks rather more of it than I do.

Track 14 - A Farmer's Son So Sweet - is interesting, as it was one of the songs Alice Snow noted from her grandmother, and sent to Cecil Sharp in 1906.  The tune is essentially the same as that used by Chris Bartram for the lovely Fare Thee Well My Dearest Dear.  The text is simple and implies far more than it tells - the clip is the final two verses.

We end with Stony Broke in No Man's Land, which John calls 'a British counterpart to Brother Can You Spare a Dime' - well, I don't think it fully measures up to that description, but John's arrangement with fiddle, guitar and chorus vocals, is extremely effective.