Ballads Long and Short
the best of every sort 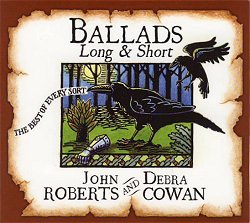 This American CD just popped through my letter-box - and is something of a surprise.  You probably know that John Roberts is an Englishman, long domiciled in the US, while Debra Cowan was a Californian maths teacher who 'went to live in Edinburgh, Scotland for six months.  There she learned the art of unaccompanied singing' as the press release tells us.  This may be considered quite an achievement, since it takes most people half a lifetime!

The CD also perfectly illustrates the folly of choosing a snappy title, but one which prompts reviewers to question its accuracy.  I'm sure that this present title, followed by this track list, will prompt questions like "Since when were drinking songs, farewells or sea shanties considered to be ballads?  And who says these are the best of every sort?"  The title is a quote from track 2, The Broadside Man, a modern 'street cry' written by Bill Meek and John Conolly - also not a ballad.

Well, never mind - what about the singing of these supposčd ballads?  The first thing one notices is that it all sounds very 'folky' - lots of concertina, banjo and guitar accompaniment, and never a chorus or refrain that isn't sung in harmony.  I certainly have no complaints whatsoever about the quality of the voices, harmonies or instrumental playing - but I do find it difficult to see how these enhance the telling of a ballad or story song.  For me, they distract.

As you may imagine, I get quite a few CDs of what might be called 'traditional songs' these days, since 'folk' is, we're told, popular again.  Few get reviewed here because I can't see how most could possibly fit with our remit of dealing with musical traditions.  They either sound like nineties pop music, or like nineties folk music ... twenty years out of date!  Most of the former come from the UK, and most of the latter from the US.

Which sort of brings me round to why I felt this CD was something of a surprise.  John Roberts is pretty well-known in the States, and Debra Cowan already has four CDs to her credit.  I just can't imagine a pair of English singers of similar stature releasing a record like this one.  Most people here now realise that ballads are best sung solo ... and so don't generally release CDs containing (or purporting to contain) only ballads.  When they do sing ballads, they generally don't sing them accompanied, in strict tempo, or with no melodic variation.  Here, each singer has just one unaccompanied song: John Roberts Jim Jones and Debra Cowan The Bonny Hind.  Both sing them fairly well, but each verse is to exactly the same tunes as all the others, and neither sound as if they've given much thought to the words or the story.  To her credit, Debra does have one verse with an extra line - but I'm sure this was how her source, Tony Rose, sang it.  Indeed, when source singers are mentioned in the notes, they are all revivalists ... it's as if it's not possible to hear recordings of British traditional singers in the USA.  I know this isn't the case because many purchasers of MT Records' CDs (both actual and virtual) come from there.  Still, I do realise that this present offering will sell far better than one comprising all ballads (the best of every sort), sung in the proper way, and sourced from recordings of real traditional singers, could possibly have done.  I'll finish with a comment that far too frequently ends my reviews these days - what a shame!