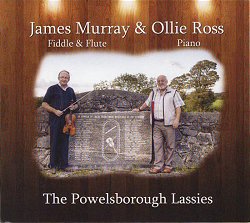 Bernard Flaherty in his book Trip to Sligo describes James Murray as 'one of the finest flute players in the country for sheer style'.  This is Murray's first solo record made at the age of 67.  He's been heard on various Sligo compilations such as As We Got Them and The Mountain Road, usually in duet with his long-time playing partner, Jimmy Murphy on fiddle.  On this record we hear him on flute but the CD also features his fiddle playing, as well as a couple of songs.  This is a fascinating collection of music, much of it influenced by the Sligo repertoire popularised in the 1920s and '30s by the 78s of Coleman, Morrison and Killoran, but includes a lot of individuality and some of Murray's own compositions.

Murray seems most at home in local sessions or small ceili bands playing for pleasure or dancing, the music is lively and, in the fiddle playing especially, there is a real bounce to the music.  In his rather rambling sleeve notes, Murray himself says he wants the music to come from the heart and for the record not to be note-perfect, played, as he says, by robots so well-rehearsed that all the soul is lost.  There are no real slips or mistakes in Murray's playing, it's too much engrained in his being to come out wrong but the willingness to take a chance on variations and variety is obviously there.  This is a very honest record put together from just three nights' recording in his own home.  There is over 70 minutes of music on the CD, mostly jigs and reels.

Murray's flute playing is probably not what it was in his heyday and you can hear age's effects on his breath control but, especially on the tracks where he uses an Eb flute, loaned for one night's recording, the tone is bright and the flute is driven hard to generate a powerful sound that must have filled many a pub session.  He uses his own Wilkes concert flute for the rest of the flute tracks.  His technique is a classic example of Sligo style, very well executed rolls and triplets break up the tunes and his melodic variations are subtle and very much in the Sligo idiom.

Murray's fiddle playing, at first listen, sounds untutored and raw but he has some good technique and while the rolls in The Blackthorn Reel sound truncated, he demonstrates a good bow hand on the set of lively jigs which follow on the CD and the later set of hornpipes titled The Chaffpool Post.  Ollie Ross is a well-known accompanist in the area who does a good job with simple but sensitive piano accompaniment, and for variety we are given a number of tracks without the piano.

The tune names reflect the local area, referencing for example Powelsborough and Chaffpool, but as always, several of these tunes have other names when played in Clare or Galway.  A tune commonly known as The Kilavill Reel here gets an even more local title, named the Stonepark Reel after a townland near Ballymote.

There are three songs in the old ballad style, well delivered but maybe not to everybody's taste, and a slow air composed by Murray for a fellow flute player Peter Walsh.

The small booklet included in the sleeve provides fulsome praise for just about every player that supported or played with Murray as well as a few anecdotes of Sligo legend Fred Finn.  A good editor would possibly have been helpful and perhaps could have suggested a few comments on the actual tunes which is sadly lacking.

This is a CD that should be in the collection of anybody interested in Irish regional style and Sligo music in particular.  Tracking the CD down is going to be a challenge; while Comhaltas Ceoltoiri Eireann are responsible for publishing it, it's nowhere to be found on their on-line shop.  Your best bet is to buy it in person if you are in Sligo or try Liber Bookshop of Sligo town http://liber.ie/product/the-powelsborough-lassies/ for mail-order.  The effort to find a copy will be worthwhile. Readers in the UK can get copies from Michael Lancaster at: mlportraits@yahoo.co.uk  or  01543 898772.