Released on the button accordionist's own label, this album was recorded in November, 1998 at Whelan's on Dublin's Wexford Street.  Essentially a homecoming concert for a Dubliner long-based in the USA, it began as a simple duo performance in which he was accompanied by Garry O'Briain, but developed into a full-blown session as the pair were subsequently joined by Kevin Conneff on bodhrán, Mick O'Connor's flute and Seán Keane's fiddle (except he'd had to borrow one from a fellow audience member). 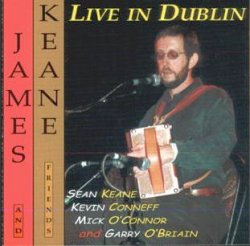 The liner notes include Jim Kelly's review of the gig for Irish Music magazine and actually include James's own corrections to the on-stage banter, though there's nothing particularly startling there (for example, 'The Castle Céilí Band won the 1965 All-Ireland in Thurles, not Nenagh' or 'When I said that ****** ****** was a complete gobshite, I had been misled by scurrilous allegations that he had poisoned his neighbour's dogs').

Don't expect perfect sound quality as the gig was recorded on a cassette tape and there is significant background hiss, but do anticipate much enjoyment listening to this album.  There seems to have been little tinkering with the order, so, for instance, when James announces that he will be playing a couple of Martin Mulhaire's tunes later on, he does so.  This means that it's possible to feel James and Garry becoming both more involved in their music and more relaxed as the evening progresses.  That relaxation becomes apparent early on in one of James's renowned pieces of playing, his rendition of one of the airs associated with John Doherty, Paddy's Rambles Through the Park, enough by itself to question anyone who doubts whether the accordion can ever be a creative instrument.  By the time he gets to Tom Ward's Downfall his fingers are flying, even though he notes at the end of the set 'You wouldn't believe how nervous I am.  Honest to God, you wouldn't think I'd ever played in Dublin before.')

The session commences with track ten when Mick O'Connor and Seán Keane arrive on stage for The Old Shelling Set (James also tries to haste their entrance with 'Come on, lads, the last bus is leaving The Quays now'), though it's the subsequent The Church Street Polkas where the feathers begin to fly.  The album ends with a splendid set of reels kicked off by Patrick Kelly's and completed by Rakish Paddy, with The Bucks of Oranmore intervening.  By now the quintet are really flying, leaving the listener wondering just exactly where the session continued afterwards.

An enjoyable evening for musicians and audience and certainly one for the CD player.