Pride of the Season

The Bold Dragoon, Pride Of The Season, The Isle Of France, The Rambling Blade, Suit Of Grey, The Deluded Lover, A Brisk Young Widow, The Valiant Sailor, When Fishes Fly, Annan Water, The Slave’s Lament, The Ploughman’s Love, The Victory. 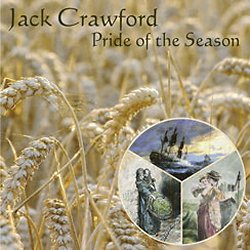 I was very pleased to receive this CD; an Englishman singing mainly traditional English songs.  On closer inspection I find most of the songs are unaccompanied (just a few sensitive contributions from Anahata: melodeon, cello and voice, and Mary Humphreys: concertina, banjo and voice), and that the singer is from my own generation and someone I'd never even heard of before.  All good and unexpected news!

The songs, too, appear to be unusual - although some familiar ones are hidden behind unfamiliar titles.  Those you may not have heard before include Pride of the Season from Newfoundland, The Valiant Sailor which is a nice version of Polly on the Shore, When Fishes Fly AKA No, My Love, Not I, The Slave's Lament which is probably a Burns composition based on the Virginny family of broadsides from which Australia springs, and The Ploughman's Love better known as The Flandyke Shore.

Jack Crawford sings with a warm, if slightly nasal tone, and an elusive accent which displays little of the Derbyshire where he lives and might best be descrbed as 'folky' or 'English countryside'.  Unusually, his sense of pitch is absolutely perfect, which stands him in good stead with songs like Pride of the Season which has some tricky intervals.

The 8-page booklet tells us something about the singer and (warmly welcomed) something about the songs' sources.  In the former, Jack cites 'the singers now gone who kept these songs alive' and says that if his singing them has given pleasure it is because he is 'standing on the shoulders of giants'.  I find this odd, since many of the songs here come from printed sources.  His named sources are three traditional and two revival singers - and the 'shoulders of giants' cliché ought to indicate that he has learned from (and possibly surpassed) said 'giants'.  Sadly and unsurprisingly, I feel that this is not the case.  In truth, he has gleaned little more than the tune and the words from them.  He uses little or no melodic or rhythmic variation in his singing and, given that most of the songs are on the gloomy side, the result is a bit boring.

This is not to say that he has done no work - on the contrary, his song notes indicate that he has often modified the words and tunes to suit his take on the songs.  But that's only part 1 - he then needs to do a similar amount of work on how he will sing them, so as to communicate his feelings about them.  To me, it appears that he has not done so ... or that the recording studio situation has prevented him from making that necessary communication (I would like to hear him sing to a live audience).  This is a great shame as he is clearly an intelligent singer, not afraid to put in the work on the songs.  And there are some really good songs here - a couple of which are among my current favourites (The Isle of France and The Flandyke Shore) - but not as sung by Jack Crawford.

Sorry to be so negative; I wanted to like this CD, but it really is a bit of a disappointment.