High Level Hornpipe / Cork Hornpipe / Harvest Home;  Under The Double Eagle;  The Harry Lime Theme;  Amazing Grace / Scotland the Brave / The Barren Rocks of Aden / Bluebells of Scotland / Atholl Highlanders;  Sch—n Rosmarin;  The Bonnie Lass of Bon Accord;  Daisy, Daisy / She Was a Sweet Little Dickie Bird / I'll Be Your Sweetheart / If Those lips Could Only Speak / I Don't Work for a Living;  79th's Farewell to Gibraltar / Broom's Reel;  Cuckoo Waltz;  Dulcimer Duet with David Kettlewell: Bluebell Polka / Soldier's Joy;  Danny Boy / With My Shillelagh Under My Arm / If You're Irish Come into the Parlour / Irish Washerwoman;  Stranger on the Shore;  The Laird of Drumblair / Road to the Isles / Phil the Fluter's Ball;  The Robin's Return;  Isle of Capri / Play to me Gypsy;  The Blackthorn Stick / Connaughtman's Rambles / Father O' Flynn;  Mandoline Serenade / Limelight;  Old Folks at Home / Golden Slippers / O Susannah;  Coming Through The Rye / Wi' a 100 Piper's / O'er the Stream to Charlie;  When Life's Dream is O'er;  Meet Mr Callaghan / Silver Threads Among the Gold / Moonlight and Roses;  Believe Me if All those Endearing Young Charms;  Ye Banks of Ye Braes / 79th Farewell to Gibraltar;  After the Ball / In the Shade of the Old Apple Tree / Old Bull and Bush;  Mona Lisa / Wheels.  Duration: 61:46

Forest Tracks is a small company specialising in the music and song of my home patch, Hampshire's New Forest and surrounding areas.  They began work in 1970, started issuing LPs in 1972, but had a quiet spell from 1977 to '88 when they began issuing cassettes, the last of which came out in 1996.  Another quiet period followed the death of Dave Williams in 1997, but they began issuing CDs in 2001.

It would appear that 2000 brought some personnel changes in the small group of enthusiasts who run it, a website (at www.forest-tracks.co.uk), and a bespoke CD-R service where you contact them with the title and number of the recording you are interested in and, if they are not intending to re-issue it in the future, they'll cut you a 'one off' copy with original cover artwork and notes for È12 inc UK p&p.  Contact: bespoke@forest-tracks.co.uk for more details of this service.  Paul Marsh is described (on their website) as 'the driving force behind Forest Tracks' revival' 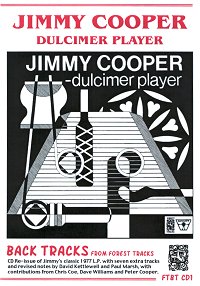 and his name will be familiar to readers both as the kind friend who helped me in the first faltering steps of Musical Traditions Records back in 1998, and as the man behind Topic's superb double CD Harry Cox: The Bonny Labouring Boy (TSCD512D) and author of much of its excellent booklet.

Moving to the present, 2003 has now brought us this CD.  Far be it from me to suggest that Forest Tracks have taken a leaf or two from MT's book, but it appears to be a CD-R, it comes in a DVD case, and has an integral 20-page booklet.  All of which seem eminently sensible ideas to this reviewer!  It's also a re-release with additions.  It's a reissue of Jimmy Cooper's classic 1977 LP Jimmy Cooper - Dulcimer Player, but Paul has remastered it (excellent sound throughout) and it now has seven extra tracks - four never before issued - with a revised and updated booklet including an interview with Jimmy's son, Peter.

Unlike the Harry Cox production, very little of this present booklet has been actually written by Paul.  There's a short introduction by David Kettlewell about the dulcimer in general and Jimmy's in particular, leading on to a longer piece about how he learned to play and make the instruments - much of which is made up of direct quotations from Jimmy himself.  This is followed by an edited version of the 1977 Traditional Music Magazine article, again, all of which is Jimmy's own words.  (This involves the only mistake I've noticed in the booklet - a 'credits' citation on the final page says it's a Musical Traditions article ... which was a little alarming, as I couldn't remember there being one!)

The booklet continues with two short appreciations from Dave Williams and Chris Coe, followed by a long interview with Jimmy's son Peter, now in his seventies, about his youthful memories of his Dad, and his later playing with him on numerous gigs.  The whole thing paints a detailed and fascinating picture of the man and his music - particularly the first hand accounts from Jimmy and Peter - and show us what an exceptional musician, and man, he was.  It's rare for a record producer to be able to get hold of substantial, first hand, information of this sort, but it really makes the booklet a worthwhile read.  Congratulations to Forest Tracks on a splendid job.

The CD, too is a splendid job, and an extremely interesting one.  Even before playing a note, the track listing, combined with what one has gleaned from the booklet, shows us that Jimmy Cooper's principal love was playing for people - the performance rather than the music.  There are three main types of music on the record: pop or popular tunes and songs; 'folk' tunes; and speciality pieces.  The great majority of the repertoire falls into the first category.  Most of the 'folk' tunes are the standard Irish ones he might have heard earlier in his life and brought back into the repertoire when he began working with the folk revival in his latter years.  The 'speciality' pieces are few and far between.  From all this, plus the fact that scarcely a tune title is mentioned in the sections containing Jimmy' own words, leads me to the conclusion that he built his repertoire for its function - he learned to play the tunes that people wanted to hear, rather than those he particularly liked.  What he loved was the playing itself; most particularly the playing with others in small groups and bands.  This comes out over and over again in the booklet.

What follows now is pure speculation on my part, but it does seem to me that Jimmy and the many other musicians like him tend to be the products of an urban society which did not support an indigenous musical culture - there are no repertoire items which might be termed 'local'; a direct contrast to the countless village musicians and singers we know about.  Consequently, it's not the tunes which are of interest here, but the playing - which seems to be exactly as Jimmy would have wanted it - and he certainly delivers some truly marvellous examples of that on this CD.

The other thing he loved was making the dulcimers.  The piece by his son Peter is fascinating here; Peter is a pianist, a piano tuner, and has done a lot of work in the piano trade.  He knows how stringed instruments work.  His accounts of the lengths Jimmy went to to get his dulcimers sounding just right, the technical sophistication of his instruments (despite the crudeness of their construction), using skills he'd developed partly through intelligent observation, partly by intuition, are quite extraordinary.  For someone like me who's spent a lifetime designing and making things, this was absolutely absorbing - even exciting!

So - last, but by no means least, we come to the music.  Unfortunately though, in my view, we start with perhaps the least good track of the entire 25.  It's the High Level Hornpipe, etc, which is very untypical of Jimmy's repertoire and contains (equally untypically) a number of mistakes toward the end of the track.  Worse, the guitar accompanist seems unsure of the chord structure on the last two tunes - and unsure of the rhythm throughout.  He fares much better on the march Under The Double Eagle on track 2, as does Jimmy, with a middle section where he first plays a low melody against high trills - and then repeats it with the melody still in 4/4 but the trills in 3/4.  Wonderful!

The Harry Lime Theme skips along in great style with nice organ backup (the only other complaint about the booklet is that it's not always possible to see who's doing the accompaniment), and track 4, a Scots medley, begins with a superb Amazing Grace (which is an English tune, by the way) where the dulcimer could so easily be a mandolin, on aural evidence.  There's really no point in going through each of the tracks in turn - all are lovely - but a few highlights ought to be pointed out.  Sch—n Rosmarin is one such, and one of the few speciality pieces mentioned earlier, as is When Life's Dream is O'er.  Other mandolin-style renditions of Danny Boy and Mandolin Serenade are impressive, while the final track, a solo from Jimmy of Mona Lisa / Wheels makes a fitting and glittering finale.  This was a man who, despite his 69 years at the time of recording, could play the hammered dulcimer better than anyone I've heard - a splendid record, and heartily recommended.

The CD costs È12.50 inc p&p UK and is currently exclusively available from www.forest-tracks.co.uk (click on 'Back Tracks' for more information and a full track listing and MP3s) or via e-mail: orders@forest-tracks.co.uk