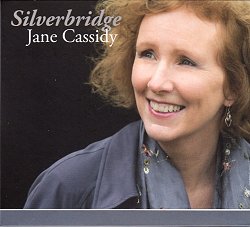 When Jane Cassidy sings at a traditional gathering, a perfect hush falls on the room.  Her pure voice compels you to listen attentively and her new CD, Silverbridge, provides ample opportunity for us to absorb and enjoy Jane's interpretation of a wide variety of songs - including three of her own compositions.

An experienced broadcaster, writer and producer, Jane has chosen mostly ballads and story songs for the CD, including several warnings to young girleens in times before the sexual revolution began, when love meant waiting - and sex meant babies, with potentially tragic consequences for a young woman's future life.

Her opening track, Silverbridge, is a poignant meditation on our brief journey through Time.  Composed by Jane herself, here we first encounter the diverse collection of musicians who so sensitively accompany many of these songs.

Nollaig Casey's fiddle playing is of the sweetest, adding an inventive layer of harmony whenever she appears. Piano is added with a light touch by Jane's daughter, Anna Leyden, bringing shape and movement to the inner verses particularly.  And of course the blend of voices, when mother and daughter sing in harmony, is everything you could wish.

Rod McVey on synthesizer seems to provide an invisible depth that makes longer notes linger satisfyingly - his playing always unobtrusive, which is just right for such thoughtful material.

Also appearing on Silverbridge, Barry Carroll on hammer dulcimer adds soft, twangling, fairy-like touches that lift the whole accompaniment. Not one of these musicians merely plays the tune - enabling Jane's voice to sail through the centre in a way that perfectly captures her song's mood and brings the words, so crucial to this whole recording, to the fore.

Other tracks that stand out include The Wager - a chilling ballad which Jane has set to a dark, original melody of her own.  A murderous lover awaits his girl but falls asleep in the bonny broom field with his knife in his hand, a sparse accompaniment adding to the suspense as we wonder what will happen next.

Jane's lovely rendition of The Cuckoo, in a version learned from the great singer, Anne Briggs, is a highlight of this CD.  The cuckoo's call echoes throughout the melody and Jane's unaccompanied voice - and perfect intonation - reminds us of the bird itself.

Johnny Scott is an action-packed traditional ballad telling of a valiant Irish prince and lover - and includes a welcome blast of uileann pipes from Joe McHugh.  Rousing stuff!

Defiance is the emotion Jane leaves us with by the end of her tender re-telling of the Sussex ballad, Gathering Rushes - beautifully arranged here and sung in a way that enhances the predicament of an unmarried young mother a hundred years ago and more, facing down the gossips to help her little boy grow up without shame.

The powerful ballad of Fair Annie, with roots as far back as 1200, appears here in a version from Dungiven in County Derry.  And Jane sings with real conviction of Annie's agony as her husband seeks a new wife - what better time for another burst of the pipes from Joe McHugh!

Concluding this cross section of fine songs from the Sam Henry, Cecil Sharp and Greig Duncan collections, among others, are two more originals from Jane: Naoise O'Haughan - the tale of a rapparee from the Belfast hills who was hung in 1720 - and the appropriately named final song on this CD, Last Man Standing - another epic tale of endurance and bravery, set in the cruel Arctic of the 1840s and providing us with a haunting chorus.

Silverbridge delivers an excellent choice of twelve songs on the human condition, often in unusual arrangements, their universal themes delivered with imagination and true empathy through Jane Cassidy's warm, sensitive singing.  For ballad lovers, this recording is a must.